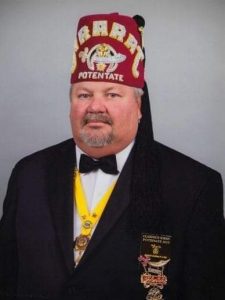 He grew up on a farm south of Odessa, MO and was a graduate of the Class of 1974 of Holden High.

Clarence was an active member of the Masonic and Shrine fraternities.

He began his journey in 1980 at Mount Hope Lodge #476 and later held dual membership with Harry Truman Lodge #1941.

He was a member of the Scottish Rite Bodies Valley of Kansas City.

Clarence was active at Ararat Shrine Temple, where he was a member of the Motor Escort and various clubs, including Richmond, Sedalia and Liberty.

He served as Illustrious Potentate in 2015 and was a member of the Order of Quetzalcoatl and the Royal Order of Jesters.

Visitation was held from 5-7 p.m. on Sunday, February 27, at Park Lawn Northland Chapel, in Liberty, MO.

A Masonic Service and Rose Ceremony by the Royal Order of Jesters was held at 10 a.m. on Monday, February 28, at Park Lawn Northland Chapel.