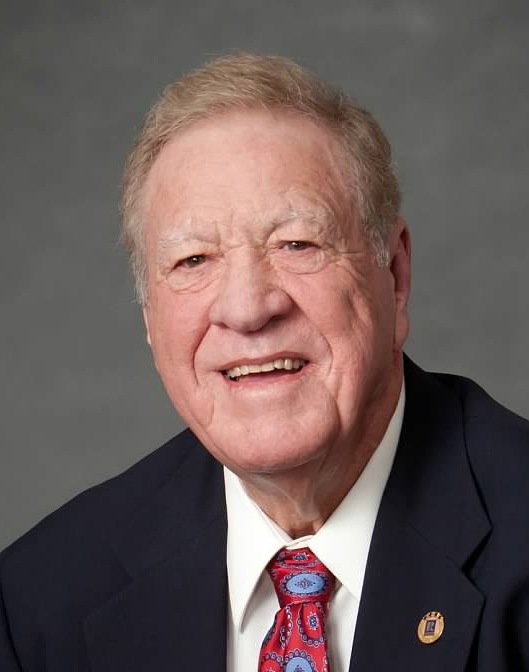 He was born on August 27, 1929 on the family farm in Elm, Missouri, the son of Jesse and Bonnie (Beall) Maloney.

Elvin was a lifelong resident of Johnson County.

He grew up and spent his formative years on the family farm.

For elementary school, he attended the one-room schoolhouse that is now on display at the Johnson County historical grounds in Warrensburg.

He was a graduate of Holden High School.

Soon after graduation, Elvin was drafted and served in the Korean War.

Elvin served in the U.S. Army as a medic in Korea and he was a conscientious objector, due in large part to his beliefs as a Seventh-day Adventist Christian.

After returning from the war, Elvin had many jobs that included farming, concrete truck driver, and cutting and delivering firewood.

In 1959, he came to Warrensburg and started selling real estate at Action Realty Co.

He soon became the broker/owner and over the course of decades, established Action Realty Co. as a legacy business and fixture in the community.

In addition to selling real estate, Elvin was a real estate developer and developed many of the subdivisions in Warrensburg.

In the last couple of years of his life, one of the things he most enjoyed was being driven around Warrensburg to see his properties, as well as look at any new developments and projects being built in Warrensburg regardless of the developer.

He was a lifelong promoter of Warrensburg.

Elvin was one of the founding members of the Midwest Missouri Board of Realtors that established the first Multiple Listing Service (MLS) for the area. In 1999, he received the Realtor Emeritus Status given by the National Association of Realtors.

This designation is given to a realtor member who has held membership in the National Association as a realtor for a cumulative period of 40 years.

In 2004, he received the Lifetime Achievement Award from the Midwest Missouri Board of Realtors for his many years of service and leadership on the board.

Elvin attended and was a lifelong member of the Kingsville Seventh-day Adventist Church.

In his later years, he attended the Warrensburg (Crossroads) Seventh-day Adventist Church.

In addition to his love of working, Elvin loved visiting with people, traveling, working in his yard, watching the Kansas City Chiefs, and spending time with his grandsons.

He is also survived by his sisters, Carole Ford, Kingsville, Missouri and Janice Reynolds and husband, Robert, of Pleasant Hill, Missouri.

Elvin was preceded in death by his parents; his first wife, Lorene Maloney; his brother and sister-in-law, Norman and Billie Maloney; and his brother-in-law, Bill Ford.

Visitation will be Thursday, September 16, 2021 from 6-8 p.m. at Williams Funeral Chapel in Warrensburg, Missouri.

Burial will follow at the Elm Springs Cemetery with full military honors.

In lieu of flowers, memorial contributions are suggested to the Summit View Adventist School and may be left in care of Williams Funeral Chapel.