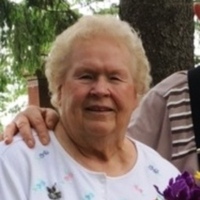 Lois spent a significant amount of her childhood with her maternal grandparents on their farm outside of Westby, Wisconsin. She later lived with her mother and sister in Detroit, Michigan, before moving to Kansas City, where she graduated in 1955 from Center High School.

The couple made their home in Holden, and Lois continued working at Bendix until she and John started a family. They had three daughters, Kari, Kris and Karen. Lois cared for her family while also volunteering for Hospice, a local church organization named FISH that provided rides to the elderly, and with the Holden High School Band-Aids organization.

She was also a Girl Scout leader. Lois returned to work as the girls got older, working for the Internal Revenue Service. Lois worked as a paraprofessional in the Holden Elementary School, and later worked as a substitute teacher until her retirement.
Lois and John enjoyed traveling, attending many national post office conventions throughout the United States. After retirement, they traveled to Norway to visit Lois’s grandfather’s homestead, which remains in the family. During this trip, a friendship was formed with two sisters from Australia, which led to Lois and John traveling to spend several weeks in Australia with their new friends.

One of the friends later came for an extended visit with Lois and John in the United States. This special friendship continued with many emails, letters and gifts being exchanged for more than two decades.

Lois enjoyed sewing and quilting and was a voracious reader. She and John spent many years camping from spring through fall and enjoyed having their children and grandchildren join them as guests. They made many lasting friendships with their camping buddies from the campground.

Lois was preceded in death by her parents; parents-in-law, brother, Frank Mortenson; and sister, Verna Mortenson.

There will be a private graveside service at the Missouri Veterans Cemetery at Higginsville.

There was an open viewing from 1 to 4 p.m. Sunday, May 9 at Williams Funeral Chapel in Holden.

lieu of flowers, memorial contributions are suggested to St. Luke’s Mid America Heart Institute or to Phoenix Hospice, in care of the funeral home.