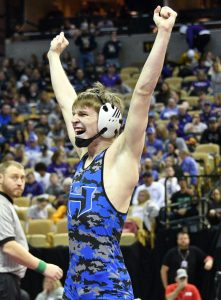 Holden wrestler Logan Yoder closed out his senior season by collecting the third all-state finish of his career with a fourth-place finish at the 2022 MSHSAA Wrestling Championships at Mizzou Arena in Columbia on February 17 – 19.

Earlier this season, he captured the 100th win of his career.

His fourth-place finish at the state championships this season improves upon the two all-state sixth-place finishes he turned in during his sophomore and junior seasons, and an early exit from the tournament during his freshman campaign.

“He made it easy,” said Holden wrestling head coach John Jones in regard to coaching Yoder for four years. “He made it easy to do. He’s always had the potential, but potential doesn’t mean anything without action.

“Everything has to have action. Knowledge minus action equals zero. You can have knowledge, but if you have no action, it doesn’t mean anything.”

The team veteran with the most experience on the Eagle wrestling team put in extra offseason work, and made notable sacrifices over the past year in order to try to improve upon his back-to-back sixth-place finishes the past two seasons.

“This was definitely the hardest wrestling season I’ve ever had, but I think me having the most success out of this year is a tribute to how much I’ve improved over the years.”

Yoder’s route to the medal podium this season started with a first-round win by decision with a score of 9-7 over Palmyra wrestler Brayden Phillips.

“My first-round match was really hard,” said Yoder. “I was winning against him last time I wrestled him, and he ended up pinning me. So I just came in with a different mindset, a different approach, and I narrowly pulled it off. I was happy with that.”

Yoder pinned Valle Catholic wrestler Joseph Flieg in the quarterfinals on the second day of the tournament.

A loss to St. Pius X (KC) wrestler Marco Dalakishvili in the semifinals pushed Yoder to the consolation side of the bracket.

“I wasn’t really happy with the outcome, but I felt I wrestled him really well,” stated Yoder. “He was pretty tough.”

The senior Eagle wrestler responded with a win by pin over Draken Bennett from Maysville in the consolation semifinals.
Yoder’s pin of Bennett sent him to the third-place match.

A familiar conference opponent, Conner Teat from Richmond recorded a win by pin over Yoder in the third-place match.

“At the end, I finished wrestlebacks winning the one I needed to get higher (than sixth-place). It didn’t turn out how I wanted to in that third-place match, but I’m happy.”

“Everything he’s saying was our game plan,” said coach Jones when the topic of Yoder’s mental approach of taking one match at a time came up. “He has that memorized, and it’s all him.

“Speaking of mental games, I’ve got one guy right here who is the master of that. I’m going to go on record. I’ve coached wrestling…more than 25 years, and I have never had a person who can lead like this guy. Coach Franklin who has coached for a long time said, ‘Only once in a blue moon do you have a senior like Logan. I’ve only had one other kid on his level.’”

Yoder summed up his senior state meet at which he was joined by returning state qualifier and medalist Daylen Greene, and first-time state qualifiers Carson Moreno, Aiden Christian, and Graysen Thieman. The senior also described returning to compete at Mizzou Arena after the state mee was held in Independence last year.

“I was glad to see the team here with me,” said Yoder. “I wish we could have taken a few more, but I was so happy.

“It’s amazing. Over at Cable-Dahmer it’s just not the same atmosphere. The atmosphere here is incredible. I love it so much.
“It didn’t turn out how I really wanted, obviously, but I’ve been really exhausted,” continued Yoder. “This whole tournament has taken a giant toll. Also, I was sick.”

Standing next to Yoder, coach Jones chimed in, “First off, this is the first I’ve heard he was sick because he never acted sick, and he never said that he was sick. He keeps that stuff…he doesn’t make excuses. That’s what he does.”

Yoder wrapped up his state championships experience by noting, “I also just want to thank the coaching staff. We had a really good year, and honestly, I don’t think I could have been the leader that I was without coach Jones and all the other coaches who have helped me throughout my career.”

Yoder finishes with a senior season record of 39-7.