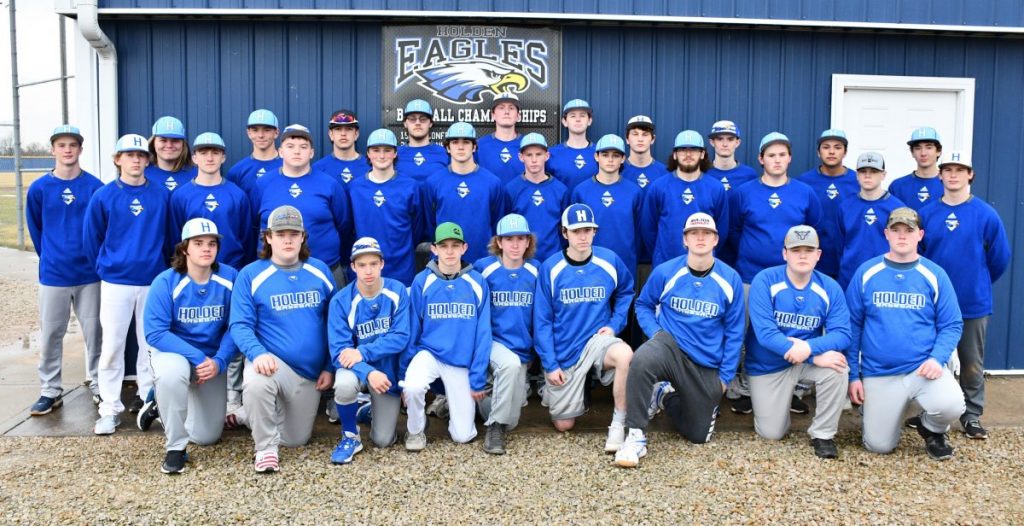 Coming off the cancellation of the 2019-20 season due to the Covid-19 pandemic, the Holden Eagles baseball team is set to begin regular season action with two games at Reed Springs High School this weekend.

Preparation for this season kicked off outdoors under clear skies before rain late last week forced the ball team inside as 22nd-year head coach Dave Riley acclimates himself to several new faces on the team looking to fill a roster with no returning starters.

“Last season, we were just getting to see what the young guys had been exposed to, and how we were going to plan to develop them for high school baseball when we were shut down,” says coach Riley who retains baseball coaching duties this season after retiring from teaching last year. “The players have jumped right back in, and are giving us some great effort during practice to prepare for the upcoming season.

“The lineup will see NO returning starters from the last time we had games, and will have players in key positions who have never played an inning of high school baseball,” emphasizes coach Riley.

Seven graduated regular players from the 2018-19 season, and the graduation of three senior starters who were set to play last year leave a clean lineup card to fill this season.

“They played key positions, and were team leaders in different ways.”

Pieces to this year’s lineup are falling in place with competition for starting and backup roles marking early practices.

“We do not have the lineup etched in stone as we are still evaluating daily with some great competition for playing time from a number of guys,” says coach Riley.

Seniors will look to fill some key roles with underclassmen making an impact in the selection process.

“Ryan Miller, a senior, looks to start the year as our catcher,” reports coach Riley. “Ryan got some time behind the plate in 2019 before breaking his arm during a game.

“Garret Smith, a sophomore, will be looked to for important innings on the mound, and will play corner infield,” says coach Riley.

“Others who are battling for time are seniors Andrew Hyatt in the outfield, and Wyatt Barron in the infield.

“Sophomore Justin Radunsky will see time in the infield or outfield, and sophomore Carson Gard can play anywhere we need him which is great for us to have that flexibility,” says coach Riley.

“Pitching will be our big question mark going in,” notes the head coach. “We have a handful of guys who have put in the time to be ready for the season, now we need some complimentary pieces to fill out the rotation.”

Leadership, at least early on for this year’s team looks to come from the guy wearing the catcher’s mitt at the start of the season.
“We hope to see someone step up, and take some ownership of a leadership role,” says coach Riley. “Ryan Miller has shown signs so far of being one.”

The first conference game for the Eagles is scheduled for March 29 in a home game against Knob Noster.

Two years ago, the Holden baseball team posted an MRVC-East mark of 5-5 to finish second in conference play.

“I have no real sense of a conference race this year coming off the lost year,” says coach Riley. “Holden will put an emphasis on our conference games, and attempt to get back to the top of the MRVC-East. We plan to give it our best shot, and see where that has us. It should be a fun year.”

Coach Riley looks forward to the renewed opportunity for the baseball team to compete on the field this season.

“I am excited for just getting back to some sort of normalcy of having a baseball season,” says coach Riley. “It was devastating for those seniors who did not get to play their last year of high school baseball.

“The time spent over the years with our guys at practice, games, bus rides, watching them in other sports or activities, and even having them in class always is tough to take when it ends,” says coach Riley. “The way last year ended, the forced ending that no one wanted, made it hurt even more.

“So getting to see the guys in their uniforms, and hearing the sounds during the games will be like a dream come true for this coach,” concludes coach Riley.

Normalcy is set to return for the Eagles baseball team with the start of the 2020-21 season set for this Saturday, March 20 in a two-game varsity match-up at Reed Springs High School. Holden plays Crane at 1:30 p.m. That game is followed by a contest versus the host team Reed Springs Wolves at 4 p.m.