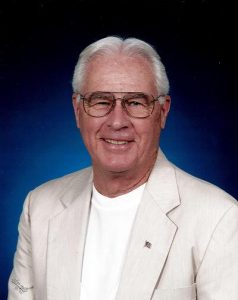 Bob was born on December 19, 1924 in Wichita, KS, as the only son of Blanche Weeks and Robert Lee Stewart.

The family moved to Holden, MO and Bob graduated from Holden High School in 1942.

He went to college for a year at Graceland before being drafted by the military into active service on April 13, 1943.

Bob served in the Army Air Corp as a navigator of a B-24 that flew 47 missions in World War II in Asia and the Pacific.

Bob continued to serve his country as a member of the Air Force Reserves, based in St. Joseph, MO until his discharge in June of 1972 with the rank of Lieutenant Colonel.

Bob was trained as a mortician, but spent the majority of his working career with the United States Post Office, retiring as postmaster from Centerview, MO after 33 years of service in 1981.

Bob married Ruth Elizabeth Markland on June 30, 1944 and they welcomed a son, Robert Douglas Stewart, to the home on November 25, 1946.

Bob and Ruth were an inseparable pair, traveling all across the country and serving their community of Holden in a variety of capacities.

Bob and Ruth spent many of their winters as snowbirds in Arizona.

It was in the church in Arizona where he met Gerry MacMillan and they were joined in marriage shortly thereafter on December 30, 2009.

Gerry passed away on December 10, 2010 from a short battle with lung disease, but during her 11 months with Bob she was shown all the sites around the Midwest that Bob had found joy in traveling to.

Bob met Sylvia Buchman and they were united in marriage on August 27 of 2011.

Sylvia and Bob shared a deeply connected relationship. They both loved Arizona, traveling, eating out and spending time with friends and family.

Sylvia has been the best partner that he and our family could ever have hoped for and she will remain a close part of our family gong forward.

Bob touched numerous lives in his 95 years and will be remembered for the respect that he showed to everyone he contacted.

May God bless Bob as he now rests, a rest that he has earned honorably.

Due to COVID-19 restrictions, attendees of the funeral service are strongly encouraged to wear facial protection.

Memorial contributions may be made to the Community of Christ Church of Holden, in honor of Robert “Bob” Stewart.