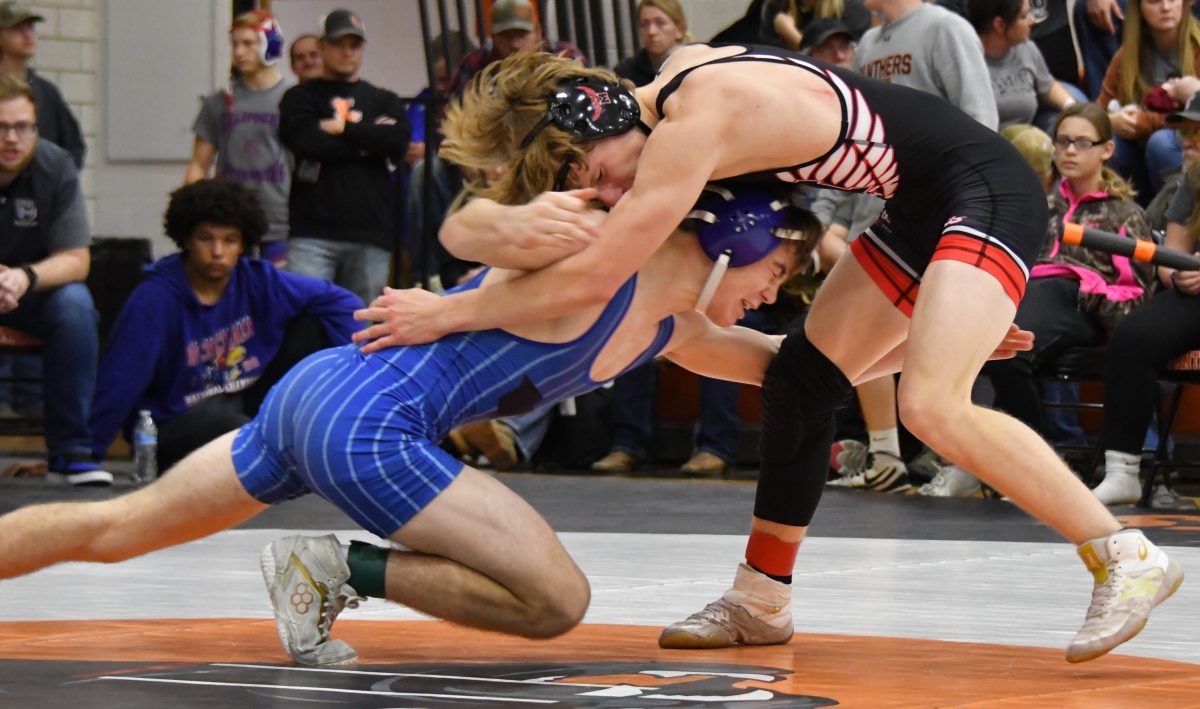 Gold Medal Shot… Eagle 126-pound wrestler Daylen Greene (bottom) takes a shot against his opponent during the first-place match at the Knob Noster Tournament on Saturday, Dec. 3. Greene won the match to collect the first-place medal. Photo by Steve Edwards

Greene recorded a win by pin the the championship quarterfinals, and followed that with a win by major decision in the semifinals.

In the first-place match, Greene recorded a win by decision over Marshall wrestler Trevor Bellamy.

“Overall, I thought it was not only a good team day, but I had a good day, too,” said Greene. “I felt like I improved on a lot of things I needed to. I wasn’t really familiar with any of the kids I wrestled today. I just wrestled every match the same, and never worried who I was going against.

“More importantly, we improved as a team on things we’ve kind of been struggling on these first few weeks. The coaches have done a great job getting us ready for it.”

Following a quarterfinal round win by pin, and a loss in the semifinals, Moreno defeated Knob Noster wrestler Levi Wilhelm in the third-place match.

Graysen Thieman at 113 pounds, and Andrew Johnston at 285 pounds each placed fifth.

Kody Conard at 114 pounds, Conner Carver at 157 pounds, Trent Stout at 165 pounds, and Tyler Stewart at 190 pounds each finished in sixth place.

Competing for the Holden JV team, Joseph Powell placed fifth in the 190-pound weight class as he and Stewart faced off in the fifth-place match.

The Eagles recorded a team win over Lone Jack, and fell to Oak Grove in a triangular meet at Oak Grove High School on Wednesday, Nov. 30.