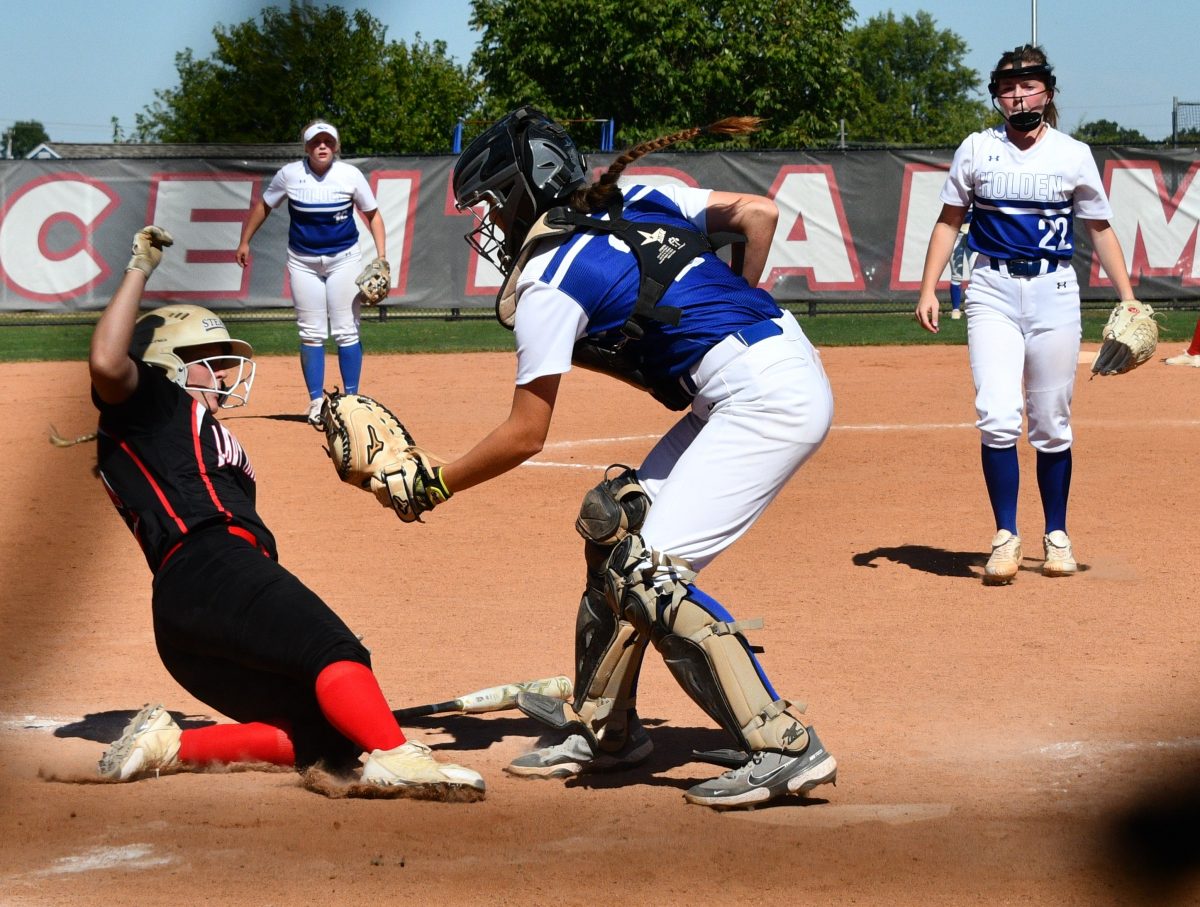 Guarding The Plate… Lady Eagle catcher Millie Davidson lays down a tag on a Sherwood base runner during the championship semifinal game at the UCM Tournament on Saturday, September 24. Teammates Kimmie Spring (back left) and Maddie Sechrest look on. Holden fell to Sherwood by the final score of 6-0. Prior to the loss, the Lady Eagles had won 10 straight games during a midseason win streak. Photo by Steve Edwards

The Holden softball team picked up a 7-5 road win over Carrollton on Tuesday, September 20.

Senior pitcher Maddie Sechrest recorded the win on the mound for Holden as the Lady Eagles plated four runs in the top of the seventh inning, and held off a late comeback effort by the Lady Trojans.

“Maddie once again pitched really, really well,” said Holden softball head coach Jeff Smith. “In the last inning we put up four runs on a big blast by Marah, and we kept it rolling. Kimmie got the double, and we kept going from there. We got some good hits at the end of that game, and it kind of gave us the cushion that we needed to win that one.”

Marah Klover’s home run in the final inning scored Sechrest ahead of her to put Holden ahead 5-3.

Following Klover’s home run, Kimmie Spring scored for Holden on an error committed by Carrollton on a hit by Millie Davidson. Freshman Lilee Keller drove in Davidson for Holden’s final run of the game.

Carrollton plated two runs in the bottom of the seventh in a comeback effort.

With two outs, and one runner on for Carrollton in the bottom of the seventh inning, Sechrest gloved a ground ball, and threw to Keller at first base for the final out.

Klover and Keller each had 3 hits in the game. Klover totaled 3 RBIs. Keller had 1 RBI. Sechrest had 1 hit, and 1 RBI. Spring had 2 hits. Faith Brown had 1 hit.

In a complete game performance, Sechrest allowed 5 runs (4ER) on 7 hits, and 2 walks while recording 5 strikeouts.
Versus Knob Noster

The Lady Eagles softball team started the back half of the MRVC-East schedule by defeating Knob Noster by the final score of 15-3 on Thursday, September 22.

Keller started on the mound for Holden. In 3 innings, Keller recorded 7 strikeouts, while allowing 3 runs (2ER) on 5 hits, and 3 walks.
Pitching in relief, Sisk worked 3 innings, allowing no runs on 2 hits, and 2 walks while striking out 1 batter.

“We came out just like played the rest of the last two weeks, and just came in on fire to beat a couple good teams,” said coach Jeff Smith.
Lady Eagle senior pitcher Maddie Sechrest started on the mound in both pool games. Sechrest allowed just 1 hit, and 1 walk against Webb City as she and the Holden defense held the Lady Cardinals scoreless in the run-rule shortened game.

Against Webb City, Abby Sisk had a home run in a 3-hit performance. Millie Davidson had 2 hits, and 3 RBIs as the Lady Eagles totaled 12 hits in the game.

Versus Belton, Sechrest allowed 1 earned run, and 5 hits while striking out 4 batters.

At the plate versus Belton, Sisk hit her second home run of the day. Sisk’s home run plated teammates Lilee Keller and Kameryn Rehfeldt. Marah Klover had 2 hits, and 2 RBIs.

Versus Sherwood, six Lady Eagles recorded hits with Klover hitting safely twice. Spring, Sisk, Rehfeldt, and Sechrest each had 1 hit.
“I was super proud of them,” summarized coach Smith of Holden’s overall performance in the tournament. “Yesterday, Maddie pitched both games, and gave up one run. She did just a phenomenal job. Abby pitched really well against Warrensburg, and honestly, Lilee pitched really well against Sherwood. We just made some mistakes behind her.”

Senior Maddie Sechrest, and sophomore Abby Sisk were name to the UCM Softball All-Tournament Team for their play in Holden’s four games in the tournament.

At the end of last week, the Lady Eagles softball team held an overall record of 14-7, and stood at 6-0 in MRVC-East play.

The Lady Eagles softball team hosts Higginsville for Holden’s Senior Night game this Thursday, September 29. The varsity game starts at 5 p.m., and is followed by a JV game.