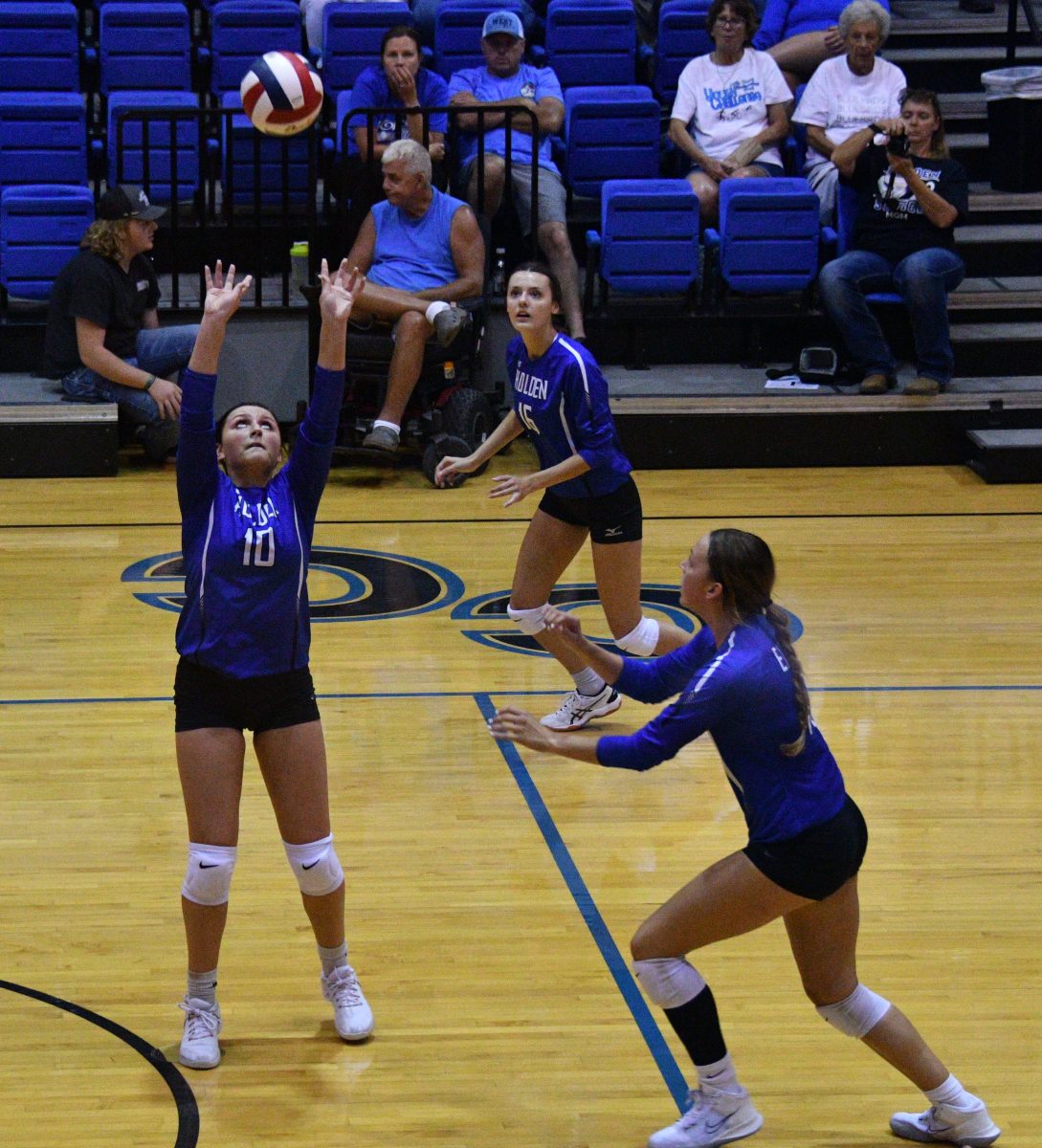 Setting Up For A Win… Lady Eagle senior setter Tristyn Powell (10) sets a ball for senior teammate Gracie Carver (front right) as senior Sara Ayler backs up the play during Holden’s season-opening match at Cole Camp on Tuesday, August 30. Powell had a team-high 23 assists in the match. Carver topped the team with 12 kills as Holden defeated Cole Camp by the final score of 3-1 for a Lady Eagles season-opening victory. Photo by Steve Edwards

“After the second set loss, I knew we had to cover our blockers, and hitters more,” said Holden volleyball head coach Tori Florence. “We adjusted well to that, and ended up winning the last two sets. Grace Carver had a total of 12 kills with Jaci Gower following behind her with 11 kills. Cami Agee and Tristyn Powell made those kills happen with setting the ball to our hitters.”

Powell put up 23 assists on the night.

J’Lee Jones served for 5 aces. Carver and Tristyn Powell each had 4 aces.

Jones added 3 blocks to her stat sheet to go with her service aces.

Gower totaled a team-high 23 digs. Powell, Alex West, and Agee each had 7 digs.

The Lady Eagles volleyball team closed out last week with a commanding 3-0 home win over the visiting Barstow Lady Knights.

“Barstow’s match was exciting,” said coach Florence. “It was fun to see the crowd get involved, and help keep the momentum for our team up. Alex West had a few blocks for us that were an important part of our defense. J’Lee Jones was able to execute the middle in kills that got us in the lead early during the first set.”

On Thursday of this week, the Holden volleyball team travels for a match-up against MRVC-West opponent Harrisonville with a JV match at 5 p.m., and a varsity contest to follow.

Next week on Tuesday, September 13, the Holden volleyball team travels to Odessa. The JV game against the Lady Bulldogs starts at 5 p.m, and is followed by a varsity match.

Correction…In the volleyball team preview article in the Thursday, August 25 edition of The Holden Image, freshman volleyball player Hailee Lloyd’s name was omitted from the list of incoming freshmen on this year’s team. The Image regrets the error.