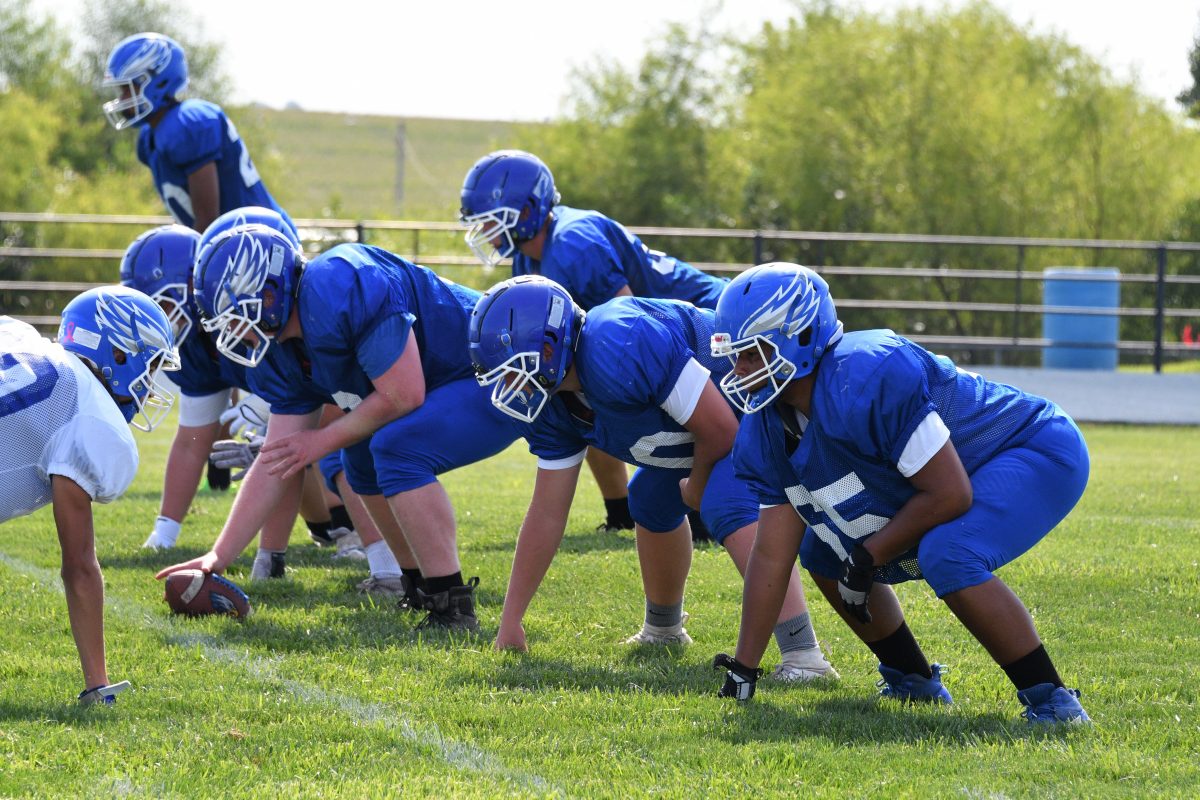 Set For The Season… Holden High School football, softball, volleyball, and cross country teams are in preparation for the upcoming fall sports season. Pictured, lineman on the Eagles football team set at the line before a play during a full team practice scrimmage Saturday, August 13. Preseason jamborees for the Holden high school sports teams begin this week with regular season competitions getting underway on August 26 (see related article). Photo by Steve Edwards

Holden High School sports teams enter preseason competitions this week and next week with the football, softball, and volleyball teams playing in jamborees.

The cross country team sees its first action with a regular season meet the first week of September.

“We are really excited to get our fall sports kicking off,” says Holden R-3 Activity/Athletic Director Spencer Gudde. “We started (practices) last week with all high school sports teams, and started this week with all middle sports.
“Our (high school) football team will play this Friday in Warrensburg for their jamboree. Softball will play Saturday at Lee’s Summit North for their jamboree, and (high school) volleyball will play next Wednesday in Clinton for their jamboree.”
The Holden high school sports teams, cheerleaders, band, and flag teams were introduced during Holden High School’s Meet the Eagles event on Thursday this week.
The Eagles football team kicks off preseason sports action with a jamboree at Warrensburg High School this Friday, August 19. Holden goes up against Warrensburg and Summit Christian Academy with team scrimmages beginning at 5:30 p.m. on Friday.
The regular season for the Holden football team begins Friday, August 26 with a road game at Sherwood High School at 7 p.m. The Eagles stay on the road in week two with a game at Mid-Buchanan High School on Friday, September 2.
The first home game for the Eagles football team is set for Friday, September 9 when Holden hosts Clinton in front of the Holden home crowd. Game time is 7 p.m.
The Lady Eagles softball team takes to the field in a jamboree at Lee’s Summit North High School this Saturday, August 20. Start time for the softball jamboree is 10 a.m.
The first day of school for Holden R-3 School District is Tuesday, August 23.
Regular season play for the Holden softball team begins with round robin games at the Greater Kansas City Tournament at Adair Park in Independence on Friday, August 26. The Lady Eagles play Liberty at 9 a.m., and Platte County at 2:15 p.m. on the 26th. Bracket play for the GKCT begins on Saturday, August 27 with times and opponents to-be-determined.
Following a road game at Pleasant Hill on Thursday, September 1, the Lady Eagles softball team opens home play on Tuesday, September 6 when they host Knob Noster for an MRVC-East game. The varsity game starts at 5 p.m., and is followed by a JV contest.The Lady Eagles volleyball team travels to Clinton for a preseason jamboree on Wednesday, August 24. The jamboree is set to begin at 5 p.m.
The first regular season match for the volleyball team is scheduled for Tuesday, August 30 in a match-up against Cole Camp on the road. Start time is 5 p.m. with C, JV, and varsity matches scheduled.
The volleyball team plays their first home game when they host Barstow on Thursday, September 1. The JV match against the Lady Knights begins at 5 p.m. and is followed by a varsity contest.

The Eagles and Lady Eagles cross country teams see their first competition on the course in a meet at St. Michael the Archangel on Saturday, September 3. Start time for the meet is 8 a.m.
Complete Holden activities schedules are available on the Holden R-3 School District website at holdenschools.org.
Posted in Sports