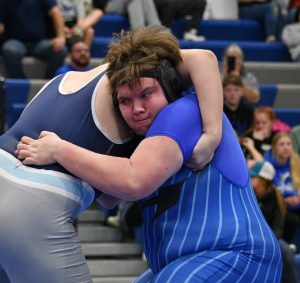 The Eagles and Lady Eagles wrestling teams hosted Father Tolton Academy and Clinton for Holden’s Senior Night Meet on Monday, January 31.
The Holden boys team took wins over both Father Tolton, and Clinton. The Lady Eagles team defeated the Clinton girls team in the team dual score.
Prior to the wrestling matches, senior wrestlers Logan Yoder and Chance Agcopra, and senior managers Laila Seiz, Nancy Beam, and Haylee Castaneda were recognized on the mats in a Senior Night ceremony.
“It was great,” said Holden wrestling head coach John Jones. “We wrestled well, and the reason we wrestled well is because we have a good program. The kids deserve it. We work really, really hard, and it pays off.”
The Holden boys team defeated Father Tolton by the final score of 51-22.
Wins by pin posted by Carson Moreno and Daylen Greene were followed with a win from 126-pounder Kale Tryon who scored a 2-1 win by decision.
Senior Logan Yoder at 132 pounds won by pin.
Lane Seimer followed two losses by Holden with a win by pin in the 160-pound match-up.
“Kale had an amazing match, and Lane had an amazing match,” highlighted coach Jones. “Lane really hustled.”
Tryon worked to a 2-0 lead in the second period, and held on for a 2-1 win.
“Tiring…very tiring,” described Tryon of his win. “The third period, when I rode out, that helped.”
Seimer pinned his opponent in the second period, and cited his shot attempts with leading to the victory.
Seimer noted, “My first takedown on the duck under,” helped him to the win.
Holden added a win by pin from CJ Reifsteck at 170 pounds, and wins by forfeit from Tyler Steweart and Aiden Christian.
Senior Chance Agcopra sealed the Senior Night win by pinning his Trailblazer opponent.
Tryon, a freshman, and Seimer, a sophomore both described the attributes that seniors Yoder and Agcopra bring to the Holden wrestling program.
“Logan’s always been a good partner for me,” said Tryon. “I never wrestle Chance because he’s a bigger guy. Logan’s always been a leader. Chance has always been the funny guy on the team.”
Seimer said, “They always want you to do your best, and they’re always there for you.”
Tryon chimed in, “They always want the team to do the best they can.”
The Holden boys wrestling team went on to defeat Clinton by the final score of 51-24.
Daylen Greene and Kale Tryon picked up wins by forfeit to open the team match.
Logan Yoder recorded a win by technical fall to put Holden ahead 17-0.
Trent Stout won the 152-pound match-up in a win by major decision.
Aiden Christian and Chance Agcopra each took wins by pin for Holden.
CJ Reifsteck, Tyler Stewart, Chance Agcopra, and Carson Moreno added wins by forfeit.
The Holden girls wrestling team took the team match-up against Clinton by the final score of 36-12.
Lady Eagles MaRaya May and Charlie Gregg fell by pin to their Clinton opponents. The Lady Eagles took the team win with points from wins by forfeit by wrestlers Tasia Lee, GiGi Jones, Aubree Castaneda, Valarie Justice, Jordan Sylvester, and Alex VanHooser.
Posted in Sports