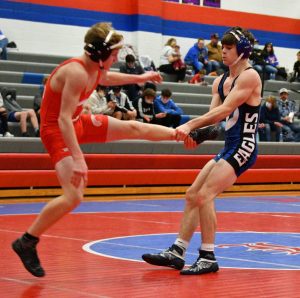 Grabbing A Victory… Eagle wrestler Daylen Greene (right) is pictured on his way to a win by pin against Carrollton wrestler Jorden Rennison on Monday, January 24. On Saturday, January 29, Greene placed first in the 120-pound weight class at the Odessa Tournament. Photo by Steve Edwards

Greene took two wins by pin, and a win by technical fall to earn his spot in the 120-pound title bout.

Greene completed his unblemished record at the tournament by defeating home team Odessa wrestler Gabe Studdard in a win by major decision in the first-place match.

Moreno recorded three wins by pin, and a win by medical forfeit to earn a spot in the
first-place match.

Holden wrestlers Kody Conard at 138 pounds, Aiden Christian at 220 pounds, and Chance Agcopra at 285 pounds each placed fifth at the tournament.