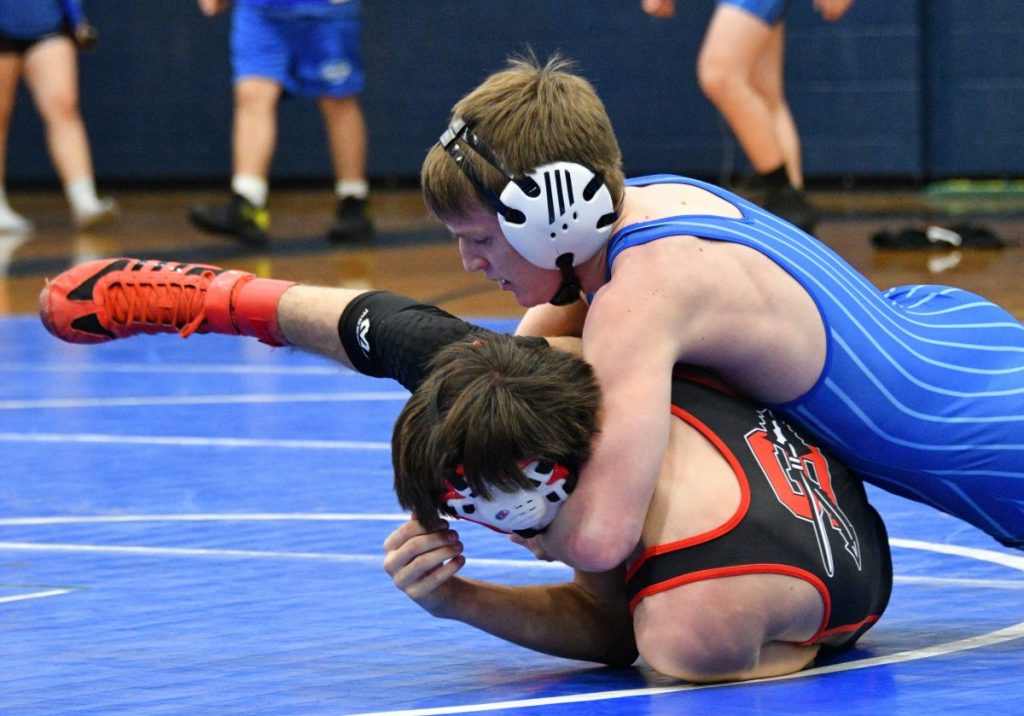 Matwarming King Pin… Eagle senior wrestler Logan Yoder (top) recorded a pin in the 132-pound match during Holden’s Matwarming dual meet against Sherwood on Thursday, December 9. Yoder was crowned as Matwarming king on the night, receiving the king crown for the second year in a row. Holden defeated Sherwood by the final score of 54-18 in the team dual meet. Photo by Steve Edwards

The Holden boys wrestling team won six matches versus two match wins for the Sherwood Marksmen in a commanding Eagles Matwarming win by the score of 54-18 on Thursday, December 9.

All six of Holden’s wins came by way of pin with Sherwood wrestlers taking two wins by pin.

Holden picked up points from three wins due to Sherwood forfeits. The Marksmen gathered one win by forfeit.

“I thought we did great,” said Holden wrestling head coach John Jones. “We went out, and performed. And we looked good doing it, I think. The kids looked great, and they were ready to go.

“There’s no love lost between us and Sherwood, and that’s great,” continued coach Jones. “Sherwood’s a good team. It was a good showing by us.”

Matwarming King Logan Yoder at 132 pounds wrestled to a win by pin.

Eagle wrestler Leo Quinn dropped his match to Blake Eads in the 126-pound match, and Tyler Stewart at 195 pounds was pinned by Marksman wrestler Clint Sullins.

Andrew Johnston closed out the night with a thrilling win by pin in the heavyweigth match-up.

“I thought CJ wrestled well,” highlighted coach Jones. “I thought Andrew wrestled well. Andrew’s our JV guy until Aiden Christian can get down to 220. So Andrew went out there, and he just whipped tail. It was the closing of the show.

“There are things that we can work on, and we’ll get better,” continued coach Jones as he added, “Logan looked good. Daylen looked good. Everyone who wrestled looked good.”

In the lone girls match on the night, Lady Eagle wrestler Aubree Castaneda fell to her Sherwood opponent by pin. The Holden girls team took wins by forfeit to win the dual.

This Friday, December 17, and Saturday, December 18, the Holden boys wrestling team competes at The Battle at The Katy Trail held at the State Fair Grounds in Sedalia. Times are to-be-determined.

This Friday, December 17, and Saturday, December 18, the Holden girls wrestling team competes at the Eldon Tournament. Times are TBD.