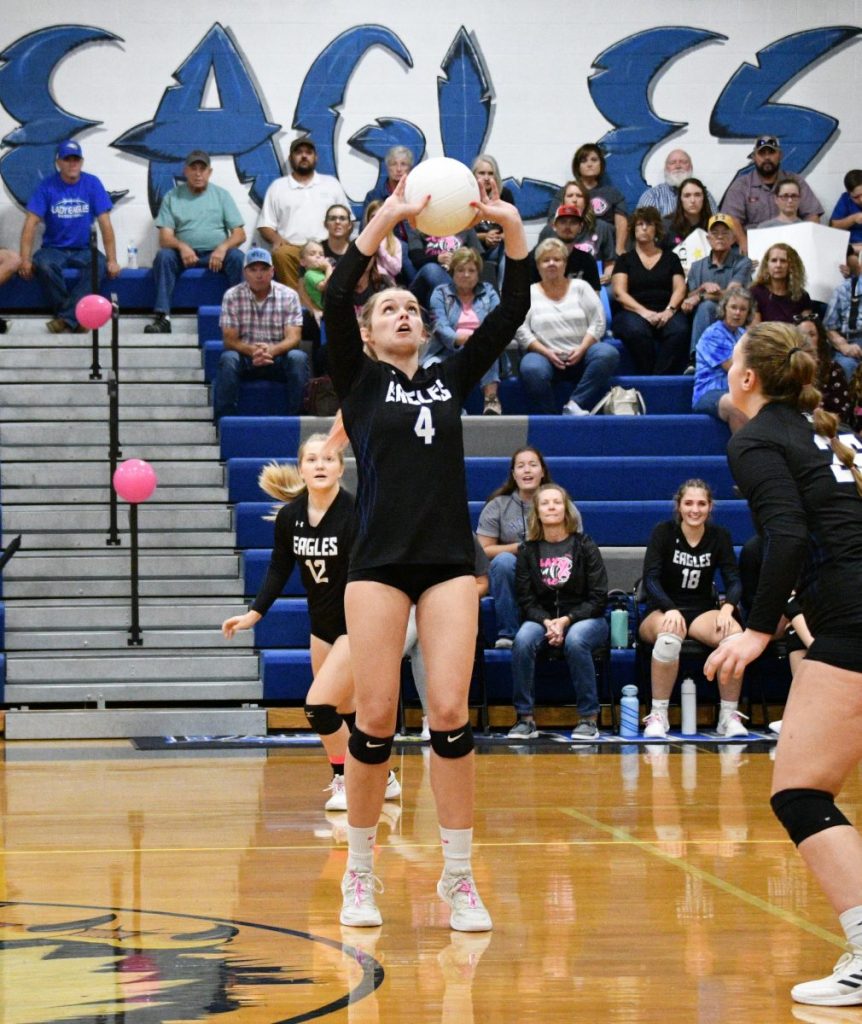 Setting Up For Victory… Lady Eagles senior Brady Hinton (4) sets a ball during Holden’s 3-0 home conference win over Higginsville on Thursday, October. With the win over the Lady Huskers, the Holden volleyball team won the MRVC-East Season Championship for the third consecutive year. Photo by Steve Edwards

The Holden Lady Eagles volleyball team completed a 2021 season sweep of all MRVC-East opponents by defeating Higginsville in a 3-0 final score on Holden’s home court on Thursday, October 14.

This marks the third consecutive year the Lady Eagles have captured the conference crown.

The Lady Eagles took the first set on the night on Thursday by a final score of 25-11.

“We came out on fire, and dominated the match,” said coach Carver. “Last time we played them, we battled back and forth, and tonight our girls just completely controlled every facet of the game.”

Holden took the second set by a 25-13 final score that included a five-point run to close out the set, and dominant defensive play at the net.

The Lady Eagles jumped out to a 7-2 lead in the third set, and limited point runs by the Lady Huskers for a 25-16 third-set victory to complete the undefeated season for the Lady Eagles.

“Undefeated conference champs is a great accomplishment,” said coach Carver. “I am super proud of the way they played tonight, and overall in the conference match-ups.

“Emma and Jaci led us with 10 kills, and they each had multiple aces from the service line.

“Now we have a week to get prepared for districts.”

Lohe had a team-high 11 digs. Gower followed with 10 digs. Slack had 8 digs. Hinton chipped in 4 digs.

Seiz had 2 total blocks. With 1 block each were Gower, Powell, and Gracie Carver.

The Lady Eagles volleball team ends the regular season with an overall record of 19-4-2, and an MRVC-East mark of 10-0.

“The girls took car of business tonight,” said Holden volleyball head coach Julie Carver. “Lilee Keller had a nice game playing the front row for Tristyn Powell, and Elaina Young played well in the back row for us tonight. We had good energy, and stayed pretty focused throughout the match.”
Lady Eagles Defeat Lexington

In a home volleyball match against conference opponent Lexington, the Lady Eagles volleyball team defeated the visitors in three sets (25-11, 25-21, 25-13) on Tuesday, October 12.

“Great conference win as we near the end of our season,” said Holden volleyball coach Julie Carver. “We are improving in some areas of our game that we have been focusing on like first ball defnse, and not giving up on the ball.

“We are trying to put together a run each, and every time we step back to the service line as I feel that mental focus can improve our outcome.”
Versus Lexington, Laila Seiz led in serving with 5 aces.

The Class 3, District 14 Tournament championship match is scheduled for Tuesday, October 26 at 6 p.m.