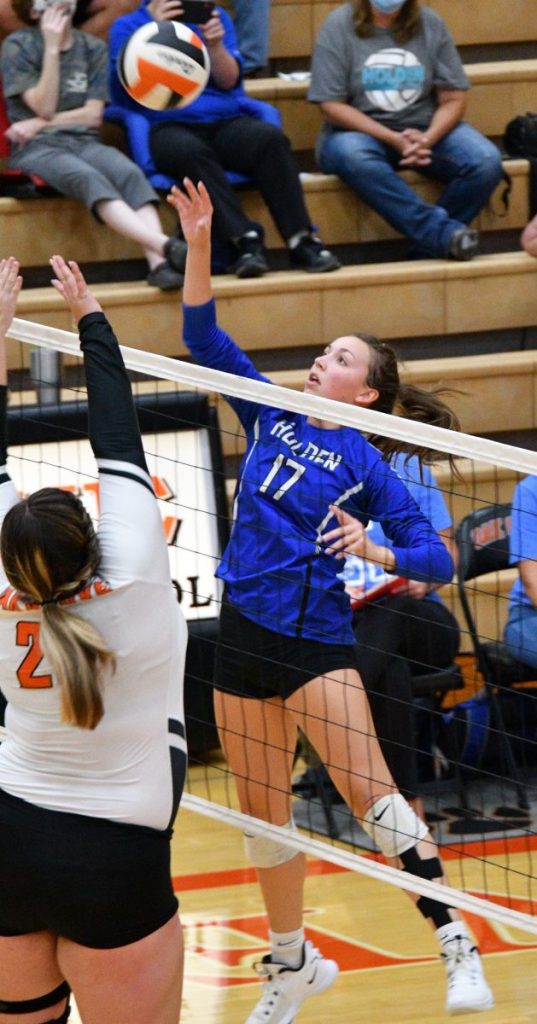 “We win it in five, and it was a hard-fought battle from the beginning,” said Holden volleyball head coach Julie Carver.

After winning the first two sets, the Lady Eagles fell behind 10-20 at one point in the third set.

Holden outscored Oak Grove 10-5 in the final points to fall by just five in the set.

The momentum built by the Lady Eagles in the latter part of the set continued into the fourth set, and ultimately into the decisive fifth set.

“We carried that into the next two sets, and got our confidence and swagger back,” said coach Carver of the late third set surge.

The head coach noted, “We need to improve our passing as we had Brady Hinton running all over the court.”

Hinton finished with a team-high 33 assists as Emma Lohe led the team with a 1.82 serve receive rating.

A total of 79 digs were gathered by the team’s four leaders in the category with Kalie Slack at 25 digs, Lohe at 24, Hinton at 18, and Lilee Keller at 12.

“Laila had a good night serving with four aces, and 100 percent serving,” highlighted coach Carver. “Brady was our leading attacker, and played really well. Gracie chipped in two blocks that were big.”