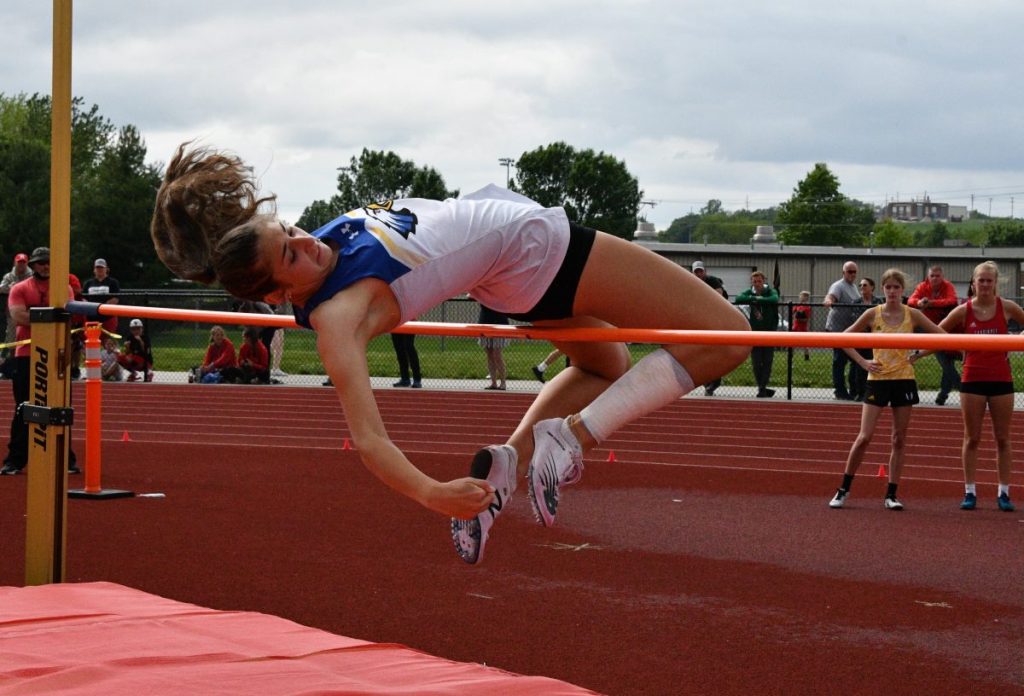 Soaring To State… Lady Eagle high jumper Marah Klover clears a height of 1.5m to place second at the Class 3, Sectional 4 Track and Field Meet at Odessa High School on Saturday, May 22. With the top-four finish, Klover qualified to compete at the Class 3 State Championships in Jefferson City on Saturday, May 29. Photo by Steve Edwards

Both will compete in field events at the Class 3 State Championships at Adkins Stadium in Jefferson City this Saturday, May 29.

“I think we performed well based on the conditions,” said Holden track and field coach Spencer Gudde in regard to the meet which featured a nearly two-hour weather delay as heavy rain moved through the area. “We could have been better, but overall, I am pleased with how the kids handled the adverse conditions.”

VanHooser earned her place at the state meet early in the meet, prior to the weather delay by placing fourth in the shot put with a distance of 10.65m.
“It was great for her to make it to state,” said coach Gudde. “I think she was really excited, and almost in a state of belief.

“It is great for her to finally make it to state. She is ranked right on the bubble of placing. If she throws well, she should be able to place.”

Later in the meet, the senior thrower placed seventh in the discus with a distance of 30.33m. VanHooser’s season, and her four-year career will continue for one more week with a chance to compete in the shot put in Jefferson City.

Klover’s state qualification came late in the meet with a second-place finish in the high jump. Competing with discomfort in her right leg on Saturday, the sophomore recorded a height of 1.5m.

“She is ranked right on the cusp of placing, and if she jumps her personal record (PR), she should place,” said coach Gudde of Klover’s outlook for the state meet.

Klover’s PR just so happens to be the Holden High School record. She recorded a height of 1.55m in setting that record in a meet at Higginsville High School this season on April 19.

“She has been fantastic this year, and I expect her to keep on those ways as we get ready for state,” said coach Gudde.
Klover, and teammates Emma Lohe, Gracie Carver, and Alli Iles composed the Lady Eagles 4x800m relay team at the sectional meet on Saturday. The relay team turned in a sixth-place finish in a time of 11:36.

The Holden girls 4x800m relay team entered the season with Lohe as the lone returning member with previous distance relay experience.
“They did well on the season as they learned how to run an 800,” said coach Gudde. “I expect them to be even better next season.”

The Class 3 Track and Field Championships will be held at Adkins Stadium in Jefferson City this Saturday, May 29.