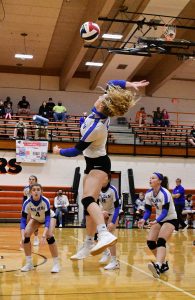 Surrounded By Teammate Support… Lady Eagle outside hitter Emma Lohe swings on a ball during Holden’s final conference match of the season at Knob Noster last Thursday. Teammates Brady Hinton (4), Lily Stoyko (behind Hinton), Tristyn Powell (8, partially hidden), and Laila Seiz (right) offer support as they back up Lohe on the play. The Lady Eagles defeated Knob Noster by the final score of 3-1 in the match to close out the season as MRVC-East Volleyball Champions with a record of 9-1. Photo by Steve Edwards

For the second season in a row, the Holden Lady Eagles volleyball team has added an MRVC-East Volleyball Championship trophy to the Holden High School trophy cases.

The Lady Eagles claimed this year’s crown with a 3-1 road win over Knob Noster last Thursday, October 22 in the team’s second road win of the week, and Holden’s final regular season match.

With the win, the Holden volleyball team finishes the conference season with a 9-1 record.

“Excellent win…excellent all-around team play,” said Holden volleyball head coach Julie Carver. “These girls are really playing as a team, and all that matters to them is that they get the “W”.

“They were under a lot of pressure in a loud gym, and played hard. They stayed intense and pushed through.

“It is super awesome to win the MRVC title back-to-back years. It has been a strange year, but this made it all worth it.”

The Knob Noster High School gymnasium maintained its reputation as a raucous venue in which to play during a Lady Eagles versus Lady Panthers volleyball match-up.

An eight-point run early in the first set helped boost the home team to a 25-21 win as the Lady Panthers found comfort in their home court confines.

“It is tough to lose the first set, and then come back to win the next three,” said coach Carver of the initial setback. “But our kids were pretty determined to defend that conference title.”

After the first game setback, the Lady Eagles found footing in the climb back to the conference peak by winning the second set with a 25-19 score.

A block by Lady Eagle outside hitter Emma Lohe for a point coming off a Lady Panther timeout put Holden ahead 7-1 early in the second set.

Holden maintained its lead late in the second set on an ace by libero Kalie Slack that put the score at 19-12.

Holden went up 3-0 at the start of the third set. A kill by Tristyn Powell put the Holden lead at 9-7 as the Lady Eagles began to distance themselves from the Lady Panthers.

A five-point run in the third set eased the pressure on the Lady Eagles by giving them a 16-8 lead. Holden closed out the set with a 25-18 advantage.

A kill by Lohe gave the Lady Eagles a one-point edge with the score at 23-22 before another Holden point put the visitors up 24-22.

Lohe dealt the final blow on a kill to give the set, and the match to the Lady Eagles with the 25-23 fourth-set win.

“I thought we played really well,” said coach Carver. “We played strong and confident most of the night.

“The girls are really playing team volleyball right now which means they are all in on doing whatever it takes to make that win happen.”
Play by both teams at the net made for some exciting points during the match.

Gracie Carver’s presence at the net resulted in 2 blocks for Holden. Teammate Tristyn Powell had 1 block.

“We tried to strengthen our blocking by moving some kids around at the net, and they seemed to be effective,” noted coach Carver.

“Overall, I thought we were strong at the net, and just played all-around good volleyball
“We served very efficiently, and that is a big part of our game,” added coach Carver. “We have overcome some of our serving problems that were popping up early in the season, and as a team we are serving very well right now.”

Seiz and Lohe each had 4 service aces in the conference-clinching match. Seiz posted a 100-percent serving percentage.
Slack finished with 3 aces. Powell and Jill Casey each had 1 ace.

Lohe led the team with 30 kills on a .308 hitting efficiency as she attacked from all angles on the court.

“I thought Emma was huge with 30 kills, but she doesn’t get those kills if her teammates are not playing good defense, passing well, and the setters aren’t putting up great balls,” said coach Carver. “So she had a great night, but only because of her teammates. Overall, we had several attackers step up with almost double digit kills in Laila and Brady.”

Hinton set the ball for 28 assists. Powell had 21 assists.

Lohe had a team-high 27 digs versus the Lady Panthers. Slack had 23 digs, and Seiz totaled 20.

With a win at Carrollton last Monday, a forfeit by Richmond in the second match of the season series between Holden and the Lady Spartans; and last Thursday’s win at Knob Noster, the Lady Eagles finish the MRVC-East season with a record of 9-1. Holden’s overall record at the end of last week stood at 11-3-1.

Coach’s Corner: Conference Conquest
“It was a great win, and these girls deserve the title of conference champs,” said coach Carver after wrapping up the MRVC-East Title with Holden’s win at Knob Noster. “It is a long road to the conference title when you drop your first match of the season.”
The lone loss suffered by the Lady Eagles in league play occurred at home against Lexington in Holden’s first MRVC-East match on September 24.

“It took a lot of steady play, and battling back and forth with some very good teams, and coming out on top to make it happen,” continued the head coach. “What stands out the most about this team is their ability to accept their role, and be a team player.

“I am super excited about this group of kids. They are working hard, they are learning, they are improving, and they want to be great.
They really do not care who gets the most kills, or the most aces as long as they win.

“That doesn’t mean they are not competing to try to have the most kills or digs or assists. They are competing to get better as individuals which in turn makes us better as a team.

“I really like their attitudes this year. They have been about team from the beginning. Great group of girls,” concluded coach Carver.