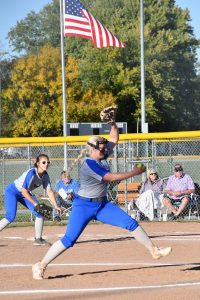 Lady Eagles Secure Undefeated Conference Season… Lady Eagles pitcher Kimmie Spring delivers a pitch to the plate during Holden’s conference game at Knob Noster on Monday, October 12. First baseman Luxy Pearce readies herself on defense behind Spring. Spring went two innings on the hill, allowing one run on two hits before being relieved by Peyton Kilgore who closed out the contest. Holden defeated Knob Noster 18-8 to finish the season with an undefeated MRVC-East record of 10-0. Photo by Steve Edwards

The Lady Eagles softball team completed its season sweep of all MRVC-East opponents by defeating Knob Noster 18-8 on the road last Monday, October 12.

Holden posted runs in all but one inning in the win that completed the undefeated MRVC-East Championship season for the Lady Eagles.
Camille Davidson totaled four hits, and four RBIs to lead the offense as starting pitcher Kimmie Spring and relief pitcher Peyton Kilgore each set foot on the hill to pitch.

“It was nice to be undefeated,” said Holden softball head coach Jeff Smith after the win. “It was kind of a battle of the offense a little bit, and we definitely won that battle.

“They had that one big inning, and I don’t think it was anything we did defensively, they just kept hitting the ball where we weren’t,” said coach Smith in noting seven runs scored by the Lady Panthers in the fourth inning.

With the two teams scheduled to meet the following night in the first round of the district tournament, neither team showed all of its cards in the contest.

“Peyton Kilgore came in and threw one heck of a game, and she had three hits,” highlighted coach Smith. “Tasia (Lee) at the plate looked really good. She had an RBI hit down the left field line. Kayla (Rokusek) got a good hit there, too.

“All 14 girls on this team could play for almost any team in our conference,” noted coach Smith. “We’re pretty lucky to have that, to be that deep, and be able to put players in there and get results out of all 14 players. That’s a big positive.”

Knob Noster’s seven-point fourth inning was the only threat posted by the home team on the night.

“Once we got through that one big inning, they didn’t do much else offensively, and we had some good defensive plays,” said coach Smith.

“Marah (Klover) in center had a big defensive play with two outs, and we made quite a few good plays up the middle with Kimmie (Spring) and Camille (Davidson).”

“I’m happy to start off my first year here, have a 10-and-0 record, and walk into an awesome group of girls,” stated coach Smith. “All 23 of them are excellent, excellent competitors, and they’re fun to coach.”

Versus Knob Noster, Davidson scored 2 runs in addition to her 4 hits, and 4 RBIs.

Spring pitched 2 innings in the start. She allowed 1 earned run on 2 hits while allowing no walks.

In relief, Kilgore pitched 5 innings. She allowed 7 runs on 14 hits, and 1 walk.