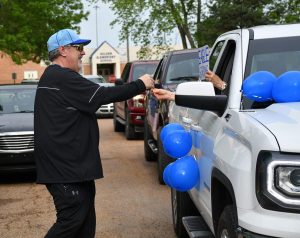 Holden R-3 physical education teacher, and Eagles head baseball coach David Riley announced in May that he is hanging up his number 44 coach’s jersey after 22 years in the Holden school district.

Coach Riley’s retirement comes at the end of an unprecedented series of events for school systems across the country after the Corona Virus pandemic disrupted the end of the current school year, and forced the cancellation of high school spring sports seasons.

“I have retired from teaching, so I am out of the teaching world,” said coach Riley in mid-May with his wife Debbie at his side. As a 1982 Holden graduate, coach Riley’s ties to Holden, and the R-3 district are numerous, dating back to 1980 when his parents Buck and Virginia moved to Holden.

“We moved here in 1980, the 1980-81 school year. My father got hired here as the athletic director, high school PE teacher, football, basketball, and track coach. “He and Mom taught here until they retired. When they retired, Debbie was teaching here, our oldest daughter Darcy taught here for one year, and I’ve been here for 22 years.

“This next year will be the first time in 40 years that there won’t be a Riley teaching at the Holden school.”

Debbie retired from the Holden school district in 2016.

Dave and Debbie’s children Darcy, Dani, and Dylan are all Holden graduates.

He finished his undergraduate courses at the University of Central Missouri, and received a master’s degree from Arkansas State University. 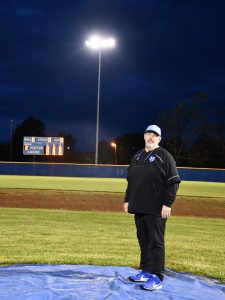 After student teaching at Pleasant Hill, then handling multiple duties in the Leeton school district for one year, Riley traded his black and gold Bulldog gear for his familiar Eagle blue and white.

“I did my student teaching at Pleasant Hill many years ago. I helped with baseball there, but I own no purple,” said coach Riley lightheartedly.

He continued, “I taught my first year at Leeton. I was the athletic director, K-12 PE teacher, head middle school basketball coach, head varsity basketball coach, head baseball coach, and I taught weights. “That was a great experience. I really enjoyed my year there working with the kids. I was driving down there every day, and the opportunity arose to stay here, to stay home.”

Teaching in the Holden school district was an attractive opportunity for the Holden alumnus. “It was what I wanted to do. My wife taught here, my father retired from here, and my kids were going to school here. I wanted to be closer to home.”

In his first two years at Holden, coach Riley served as the assistant baseball coach before taking the head coaching position.

He ends his career with 321 wins, 173 losses, and countless stories about the Holden baseball program that he led for the past two decades.

“That first team went 17-2, and the next year they went 22-1,” recalled coach Riley after sharing a story about how the head coach, the baseball players, the parents, the community, and he worked together to raise funds to buy new uniforms.

“There have been some interesting teams. The 2018 team would be the most accomplished team,” stated coach Riley in reference to the 2018 Holden Eagles baseball team which ended the season with the Class 3 Baseball State Tournament third-place trophy.

“Obviously, that’s our top season. You’ve got to put that right up there at the top. “We’ve had some teams that achieved maybe more than anybody thought we would.

Milestone win number 300 for Riley came during the historic 2018 season in a 9-1 win over Lawson in the first game of a doubleheader.

Now, two seasons after that record-breaking 2018 campaign, the head coach stands at the doorway to retirement somewhat unsatisfied due to the cancellation 2020 schedule.

With favorable weather lending itself to productive early-season preparation, things took a drastic turn in mid-March as the Eagles’ season opener approached.

“We were practicing, and we had a trip for us to go down and play at Crane,” recalled coach Riley of Holden’s season-opening doubleheader scheduled for Saturday, March 21.

“We were going to go down the night before, and watch Missouri State play. “It was coming up on that Friday we were leaving. Tuesday we were practicing, and that’s when it all hit. You could kind of see some things were coming. We had never been through this, so I didn’t think it would come to this.” 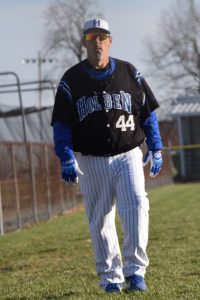 The games at Crane High School near Springfield were ultimately cancelled. “There were so many unknowns,” said coach Riley who like many held onto a hope that the season schedule could be salvaged with later games being played.

Holden was scheduled to play at Sherwood on Monday, March 23. “There was hope to play that Sherwood game,” said coach Riley. “If not them, we thought let’s take a week, two weeks, three weeks, then maybe come back, and let us play.”

The game at Sherwood was cancelled after a March 18 announcement by the Holden school district stated that the school would be closed March 23 through April 3.

The April 3 date was extended, and on April 9, Missouri Governor Mike Parson issued a statement ordering schools to remain closed for the rest of the academic year.

“It’s a sad deal,” stated coach Riley who added that he thought of the senior players first upon the cancellation of the 2020 season.

Holden’s Senior Night game would have been played on Monday, May 11 at home against MRVC-East opponent Richmond.

To honor the seniors who did not have the opportunity to play the final season of their careers, and to recognize the loss of the 2020 season, coach Riley illuminated the high school baseball field each Friday night between April 10, and May 15 this spring.

The stadium lights on those Fridays remained on for 20 minutes and 20 seconds to recognize the loss of the 2020 season.

Coach Riley’s comments for this article were made on May 15, the final night that the lights at the Eagles baseball field were turned on as Debbie sat by his side in the coach’s office in the baseball field press box.

Earlier in the evening a surprise retirement parade involving current and past players, co-workers, friends, and family was held on the street in front of Dave and Debbie’s house.

“The seniors are the ones I thought of first,” said coach Riley as he and Debbie sat in the press box amid a collection of old newspaper clippings, pictures, years of stat sheets, and the Eagles baseball team’s uniforms that fill the press box coach’s office.

“It’s painful to see what they’re going through. I understand it. It’s been painful for me too,” noted coach Riley.

“Sterling got to play football and basketball (this year). He didn’t get to play baseball. He was all-state in baseball last year,” noted coach Riley.

“Preston didn’t play anything else. Preston was a baseball guy. He was a good baseball player. We were looking for him to be one of our big leaders this year. It really hurts because baseball was his deal.”

Coach Riley summed it up by noting, “I hate it for the kids. I’m retiring, and all that. But I got to play my last year. These kids didn’t. These kids did nothing to deserve this.” It is nearly impossible to discuss coach Riley’s tenure with the Holden baseball team without mentioning long-time assistant coach Charlie Castle.

Coach Castle drew emotional and deliberate praise from coach Riley. “This would have been year 16,” said coach Riley with a sentimental tone while noting Castle’s extended, important presence on the team. 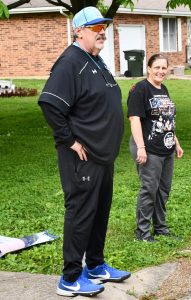 “Charlie has been one of the most important parts of our program. There have been times where he has been what’s grounded me. “Coach Castle has a way of approaching situations that makes you realize that all the work you put in, and everything that we’ve done, we’re prepared, and the kids are ready. He has done so much for the program. It’s almost like having a second head coach out there a lot of the time.”

Coach Riley complimented the long-time Holden assistant coach for Castle’s work with the JV and C teams, and his work in preparing the underclassmen for varsity play.

“I wish I had the number of wins that Charlie has as a JV coach because he’s had three or four, maybe five undefeated seasons.

And you’ve got to realize that the product he gets to put out there, he gets what I don’t take from him. He never bats an eye. Or sometimes he might come to me and say, ‘Hey, this kid’s been doing pretty good. You might want to think about him for varsity.'”

In short, coach Riley’s respect for coach Castle was simply stated, “I know some coaches who don’t put a lot of importance on what their assistant coaches say. I obviously do.

The big thing about Charlie is that we’ve become pretty close friends. And that’s probably the most important part to me.”

Taking into account all the players, coach Castle’s steadfast contributions, the wins and losses, the seamless support of his wife Debbie, and the support of his family, coach Riley reflected upon his baseball coaching career, his final season of coaching which will go into the books with a 0-0 record, and his future.

“With the way this year ended, I don’t know that I can see myself not coaching baseball again,” he said. “I don’t want to be a retired guy who doesn’t do anything, and has nothing to push him to stay involved. I’ve got my family. I’ve got an awesome family. They have supported me through everything, so a ton of my time is going to be spent with them.”

With his retirement papers signed, sealed, and delivered, coach Riley concluded, “I feel like I still have something to give to the baseball part of it, and I don’t know yet. That’s to be determined.”