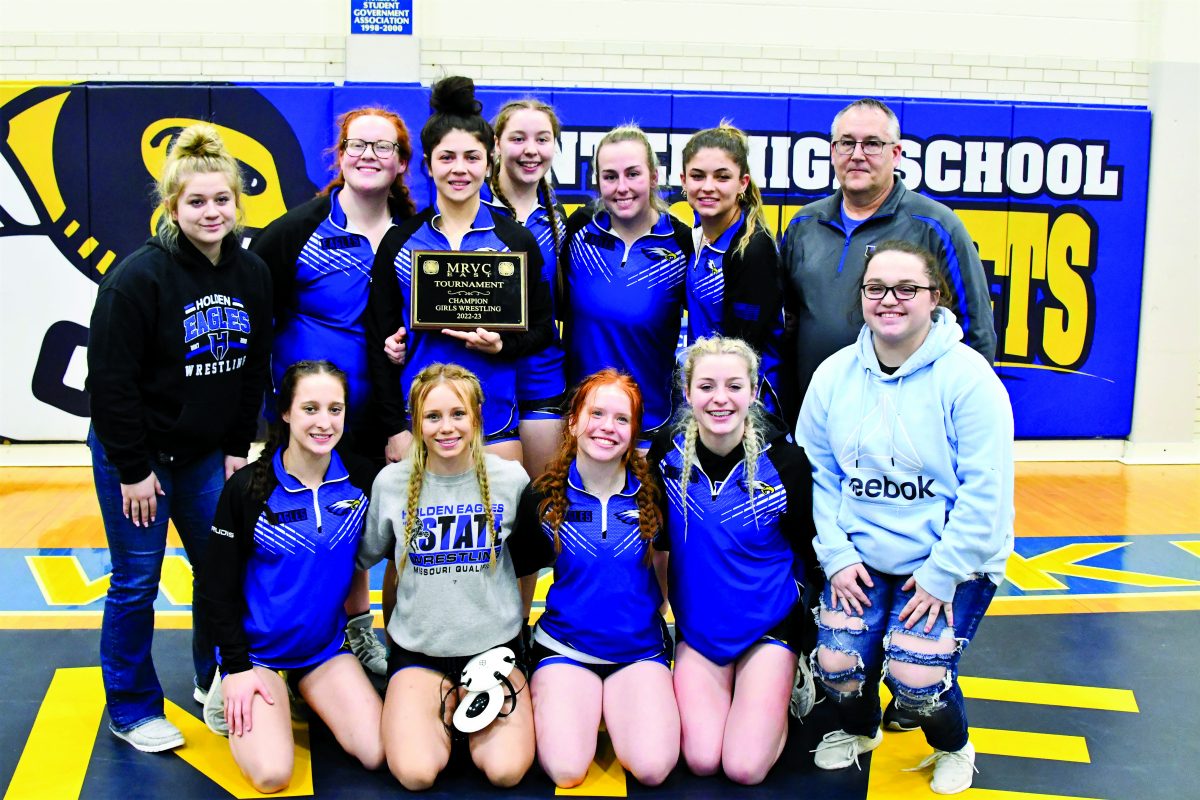 The team returned from the MRVC Girls Wrestling Tournament at Center High School with the MRVC-East championship trophy in hand.

“These girls are writing the Lady Eagle wrestling program record book every time they go out, and compete,” said Holden girls wrestling coach Ron Franklin. “They are a special group of girls that have developed with me, or have quickly adapted to the expectations. We are setting benchmarks and accomplishments every time we take the mat. The sheer statistics that these girls are amassing will rival anything that any wrestling team Holden has ever had, boys or girls.”

All nine Lady Eagle team members competing in the MRVC Tournament left with a top-four All-MRVC medal with freshman Haley Brooks, freshman Adasyn Yoder, and junior Alex VanHooser each earning individual titles in their weight classes.
Wrestling at 105 pounds, Brooks collected the team’s first individual title on Friday. In the first-place match, Brooks won by decision by the score of 8-2 over Higginsville wrestler Kyana Huseynov.

“Haley had to beat the same girl for the third time in a week, and a half,” noted coach Franklin.

Brooks ended the tournament with three wins versus no losses.

“My main goal was just to win my points, and just keep her down,” said Yoder. “I just wanted to prevail.”

“Adasyn did gut it out,” said the head coach. “That girl from Odessa beat her back in December at the Belton Tournament.”
VanHooser’s first-place finish occurred in the 235-pound weight class, and was secured with two wins by pin against her two opponents on Friday.

“Alex is officially on a streak, as we call it. That is three (first-place finishes) in a row,” noted coach Franklin of the junior’s recent tournament success.

Senior Aubree Castaneda finished the tournament with the second-place medal in the 190-pound weight class. A first-round bye put the senior in the semifinals where she recorded a win by pin.

In the first-place match, Castaneda fell by pin in the third period to familiar opponent Carmen Conner from Higginsville.
“Aubree was trying to beat a good girl for the third time, and just was not up to the task that day,” said coach Franklin.
Wrestling at 140 pounds, junior Charlie Gregg repeated as an All-MRVC medalist by placing second last Friday. Gregg placed third in the 130-pound weight class at last year’s MRVC Tournament.

After a first-round bye, Gregg recorded a win by pin in the semifinals. In the first-place match versus all-state wrestler Amitria McNack from Clinton, Gregg lost by technical fall to place second.

Freshman Macey Greene at 110 pounds recorded two early wins by pin to advance to the first-place match where she took a loss by pin in the second period to place second.

“I definitely had a pretty difficult bracket when it came to first place,” said Greene. “I mean, it is what it is. I’m proud of how the team ended up doing, and I think we did really good.”

“Macey and Charlie had really good girls in the finals, and they may be in their heads a little bit,” said coach Franklin.
Senior Jordan Sylvester placed third in the 170-pound weight class. In the third-place match, Sylvester recorded a win by fall over Higginsville wrestler Allee Morrison.

“Jordan actually had to beat the same girl twice in the same day, and was able to do it,” said coach Franklin. “It really proved that she earned her place in that tournament.”

Sylvester was pleased with her, and the team’s performances on the day as she collected the second All-MRVC medal of her career.

“I think today for me personally went pretty well, and overall as a team, I think it went pretty well, too,” said Sylvester. “Last year, I was still iffy, and it was all new. Now, I’m more focused. I’m more in the game in the sport. I’ve definitely progressed from last year a lot. I’m personally proud of myself for how I’m doing.”

Junior MaReya May placed fourth in the 125-pound weight class at the tournament. May rebounded from a first-round loss to record two wins before falling in the third-place match.

“MaReya was the only girl on the team who was not seeded, so she surpassed everyone’s expectations, except ours,” said coach Franklin.

Senior Tasia Lee recorded a fourth-place finish at this year’s MRVC Tournament in the 130-pound weight class. Lee went 2-2 on the day. A win over Odessa wrestler Ava Sanders in the consolation semifinals put Lee in the third-place match where she lost by pin.

“Tasia was able to stay in the top four in one of the toughest brackets in the conference,” said coach Franklin.

Lee earned the Holden Lady Eagle wrestling program’s first ever All-MRVC medal finish by placing second in the 142-pound weight class at the inaugural MRVC Girls Wrestling Tournament on January 29, 2020, at Harrisonville High School.
The MRVC Girls Wrestling Tournament was cancelled due to weather during Lee’s sophomore season, and Lee missed the MRVC Tournament during her junior season as she recovered from an offseason surgery.

“Today, the mind set was just to get better than my freshman year in conference,” said Lee after this year’s MRVC Tournament. “I came out with my first match, and I won. Then, my second one I lost, so I had to have the mind set of, ‘I can’t lose this next one, or I’m done.’ I ended up winning, and I got fourth. So I lost my last match.”

As a freshman, Lee wrestled as the lone Lady Eagle high school wrestler. The team grew to five wrestlers during her sophomore season, and increased to eight team members last year.

“It’s amazing how the sport grows,” said Lee. “We have so many girls coming out, and wrestling. It’s the beauty of the sport. The team grew, and I’m truly honored to be a part of this family, this group. We have amazing freshmen coming out. It’s amazing.”