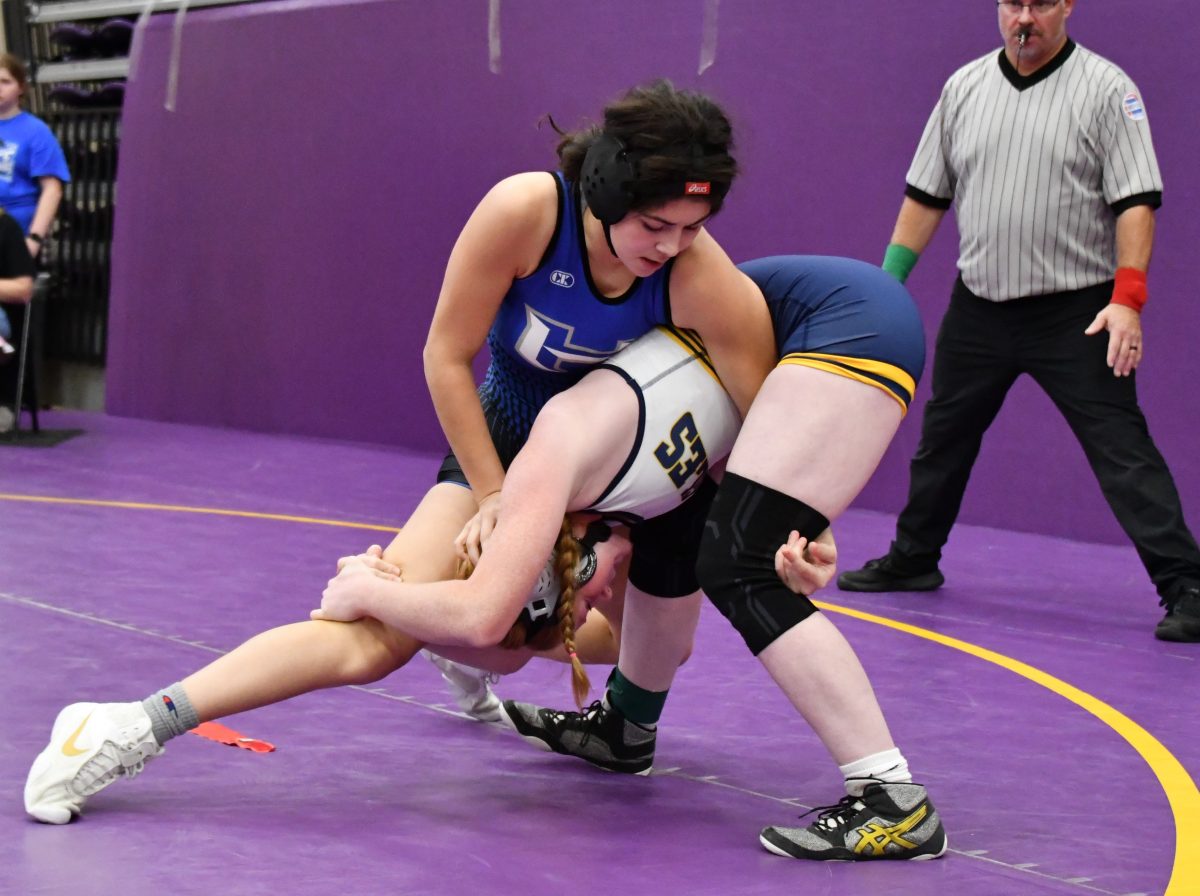 Medal Match… Lady Eagle senior wrestler Tasia Lee (top) controls her Liberty North opponent during the third-place match at the Belton Tournament on Saturday, Dec. 10. Lee finished the match with a win by pin to collect the third-place medal in the 135-pound weight class. Photo by Steve Edwards

Five of the six Holden team members secured top-six medals as seniors Aubree Castaneda in a second-place finish, and Tasia Lee in a third-place finish led the team.

“The girls wrestled well at Belton,” said Holden girls wrestling coach Ron Franklin as the Lady Eagle squad competed in the absence of Haley Brooks, Jessica Felder, Jordan Sylvester, and Charlie Gregg. “Eighth in a tournament of 24 is pretty good for six girls.”

After recording four wins in pool matches in the 190-pound weight class, Castaneda took a pool match loss by pin on Saturday. In bracket matches, Castaneda recorded a win by pin in the quarterfinals, and a win by decision in the semifinals to move into the first-place mach.

In the first-place match, Castaneda and Fort Osage wrestler Taylor Hillbrand forced two overtime periods with Hillbrand taking the win by a 3-2 decision in ultimate tiebreaker.

“That match was definitely a harder match for me personally,” said Castaneda. “It wasn’t the hardest match I’ve ever been in, but it was definitely messing with my head a little bit because I could not get my advances that I wanted on her…she couldn’t get hers on me, so it was basically just a pushing match between two 190 pounders.”

Coach Franklin applauded Castaneda’s finish as she competed in a first-place match for the second weekend in a row. The week before, Castaneda placed first at the Marceline Tournament.

“Aubree is on the verge of realizing that she is good,” stated coach Franklin. “She has been in two back-to-back finals, and really only made two major mistakes over the entire season. She is beginning to find her identity, and learning how to win.”
Two wins by pin in pool matches, and a win by pin in quarterfinal bracket action by Lee at 135 pounds were followed by a loss by decision in the semifinals to put her in the third-place match.

“I won my pool matches, so I was seeded in a good spot,” said Lee. “I won my first one from my actual bracket, and then my second one, I lost to this girl just by two points. I just couldn’t get her down to get those two extra points.”

In the third-place match, Lee recorded a win by pin over Liberty North wrestler Alexis Rusley.

“She was real heavy on the head, and just not really doing anything…just circling,” described Lee. “I should have taken my shot whenever I could. I had my shot whenever I needed it, but it just didn’t play out. I just got a different takedown, and I got the pin.”

“Macey was 6-1 in the tournament,” noted coach Franklin. “She lost a match at the wrong time. When it all played out, she won the backside of the bracket. In reality, she has a head to head win over the girl from Belton who won the tournament. She beat (Kaitlyn) Dubois at Versailles.”

Junior MaReya May placed fifth in the 125-pound weight class.

Three-year team member Castaneda noted the effort as the Lady Eagle squad in the Belton Tournament.

“Even being short, we still put that work in, and most of us took medals,” said Castaneda.

Four-year team member Lee who wrestled as the lone Lady Eagle her freshman season, and has seen the team grow to 10 team members this year, described the tournament and the team’s overall effort three weeks into the season.

“I think they did really good,” said Lee. “I think they’re just coming out as a real good, positive group. We’ve added on. I’m super proud of them.”

Lady Eagles Defeat Lady Marksmen
With three head-to-head matches in a dual with Sherwood on Thursday, Dec. 8, the Lady Eagles wrestling team won two of the three match-ups in a 48-6 home-opening victory.

“It was a dual we could not lose because we had more girls than they did,” said coach Franklin.

For Holden, Adasyn Yoder at 120 pounds, and Aubree Castaneda at 190 pounds both won by pin as Lady Eagle 125-pounder MaReya May fell by pin.

“Adasyn and Aubree handled their girls with ease,” said coach Franklin. “MaReya wrestled their most experienced girl, and gave her a good match, although she lost.”

The Lady Eagles wrestling team competes next at the Lady Mustangs Christmas Class at Eldon High School on Friday, Dec. 16, and Saturday, Dec. 17.