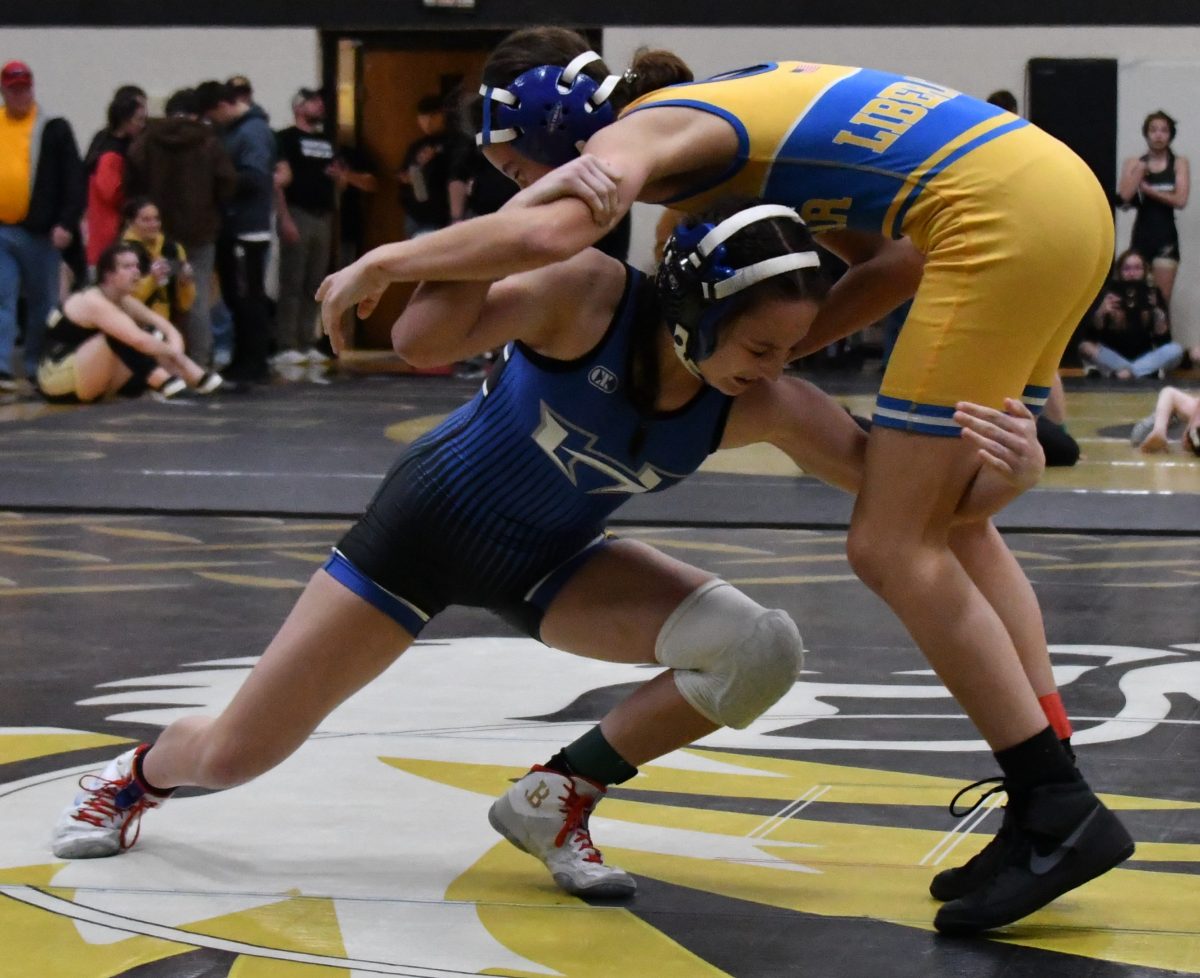 Textbook Shot… Lady Eagle freshman wrestler Haley Brooks takes a shot against her Bolivar opponent in the championship semifinal round of the 110-pound bracket at the Versailles Tournament on Tuesday, Nov. 22. Brooks won the semifinal match, and went on to win the first-place match by pinning Lebanon wrestler Brooklyn Butler. Photo by Steve Edwards

The Holden girls wrestling team kicked off the season by placing fifth among 23 teams at the Versailles Girls Tournament on Tuesday, Nov. 22.

Lady Eagle freshman Haley Brooks led the team by collecting the first-place medal in the 110-pound weight class as freshmen Macey Greene at 115 pounds, and Adasyn Yoder at 120 pounds also earned top-four medal placings. “As a group, we wrestled really well,” said Holden girls wrestling head coach Ron Franklin. “We did not make a lot of costly mistakes. We did not dwell on losses. We bounced back, and moved onto the next match.”

Brooks romped to her first-place finish by recording four wins by pin. In the first-place match, Brooks pinned Lebanon wrestler Brooklyn Butler. “Haley wrestled like she owned everyone in the gym with confidence, and sheer dominance,” said coach Franklin. After recording a win by fall in the quarterfinals, Greene fell in the championship semifinals to move into the third-place match where she took a win by decision. “Macey had a tough match in the semifinals that she lost to a very good girl from Lebanon,” said coach Franklin. “She is the only girl on our team who wrestled just Class 2 girls all day, and she beat two of them.” Two wins by fall in early competition were followed by two losses by fall for Yoder as she finished in fourth place. “Addie wrestled well,” said coach Franklin.

Freshman Jessica Felder finished in 10th-place in the 155-pound bracket with two wins, and two losses on the day. “The freshmen all wrestled like they belonged in a varsity lineup,” said coach Franklin. “All these girls have goals to place, and win tournaments. They all wrestled like they can meet those goals. Jessica was the biggest surprise of the class, and responded to an early loss with some wins on the backside.”

Junior wrestler MaReya May at 125 pounds, and senior Jordan Sylvester at 170 pounds each placed fifth. Both wrestlers rebounded from quarterfinal round losses to record two wins. “May did what May does best. She went out, and got two good head and arms which resulted in two falls,” said coach Franklin.

Senior Tasia Lee won by pin in the seventh-place match in the 135-pound weight class after dropping her two early matches.

Senior Aubree Castaneda at 190 pounds worked back from a first-round loss to record three straight wins for a ninth-place finish in a crowded bracket.

First-year senior wrestler Lilly Guinn placed 12th in the heavyweight bracket. She suffered three losses while gaining her first tournament experience. “Tasia stepped up, and ended the tournament with a win which is what we always strive for…win the last match of the tournament, and maximize your position,” said coach Franklin. “The girl who showed the most individual improvement may be Jordan. She overcame situations in all her matches that last year would have been match-enders. Her fifth-place finish is a huge step in the right direction for her. “Aubree by far and away had the worst draw of the day when she drew the Tipton girl in the first round, and the loss sent her to the backside,” continued coach Franklin. “She didn’t pout or mope, she just turned the page, and won the backside. Lilly was experiencing her first matches of her life, and has to chalk them up to experience. “We finished fifth as a team with nine girls competing,” summarized coach Franklin. “A top-five finish for the first time out is pretty good. The team finish was actually really good when you look at it from the fact that two of the teams that finished ahead of us were Class 2 girls teams, coupled with the fact that we were short at least two scorers (Charlie Gregg and Alex VanHooser).”

The Lady Eagles host their first home match on Thursday, Dec. 8 when Sherwood come to Holden. Start time is 5 p.m.