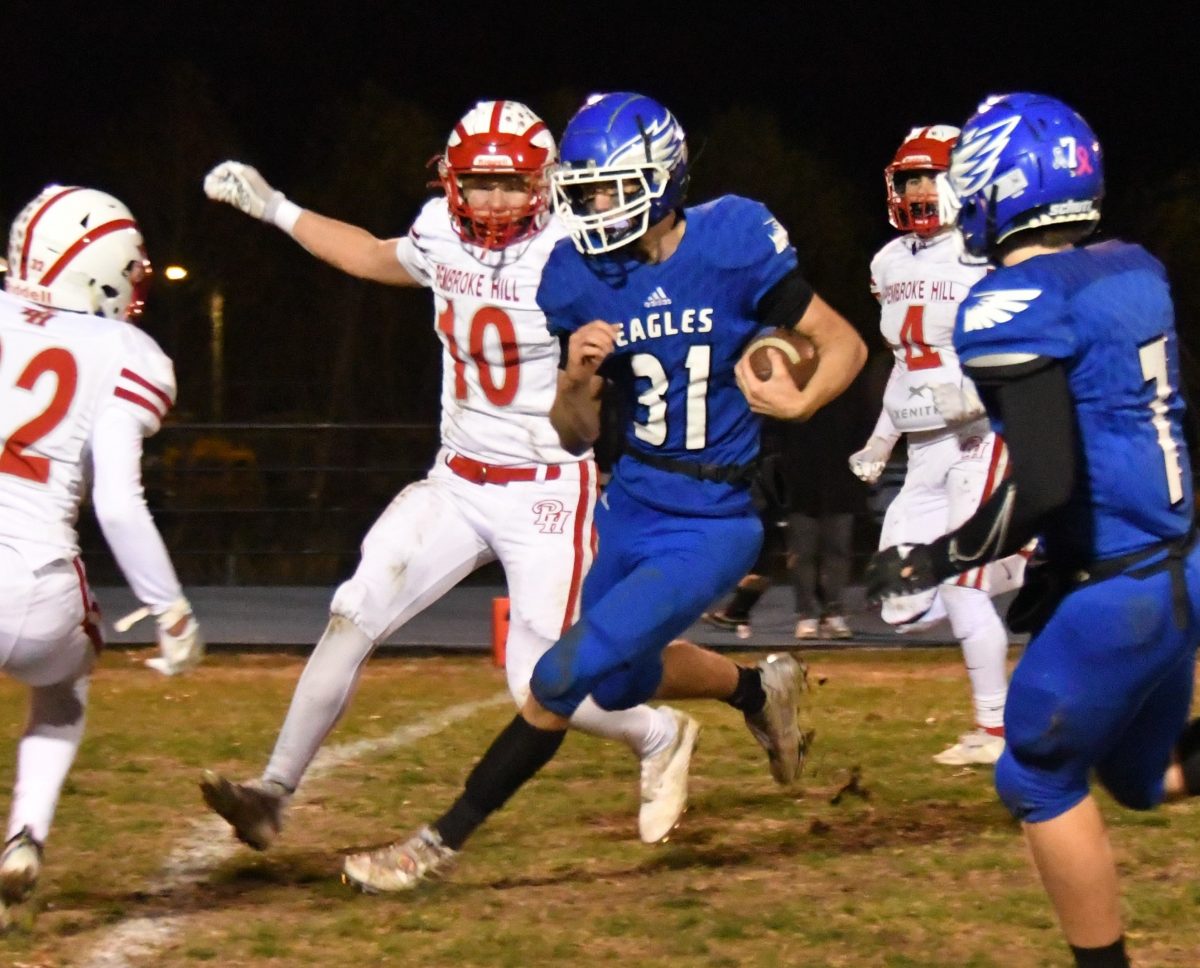 Burst To The End Zone… Eagle ball carrier CJ Reifsteck (31) avoids tacklers on a 51-yard touchdown run during the fourth quarter of Holden’s home Class 2, District 6 championship game against Pembroke Hill on Friday, November 11. Reifsteck’s touchdown set the final score at 32-25 as the Eagles defeated the Raiders to clinch the district title. Photo by Steve Edwards

The Holden football team captured the Class 2, District 6 Tournament championship trophy by defeating the visiting Pembroke Hill Raiders by the final score of 32-25 on Friday, Nov. 11.

In a back-and-forth contest which the Raiders led at halftime, Holden closed out the trophy win on a 51-yard touchdown run by Eagle receiver CJ Reifsteck, and an interception by senior Bryce Faust in the final minutes.

“Our kids came out, and really executed so well early,” said Holden coach David Diener. “Pembroke, they have won five of their last six games. Even though they started off a little bit slow, they came out, and they were confident, they made good blocks, they shut down our D line better than about anybody else has all year…they played hard. Our kids were able to just come out, and make the extra play at the end of the game, to get big interceptions, to ice things, to get first downs late to seal things. It was just good for our kids to be able to get this reward, and make the plays to make the difference.”

On Holden’s second possession of the game, the Eagles put the first points on the scoreboard on a carry by Jayden Davis-Hacker. Reifsteck carried for the two-point conversion to give Holden an 8-0 lead near the end of the first quarter.

Pembroke would intercept a Holden pass with over half of the second quarter clock expired. The Raiders failed to turn the turnover into points as the Holden defense held Pembroke to a punt.

Following a short punt by Holden, Pembroke scored on an 18-yard touchdown pass to cut Holden’s lead to 14-12 after the failed two-point conversion.

The Raiders converted a fumble recovery into points late in the quarter. With 35 seconds remaining in the first half, the visitors held an 18-12 lead following Pembroke’s third failed PAT of the half.

“All of a sudden, we’re down going into halftime, and really there weren’t a lot of adjustments on offense, we just needed more snaps,” said coach Diener. “We were moving the ball when we wanted to. We’ve just got to make sure we’re clean with the football.”

Eagle senior Garrett Smith gave the lead back to Holden on an interception that he returned to the end zone for a touchdown early in the third quarter. A botched two-point conversion left the score at 20-18 early in the second half.

“It was huge as far as momentum,” said coach Diener in regard to Smith’s pick six. “We came out…we wanted to make sure we got the momentum, and got the ball back. Defense comes out, and gets a score of their own.”

The Raiders would respond with a touchdown run later in the third quarter. The extra-point kick gave Pembroke its final points of the game with the score at 25-20.

The Eagles closed out the third quarter on an extended drive that flowed into the fourth quarter. The drive ended on a 26-yard touchdown catch by Smith from quarterback Aiden Morarity with 25 seconds expired off of the fourth quarter clock. Holden held a one-point lead at 26-25 after the PAT failed.

Reifsteck closed out scoring in the game on a 51-yard carry.

“CJ’s run at the end to get us that big one score full lead was a big deal,” said coach Diener. “That type of play either hits big, or it doesn’t. That’s actually the play he fumbled on earlier in the game. To give him that shot to be able to bounce back, and come back in that situation was a big deal for him. He’s made so many big plays for us all year, so to be able to get him that…for him to be able to redeem himself that way was absolutely outstanding.”

Pembroke turned the ball over to Holden on an incomplete pass on fourth down after Reifsteck’s score.

The Raiders held onto one last gasp of hope after intercepting a Holden pass with under three minutes to play.

Faust shut down Pembroke’s chance at mounting a late drive by intercepting a Raiders pass with 2:13 remaining on the clock.

“I am extremely proud of the way Bryce has continued to grow at being a great corner for us,” said coach Diener. “Since the Richmond game, he has had four interceptions, and led our defense in pass break-ups. I knew he was going to bounce back, and make big plays for us down the stretch. For him to have the breakout last half of the year has been outstanding.”

Holden was able to run the game clock out to end the game as the Eagles collected the football program’s first district title trophy since the 2017 season. With the win, Holden moves into the quarterfinal round of the Class 2 state playoffs.

“It means a lot,” said coach Diener of the district trophy victory in his second season guiding the Eagles. “Our kids have put in so much work in the offseason. For us to go, and get this reward after one offseason, it’s going to be a huge momentum swing to keep moving this program forward. We’re going to go next week up against a good Lamar team. We’re one of the eight. You win that, and you’re one of the four. That’s a reality, and without winning the district title, you don’t get that shot to play on Saturday afternoons. That’s what we’re ready for.”

Faust finished the game with 6 tackles, 1 interception, and 3 pass break-ups.

On offense, Reifsteck totaled 54 yards, and 1 touchdown on 3 carries.

Other tackle total leaders included Davis-Hacker and Josh Taylor with 9 each, Americo Mabrey and Tucker Kauffman with 8 each, Tyler Hankins with 6, and Jacob Andes with 5. Smith had 4 tackles, and 1 interception. Aiden Christian and Andrew Johnston each had 3 tackles. Chipping in 1 tackle apiece were Dom Sizemore, Wally Walker, Wes Brown, Lane Siemer, and Justin Brown.

Smith totaled 70 yards, and 1 touchdown reception on 3 catches. Siemer had 2 catches for 24 total yards. Kasyn Tevis had 1 catch for 5 yards.