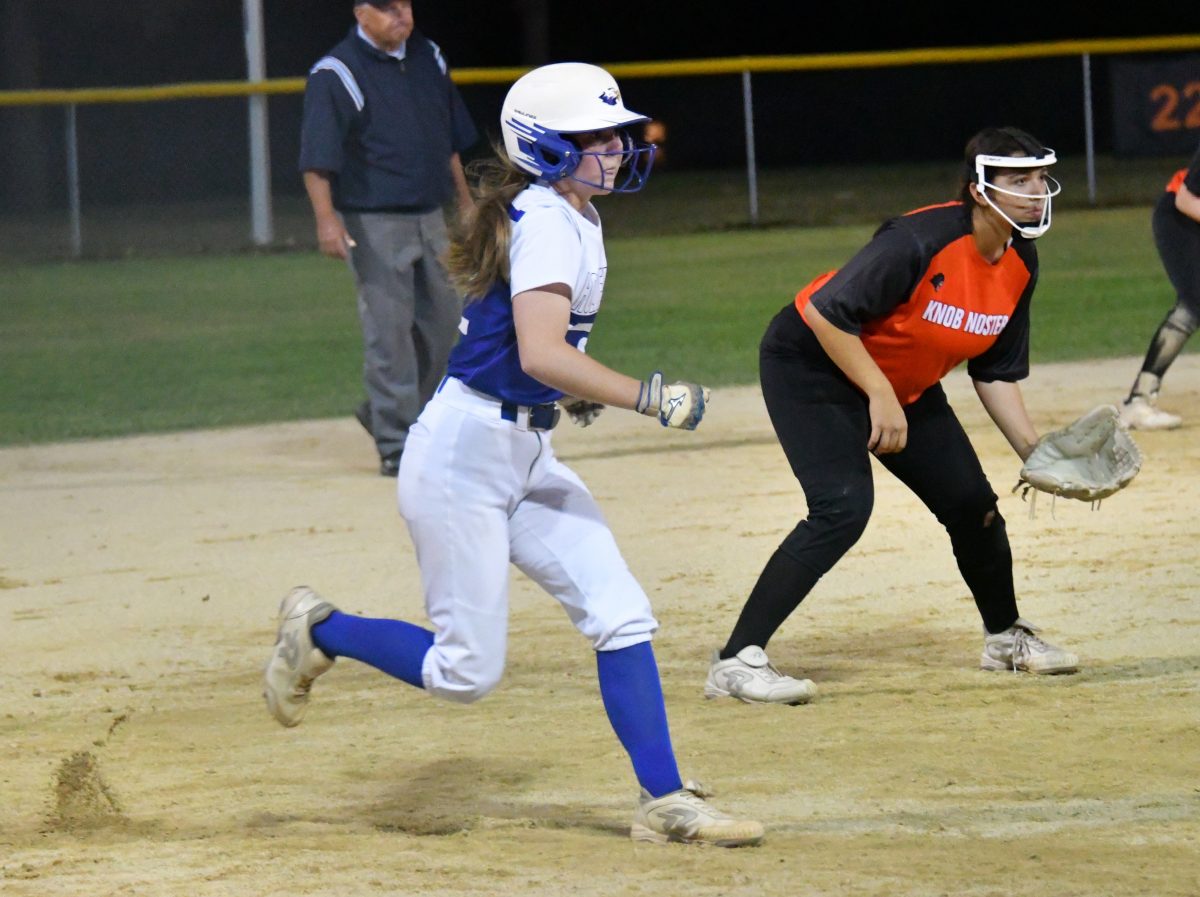 Senior Softball Spark… Lady Eagle senior Maddie Sechrest leads off from third base after hitting an RBI triple that scored teammate Macey Greene in the fourth inning of Holden’s district quarterfinal game against Knob Noster. Sechrest’s RBI was the first of eight runs scored by the Lady Eagles in the inning to give Holden the lead in the game after trailing through three innings. Holden went on to defeat Knob Noster by the final score of 13-9.  Photo by Steve Edwards

After finding themselves in a 5-0 hole early in their Class 3, District 7 quarterfinal game against Knob Noster on Tuesday, Oct. 11, the Lady Eagles worked back to win the game by the final score of 13-9.

The Lady Panthers plated a single run in the first inning, and scored four in the top of the second inning to gain the early advantage.

“We came out, and gave them quite a few runs there,” said Holden softball head coach Jeff Smith. “Granted, I’ll give it to Knob. They came out swinging, and they did the little things right that we weren’t doing in the first three innings of the game. We fought, and clawed our way back into it. Our bats finally came alive, and did what they needed to do to take that win.”

Holden plated a run in the bottom of the second on a sacrifice fly by senior relief pitcher Maddie Sechrest who in the top of the second inning moved from second base to take over on the mound for starter Abby Sisk.

The Lady Eagles added another run in the third on a ground ball by first baseman Lilee Keller that scored shortstop Kimmie Spring.

The scale tipped in Holden’s favor in the bottom of the fourth inning.

Sisk, who stayed in the game at third base was hit by a pitch to start the fourth.

“That sparked us,” said coach Smith of Sechrest’s triple. “There were a lot of people getting down on themselves. They picked back up there about the fourth, fifth inning, and we came to life.”

Lilly Bay, Sechrest’s replacement at second base, drew a walk, and was followed by Marah Klover, who drove Sechrest in on a ground ball.

A sacrifice fly ball by Kameryn Rehfeldt advanced Brown to third base, and Keller to second base.

Sisk singled to score Brown and Keller for Holden’s seventh and eighth runs of the inning.

As the lineup batted around, Sechrest was hit by a pitch, and Bay drew a walk before the final two outs of the inning were recorded.

“Maddie definitely had a big game,” said coach Smith. “Pitching, she only gave up six hits in 5.2 innings. Her triple in the fourth was a big momentum shift. I have never seen Maddie as fired up as she was after that hit! It started a rally with hits from Kimmie, Camille, Lilee, and Abby to give us a 10-8 lead. We also had a hit from Lilee in the third for the second run.”
Spring provided a verbal spark on the field as she urged the team during the rough start to the game on from her shortstop position.

“Kimmie is a competitor, especially in big games,” said coach Smith. “She is like having another coach on the field, and is a great motivator. That motivation brought on a triple in that eight run fourth inning from Kimmie. Her presence and leadership on the field is like no other player that I have coached. She will be extremely missed during those big games when we need the motivation in the future.” 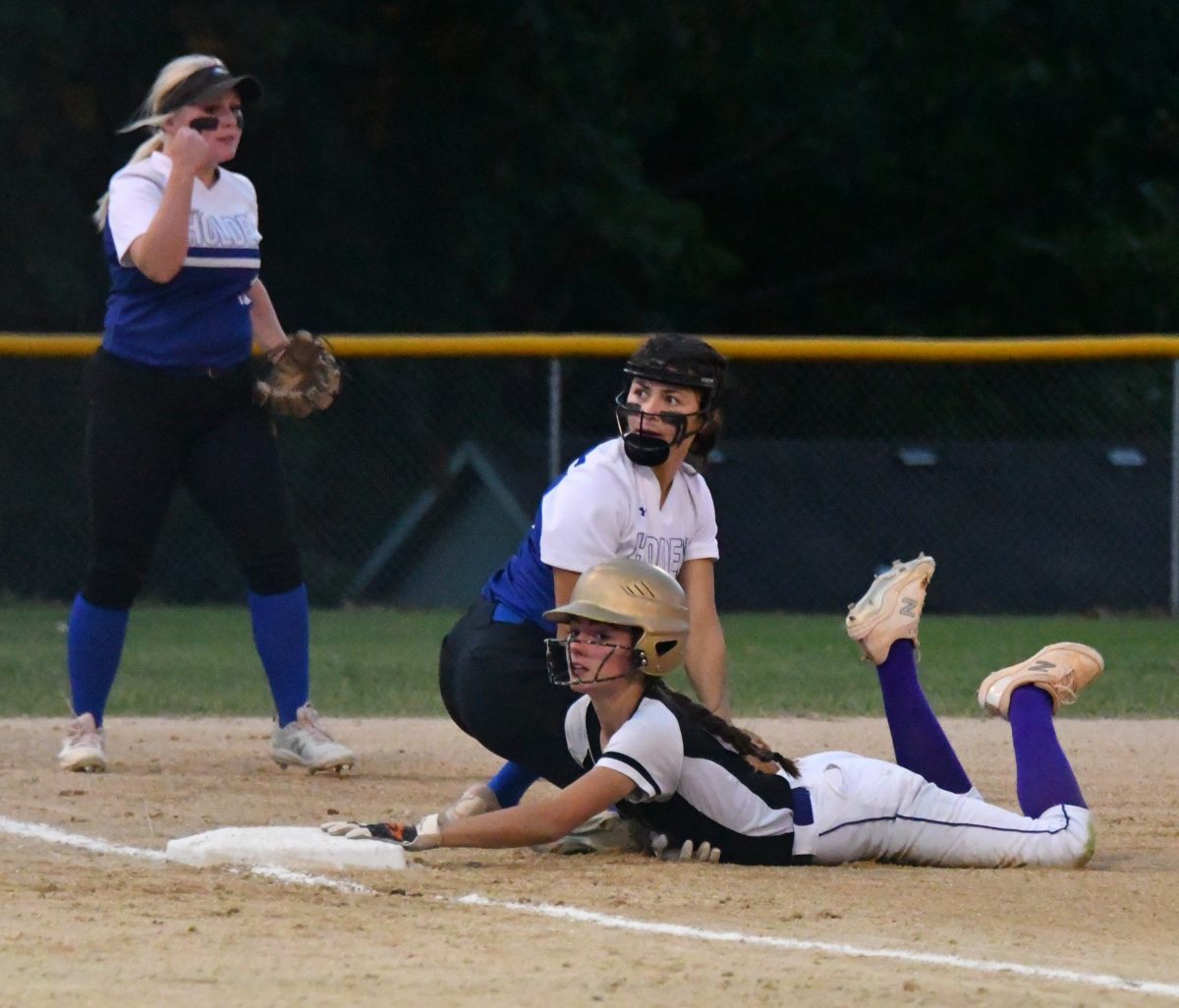 Cornered Chick… Lady Eagle third baseman Tasia Lee and Chick base runner Mack Montgomery look to the official for the call after Lee tagged Montgomery out in the first inning of Holden’s district semifinal game against Pleasant Hill. Lady Eagle shortstop Kimmie Spring assists with the call in the background. Photo by Steve Edwards

The Holden softball team worked to an early 2-0 lead before falling by the final score of 4-3 to Pleasant Hill in the semifinals of the Class 3, District 7 Tournament.

Pleasant Hill found a run that would stand for the final run of the game as Chicks pitcher Brooke held the Lady Eagles to two hits in the game.

“When we put the ball in play, I’ll give it to them, they made the plays that were hit to them,” said coach Smith. “They put pressure on us, and we put pressure on them. We put pressure on them those first three innings, and had a couple chances. All in all, we played about as clean of a game defensively as I could have asked for. Lilee (Keller) and Jazzy (Brown), two underclassmen come in there, and pitched really, really well.

“We’re a bang-bang call at the plate from it being a tie game there in the seventh, and having a little different outlook there,” added coach Smith in regard to a highlight reel throw on an assist from center fielder Marah Klover to Abby Sisk at third base for a tag on a Chicks base runner. “It was one of the most unbelievable throws I’ve ever seen by an outfielder from Marah. That kept us in the game. It kept us in that one-run game.”

Sisk’s tag, and a tag by third baseman Tasia Lee for an out at third base drew notice from coach Smith as the third base position proved to be a hard spot to fill through the season after the graduation of all-state third baseman Liz Stout who previously filled the role.

“That was good defense from the last few games there,” said Smith of Sisk and Lee’s overall performance at third base in the district tournament. “Defensively, we did everything sound, and just the way you want to play. They came out and just outplayed us, outhit us a little bit. Sometimes that’s just the way it goes. It’s situational, and we didn’t get enough runners on base. We definitely had the best offense in this district, but when it comes down to it, they had a great pitcher. Sometimes that’s the way it goes in softball which is kind of unfortunate. You’ve got the complete better team, but that one player. Sometimes that’s how this game goes.”

The senior starters drew praise from the head coach as they played in their final game, and ended the season with an overall record of 21-10.

“I can’t say enough about that senior class this year,” said coach Smith. “They are one of a kind. They are a special, special, special group. Being here three years, having all those girls be starters for all three years that I’ve been here, and really be the leaders on the team…I came in when they were sophomores, and those girls were basically our leaders. They have been for the last four years. They’ve been great. They’re going to be very, very difficult to replace.”

Lilee Keller started on the mound for Holden. In 3 innings, Keller allowed 3 runs (3ER), 5 hits, and 2 walks while recording 2 strikeouts.