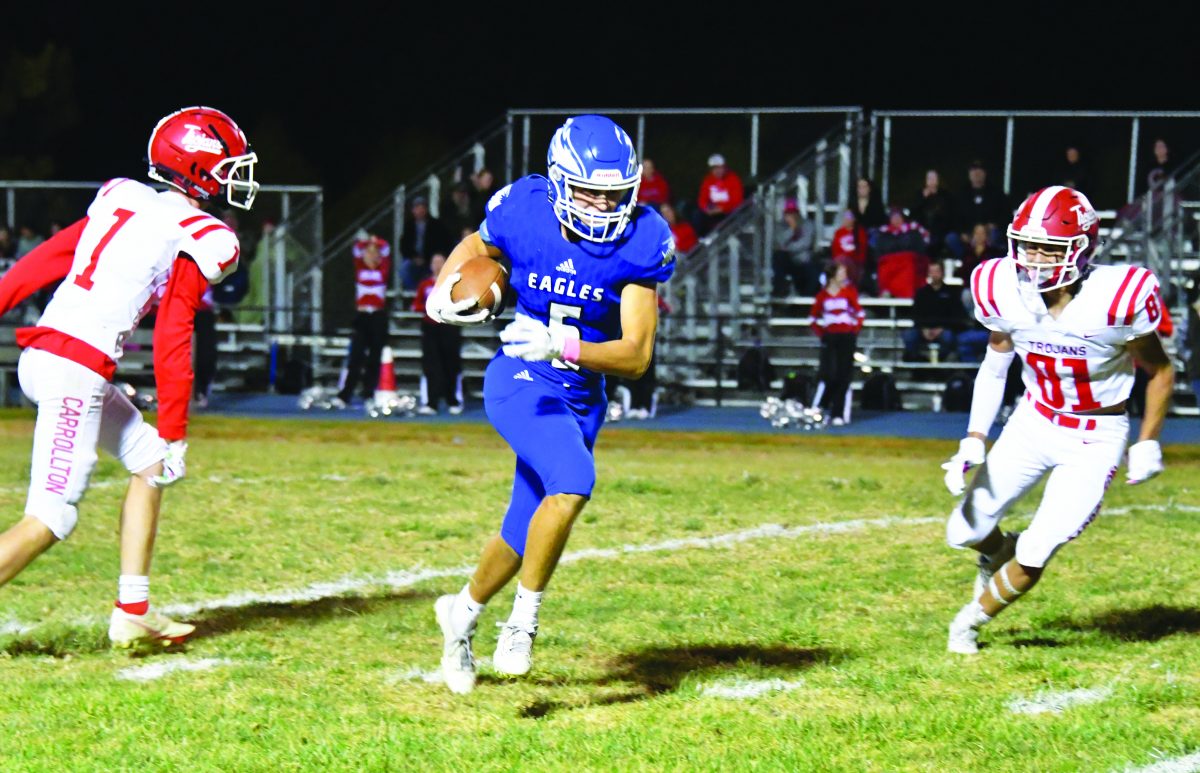 Senior Pick Six… Eagle senior defensive back Josh Taylor gets his hands on a Trojan pass for an interception, and returns it for a touchdown during the second quarter of Holden’s Senior Night game against Carrollton on Friday, Oct. 14. Holden shut out Carrollton in a 52-0 Senior Night victory for the Eagles. Photos by Steve Edwards

The Eagles football team defeated visiting Carrollton by the final score of 52-0 in Holden’s Senior Night game on Friday, Oct. 14.

A defensive performance highlighted by two interceptions by Eagle senior defensive back Bryce Faust, and another interception by senior Josh Taylor that was returned for a touchdown set the defensive tone.

After a scoreless first quarter, the Holden offense put up its highest points total of the season in a game by scoring 20 second quarter points, and 32 second half points.

“They did a really good job with their game plan of switching up their fronts, and it forced us to be honest up front,” said Holden football head coach David Diener. “Once we got comfortable with where they were at, then particularly at the start of the third quarter after our adjustments, we made blocks that we were counting on, and the ball moved where it was supposed to.”

Holden’s first score of the game came on the first play of the second quarter on a quarterback sneak by junior Aiden Morarity. Junior kicker Lane Inglis added the extra point for a 7-0 lead.

Junior running back Reco Jenkins added a rushing touchdown just past the midway point of the second quarter. Inglis was successful on his PAT for Holden to go up 14-0.

Taylor put an exclamation point on the second period by intercepting a Carrollton pass, and returning it 29 yards for a touchdown with five minutes to go in the half. Taylor’s tote put Holden ahead 20-0.

Taylor, Faust, and senior Tyler Hankins drew notice from coach Diener for their play in the defensive backfield. Faust and Hankins have adjusted to the position after having played linebacker in past seasons. 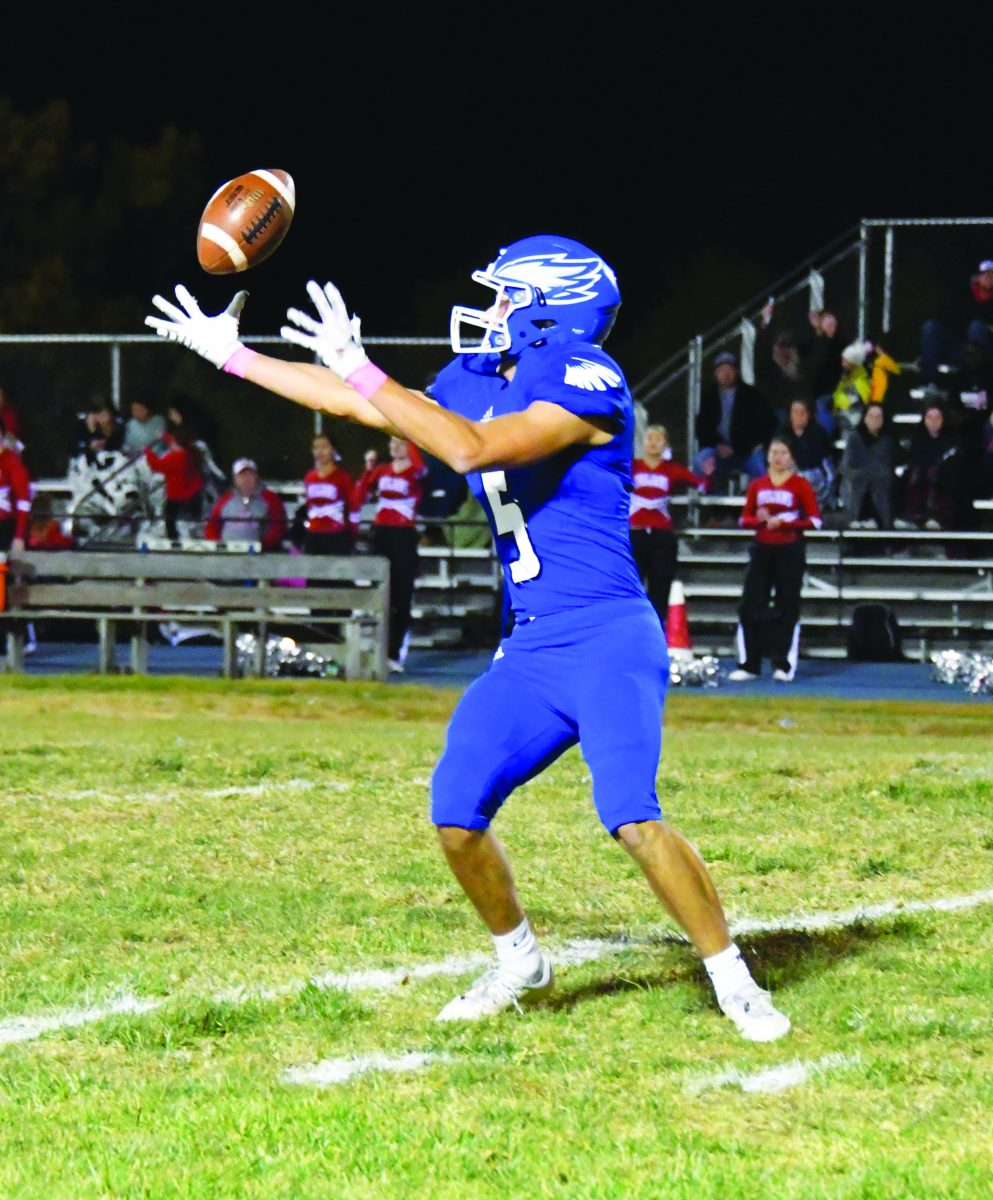 Senior Pick Six… Eagle senior defensive back Josh Taylor gets his hands on a Trojan pass for an interception, and returns it for a touchdown during the second quarter of Holden’s Senior Night game against Carrollton on Friday, Oct. 14. Holden shut out Carrollton in a 52-0 Senior Night victory for the Eagles. Photos by Steve Edwards

“I am so appreciative of particularly guys like Bryce and Tyler who haven’t played those spots before, and being isolated,” said coach Diener. “People don’t praise you when the coverage is tight, but as soon as one play lapses, everybody knows it was you. That’s a high-stakes pressure situation, moving from a spot where they were both linebackers last year. To come in, and step up where we needed them this entire year is absolutely such a team-first move by them. They have absolutely learned those spots, and played them well throughout the year. We are very confident in their ability moving forward here, as their confidence has grown throughout the year.”

Freshman Justin Brown cracked the end zone on a carry for Holden’s first score in the second half. Inglis added the kick for a 27-0 lead.

The Eagles capitalized on Faust’s pick with junior Jayden Davis-Hacker carrying for a score, and a 33-0 lead.

Senior Wally Walker scampered into the end zone for a touchdown on Holden’s next possession. Inglis added the extra point.

As Holden racked up touchdowns, senior foreign exchange kicker Benjamin Schorbach pounded multiple touchbacks on the kickoffs following the scores. At the same time, Holden’s defense kept the Trojans out of the end zone.

“It’s such and advantage to do that, to force a team to go 80 yards is really hard,” said coach Diener of Schorbach’s kicks. “We are absolutely proud of his progress throughout the year.

“Our D line stepped up huge again,” continued coach Diener. “Americo (Mabrey) was a little bit banged up, so we had Jacob Andes come in, and step up for him. Aiden Christian continues to play really well at our other end spot. Andrew Johnston, and Dom Sizemore played well. Sizemore had his most productive game.”

Jenkins found his second rushing touchdown of the game late in the third quarter to put Holden ahead 46-0.

Sophomore running back Sam Comer carried for a touchdown to set the final score at 52-0.

“I am extremely proud, and thankful for what they have done,” said coach Diener who is in his second season as the head coach of the Holden football team. “This program wouldn’t be where we’re at right now without their buy-in immediately.

They were leaders as juniors. For them to be able to continue, and come out here and experience success here as seniors…and not only experience success, but experience ‘expected’ success, that is not an easy thing to do. It’s tough to have pressure knowing that you should win games, and going out and winning them. They’ve absolutely stepped up, and I’m very grateful for all their effort and work they’ve given me for these two years.”

On defense, junior CJ Reifsteck led in tackles with 9 total. Sizemore and Kauffman each totaled 8 tackles. Sizemore had a team-high 5 tackles for loss. Davis-Hacker had 7 tackles; Smith, Christian, and Johnston each totaled 6, Andes had 5, and Matt Reynolds totaled 4 tackles.

Taylor had 3 total tackles to go with his interception. Faust had 2 solo tackles, and 2 interceptions. Hankins totaled 2 tackles. Sophomore Kale Tryon also had 1 interception in the game.

With the win over Carrollton, the Holden football team moves to 5-3 on the season, and 2-2 in MRVC-East play.

This Friday, Oct. 24, the Holden football team plays on the road against conference foe Knob Noster at 7 p.m.