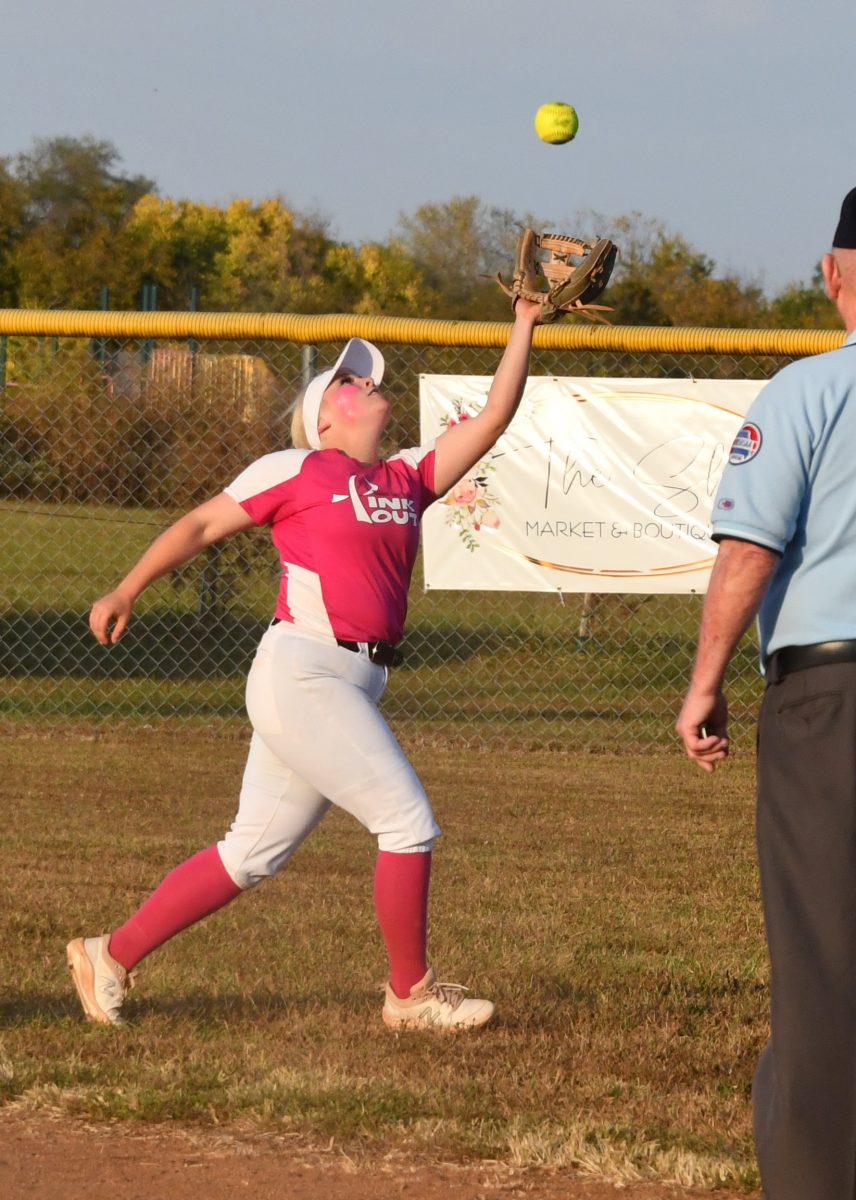 The Holden softball team finished the conference season with a share of the Missouri River Valley Conference-East Championship after falling at home to Carrollton by the final score of 3-0 on Thursday, Oct. 6.

The Lady Trojans put up a single run in second, fifth, and seventh innings each as Carrollton starting pitcher Jenna Edwards held Holden to three hits in the game. Two of Carrollton’s runs were unearned, resulting from fielding errors by the Lady Eagles.

“She’s solid,” said coach Smith of Edwards. “She’s good. We got three hits. We’re better than that. We put up seven (runs) on them the first time we played them. We took a time through the lineup to get comfortable, and by that time, it was about to late.

“We were never out of the whole time,” emphasized coach Smith. “You’ve got to give them props. They didn’t make any mistakes defensively, and we made some mistakes defensively. I think they only had one earned run. It’s only the second time we’ve been zeroed all year. For a team that’s put up almost 300 runs on the season, those zeros hurt. You can’t win any games that way. You learn from it.”

Lady Eagle starting pitcher Jazzy Brown limited Carrollton to 5 hits, 5 walks, and 1 earned run while striking out 7 batters.
At the plate for Holden, Millie Davidson, Faith Brown, and Abby Sisk each had 1 hit.

Versus Richmond
The Holden Lady Eagles softball team captured its ninth straight conference win of the season with a 5-1 victory over Richmond on Tuesday, Oct. 4.

After taking a 2-0 lead in the top of the first inning, and limiting Richmond to one run in the second inning, the Lady Eagles opened up for three runs in the seventh to secure the MRVC-East victory.

“It was a 2-1 ballgame through the seventh inning, and then we kind of broke it open there at the end,” said coach Smith. “They did a pretty good job of mixing up their pitchers. They kept us off balance early, and got our confidence down a little bit. Then, we finally gained it there in the last inning, and took care of business.”

Sechrest aided her cause on the mound by recording 2 RBIs on a double in the seventh inning.

Faith Brown and Lilee Keller each totaled 2 hits, and 1 RBI. Abby Sisk had 1 hit, and 1 RBI. Millie Davidson and Kameryn Rehfeldt each had 1 hit.

Versus Oak Grove
The Holden softball team defeated Oak Grove by the final score of 10-5 on Monday, Oct. 3.

“We came out firing on all cylinders, and swung the bats really well early,” said coach Smith. “We put them down. Their heads dropped, and we just kept putting it on them.”

Marah Klover had 2 hits (1HR, 1DB). Klover’s home run was good for 3 RBIs. Millie Davidson had 2 hits, and 2 RBIs. Kameryn Rehfeldt and Faith Brown each had 1 RBI on 1 hit. Abby Sisk had 2 hits. Kimmie Spring had 1 hit. Maddie Sechrest contributed 2 RBIs – one on a sacrifice fly, and one on a walk in the sixth inning.

At the end of last week, the Holden softball team held an overall record of 19-9, and concluded MRVC-East play with a 9-1 record to finish as conference co-champions.

The Holden softball team began play in the Class 3, District 7 Softball Tournament on Tuesday of this week. Holden (2-seed) played Knob Noster (7) in the quarterfinals of the tournament to be held at Oak Grove High School. Game results were not available at press time. With a win in the quarterfinals, Holden would play in the semifinals on Wednesday, Oct. 12 at 6:30 p.m. against the winner of the Pleasant Hill versus Notre Dame de Sion quarterfinal game. The Class 3, District Championship game is scheduled for Thursday, Oct. 13 at 5 p.m. at Oak Grove HS.