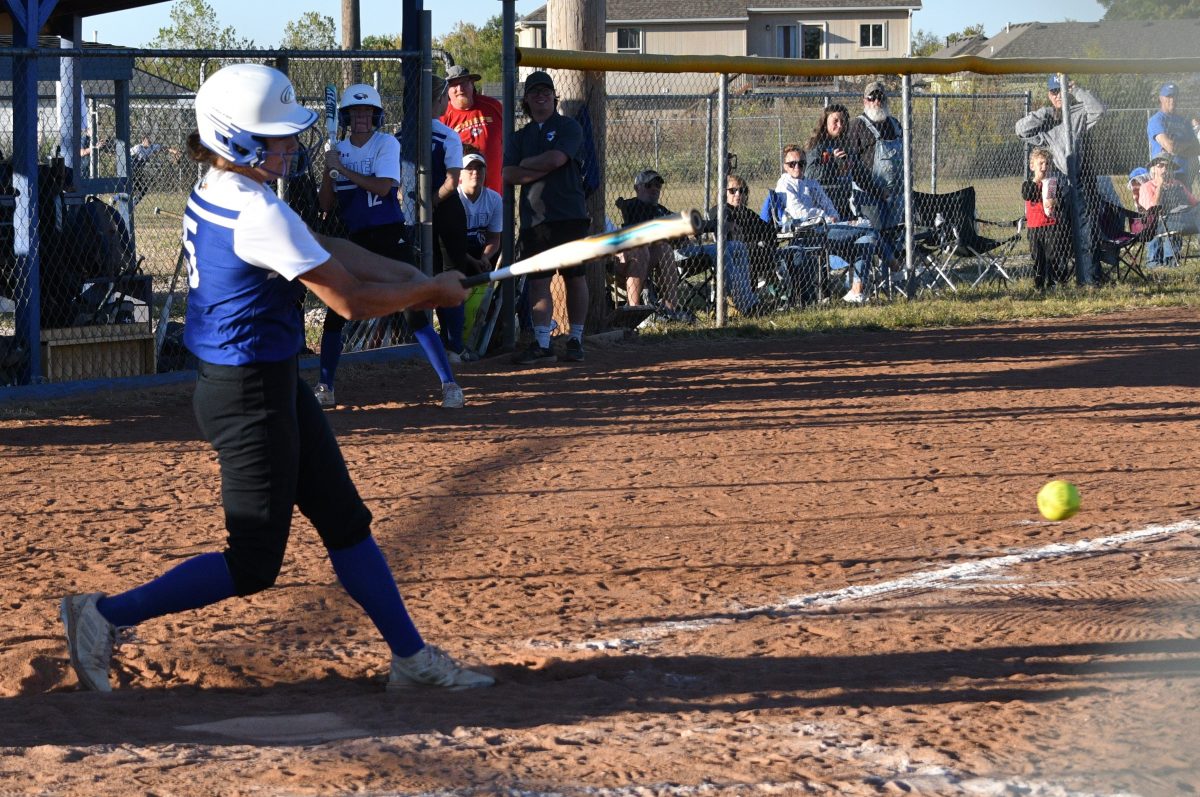 Lady Eagle seniors Alli Iles, Millie Davidson, Riley Naumann, Marah Klover, Tasia Lee, Gabby Gard, Kameryn Rehfeldt, Kimmie Spring, and Maddie Sechrest were recognized on the field after the run-rule shortened game in which they all started.
“All nine of them played the whole game,” said Holden softball head coach Jeff Smith. “That says something. There are some girls who haven’t got a whole lot of varsity time on the senior side of things, then to go in there…a lot of them with less than 10 varsity at-bats, then go in and score 16 runs in four innings.”

Senior leadoff hitter, and regular center field starter Marah Klover drew a walk to start the bottom of the first inning for Holden.

Playing in her second game of the season after sitting out with an injury, senior third baseman Tasia Lee was hit by a pitch to put two runners on.

“She got knee problems there right before the Greater Kansas City Tournament, and she’s been out,” noted coach Smith in regard to Lee. “She came out today and yesterday she got some innings in, and looked really, really good. If she can get back into the flow of things, she may find herself on the field quite a bit here in the next couple weeks.”

Holden plated two runs in the second inning, and two in the third as Higginsville scored one run in the top of the second.

The Lady Eagles ended the game by plating nine runs in the bottom of the fourth which put the 15-run rule after three innings into effect. With Davidson, Rehfeldt, and Sechrest on base, Iles hit a double to plate Davidson and Rehfeldt for the final runs of the game.

“Since I got here, you knew that class was something special whenever you’ve got that much talent,” said coach Smith. “Up the middle of the field you’ve got Camille and Maddie, and Kimmie and Marah. I mean every one of them means so much to the program to have for the last three or four years. To lose them after this year it’s going to hurt. It’s going to hurt not only for just talent-wise, but for leadership.

“You couldn’t ask for much of a better leader as far as vocal leader, and another coach on the field than Kimmie. Marah’s pretty quiet, but she’s still is just by skill level a leader. And the same thing with Camille, and the same way with Maddie, too. All those girls…Kameryn as a leader when she’s not playing in the field, she’s a leader in the dugout, and when she’s batting. They’re going to be extremely hard to replace next year.”

In the start on the mound, Sechrest worked 4 innings. Sechrest allowed 1 unearned run, 4 hits, and 1 walk while recording 4 strikeouts.

Versus Lexington
The Holden softball team won a run-rule shortened contest over the visiting Lexington Minutewomen by the final score of 18-1 on Wednesday, September 28.

The 15-run rule after three innings was put into effect in the bottom of the third inning when Lady Eagle senior Alli Iles singled to score senior teammates Tasia Lee and Gabby Gard, and freshman Haley Brooks.

“We did what we needed to do,” said Holden softball head coach Jeff Smith. “Everything looked good in that game, and we were able to get some girls in who hadn’t got to play a whole lot of varsity this year. Olivia Wooster, a freshman came in, and pitched a really good game in that one. She looked really good.”

Addilyn Wooster started the bottom of the third inning with a ground ball single. Two batters later, Lee singled on a ground ball to put two runners on.

Gard doubled to score Wooster. Brooks drew a walk before Iles ended the game with her single.

Iles and Gard led the Lady Eagles with 2 hits, and 3 RBIs apiece. Brooks, Kimmie Spring, Marah Klover, and Faith Brown each had 1 hit, and 2 RBIs. Lilee Keller had 2 hits. Lee, A. Wooster, and Kameryn Rehfeldt each had 1 hit.

In three innings on the mound, O. Wooster allowed 1 earned run, and 4 hits while recording 4 strikeouts.

Versus Leeton
Playing at home, the Lady Eagles softball team defeated Leeton by the final score of 5-1 on Tuesday, Sept. 27.

“They played us pretty tough,” said coach Smith. “We did good enough to win, and played good defense.”

Kameryn Rehfeldt led at the plate for Holden with 2 hits, and 2 RBIs. Lilee Keller had 1 hit, and 1 RBI. Sechrest and Millie Davidson each chipped in 1 hit.

Versus Sherwood
The Holden softball team fell at home to Sherwood by the final score of 8-3 on Monday, Sept. 26.

The Lady Marksmen worked to an 8-1 lead after four innings of play before Holden scored two runs in the fifth, and left the bases loaded in the bottom of the sixth.

“Finally, in the fifth inning, we started to play our game,” said coach Smith. “It was basically two games all in one there. Half of it we played pretty bad, and the other half, we played good enough to win. You’ve got to play all seven to win it.”

Abby Sisk had 3 hits in the game. Kimmie Spring and Maddie Sechrest each had 2 hits. Kameryn Rehfeldt and Marah Klover each had 1 hit, and 1 RBI. Millie Davidson had 1 RBI. With 1 hit each were Faith Brown and Lilee Keller.

Abby Sisk started on the mound for Holden with Jazzy Brown pitching in relief. Each pitcher recorded 5 strikeouts during their time on the hill.

At the end of last week, the Lady Eagles softball team held an overall record of 17-8, and stood at 8-0 in MRVC-East play.

The Lady Eagles softball team closes out MRVC-East play at home this Thursday, October 6, in a match-up against Carrollton.

The varsity game on Thursday starts at 5 p.m., and is followed by a JV game.