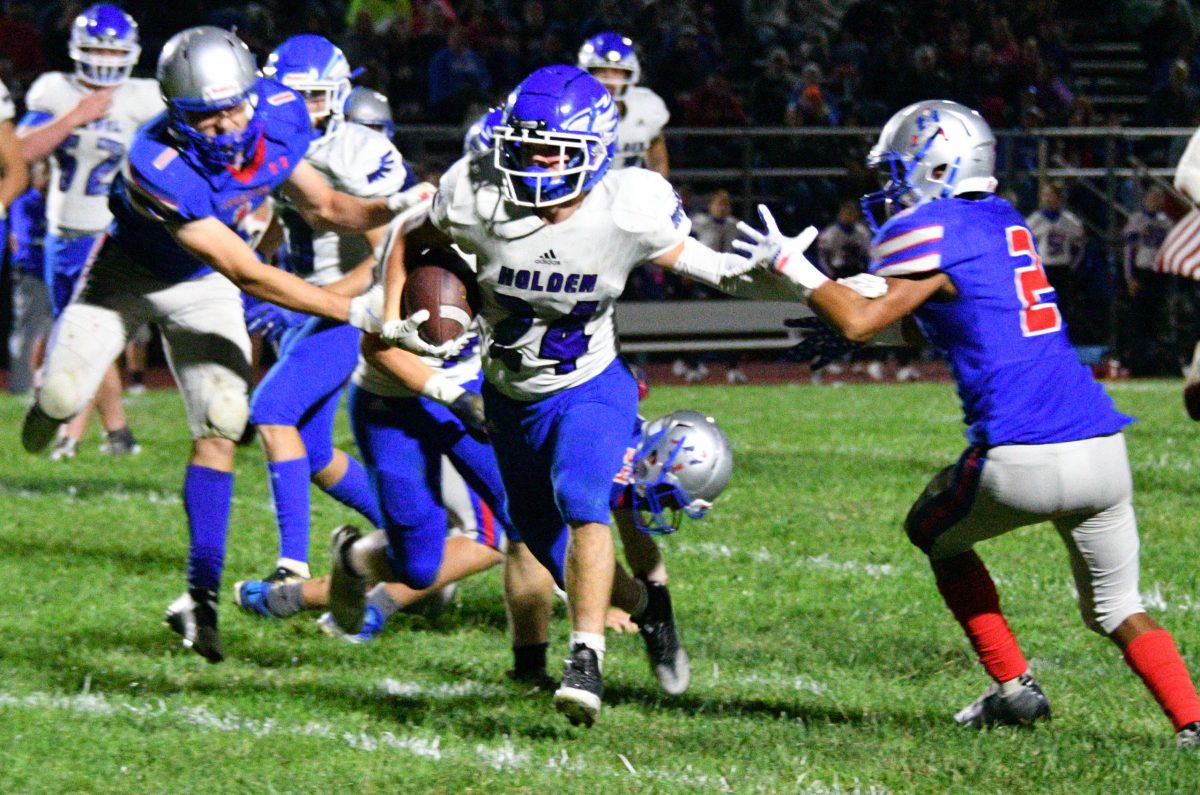 End Zone Dash… Eagle running back Jayden Davis-Hacker breaks through Minutemen tacklers for a 27-yard touchdown run in the third quarter of Holden’s road game at Lexington on Friday, September 23. Davis-Hacker scored three rushing touchdowns in the game as Holden defeated Lexington by the final score of 46-14 to put the Eagles at 1-0 in conference play. Photo by Steve Edwards

The Holden football team opened MRVC-East play by collecting a road win in Lexington’s Homecoming game by the final score of 46-14 on Friday, September 23.
A fast start for the Eagles led to 26 first-half points in the victory as the Minutemen mustered 14 points late in the contest with the Eagles firmly in control of the game.
“We really liked our match-ups this week,” said Holden football head coach David Diener. “We felt that their strong suit was trying to run the ball, and we really like our defensive line in those types of situations. Offensively, it was another opportunity for us to be physical, and keep getting better up front.”
A 40-yard pass from Eagle quarterback Aiden Morarity to tight end Garrett Smith set up Holden’s first score of the game.
Americo Mabrey capped the opening drive by crossing the goal line on a carry for an early 6-0 lead for the Eagles.
“The first play we were able to have a big chunk play,” said coach Diener. “It got the momentum immediately on our side, which is what we were wanting.”
Jayden Davis-Hacker added to Holden’s lead by carrying for a four-yard touchdown run near the end of the first quarter. Mabrey scored the two-point conversion to put Holden ahead 14-0.
Davis-Hacker tacked on another rushing touchdown in the second quarter on a seven-yard run.
Eagle receiver Lane Siemer put Holden’s final points of the first half on the scoreboard on a 30-yard touchdown reception.
Meanwhile, the Holden defense kept the Minutemen out of the end zone.
“Our defensive line played really great,” noted coach Diener. “We had a little bit different type of scheme, trying take away their good receiver (Dariyan Reaves) on the edge, and Josh Taylor had a great night covering him. Our game plan was to shut him down, and to shut down the run. We were able to pull off that defensively.”
On Holden’s first possession of the second half, Davis-Hacker found the end zone on a 27-yard dash through Lexington’s defenders. The touchdown tote upped the Holden lead to 32-0 with 8:45 remaining in the third quarter.
Eagle running back Reco Jenkins added a touchdown on a one-yard carry in the third quarter.
The Minutemen cracked the scoreboard on the kickoff following Jenkins’s score when Reaves broke for a 99-yard touchdown return. The two-point conversion failed.
Holden’s final points of the game were delivered on a 44-yard touchdown reception by Smith with 3:44 remaining on the clock. Davis-Hacker carried for a successful two-point conversion.
Lexington scored late on a quarterback keep by Peyton Hopkins. Hopkins carried for the two-point conversion to set the final score at 46-14 in the game which was controlled by Holden on both sides of the ball.
“CJ Reifsteck continues to play great,” noted coach Diener. “He’s really kind of hidden in our mix of things, both offensively, and defensively, but he continues each week to perform well. This was probably his best game defensively, coming up and supporting run, and then being good in coverage. Tucker Kauffman continues to play great. Aiden Christian had his probably most productive game so far on the D line, and we were really needing his production. We can draw it up however we want defensively. Our kids have to step up and play the responsibilities, and they’re doing that right now,” continued coach Diener.
“Offensively, Andrew Johnston continues to get better each week. He’s a junior who is first year starting…he has turned into a varsity player these last 10 quarters when we started moving the ball, and it’s because of from the second half of Clinton how much his game has stepped up.”
Davis-Hacker finished the game with 3 touchdowns, and 75 yards on 10 carries. Jenkins had 1 touchdown, and 80 yards on 11 carries. Mabrey totaled 1 touchdown, and 8 yards on 2 carries.
Smith had 1 touchdown, and 84 yards on 2 receptions. Siemer had 1 touchdown, and 30 yards on 1 catch. Reifsteck had 1 catch for 16 yards, and carried the ball 2 times for 10 yards.
Morarity finshed the game with 4 completions, 2 touchdown passes, and 130 yards.
Kauffman led the defense with 11 tackles. Reifsteck and Dom Sizemore each had 7 total tackles. Reifsteck’s included 2 tackles for loss. Christian (3TFL, 2 sacks) and Mabrey (4TFL) each totaled 6 tackles. Siemer totaled 5 tackles. Smith, Bryce Faust, Jacob Andes, Seth Wright, Kale Tryon, and Trent Stout each totaled 3 tackles. Tyler Hankins totaled 2 tackles.
After last week’s win over Lexington, the Holden football team held an overall record of 4-1, and stood at 1-0 in MRVC-East play.
The Holden football team hosts Higginsville in a conference game this Friday, September 30. Game time is 7 p.m.
Posted in Sports