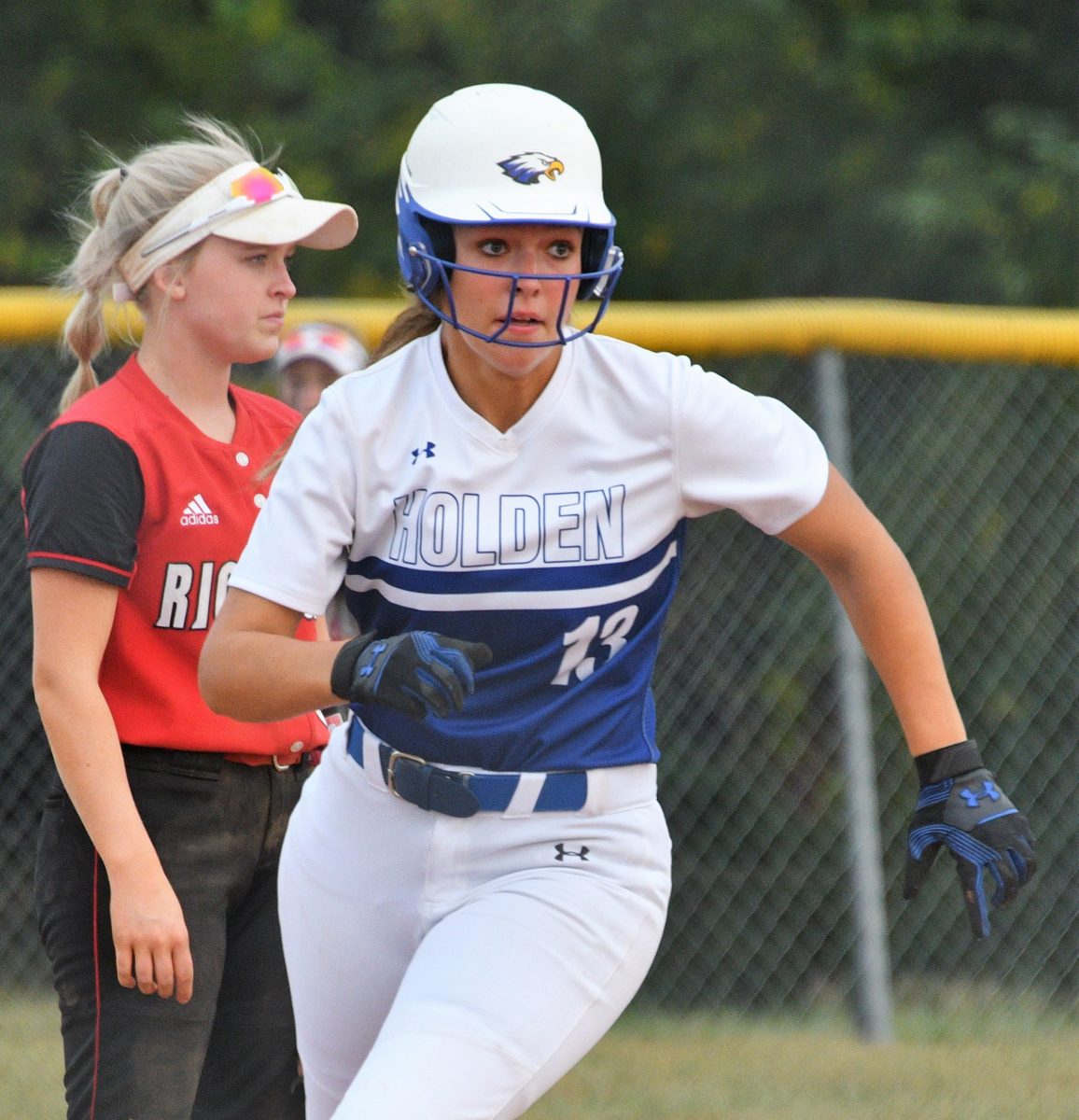 Running Past Richmond… Lady Eagle senior softball player Kameryn Rehfeldt rounds second base after hitting a single in the fourth inning of Holden’s home game against Richmond on Thursday, September 15. Rehfeldt hit a two-run home run in the first inning, ending the game with two hits, and five RBIs as the Lady Eagles defeated the Lady Spartans by the final score of 14-5. Photo by Steve Edwards

The Holden softball team grabbed its fourth conference win by defeating visiting Richmond by the final score of 14-5 on Thursday, Sept. 15.

Sixteen total Lady Eagle hits backed up a solid starting performance from sophomore pitcher Lilee Keller to keep Richmond in check as Holden moved to 4-0 in MRVC-East play. “It was good that we came out immediately right off the bat in the first inning, put it on them, put them down early,” said Holden softball head coach Jeff Smith.

Rehfeldt’s was a two-run shot. Sisk’s solo shot was Holden’s fifth run of the opening stanza.

The Lady Eagles added four runs in the second inning, and three in the fourth as Keller held Richmond scoreless through the first two innings.

Keller was relieved by freshman Jazzy Brown to start the sixth inning.

The defense behind Brown helped shut down a Lady Spartan threat in the top of the sixth inning with runners on second and third base with no outs.

A pop up to second baseman Maddie Sechrest, and a line shot to Kimmie Spring represented the first two outs of the inning.

A fly ball to center fielder Marah Klover was caught for the third out with two stranded runners. “Lilee did a really good job in the game,” said coach Smith. “The top of their lineup is tough, and we knew that going in. She did a pretty good job limiting the amount of runs from the top of that lineup.

Then we got Jazzy coming in. She settled down, and got three big outs with runners on second and third.” In the bottom of the sixth inning, a ground ball by Faith Brown scored Spring.

A fielder’s choice on a ground ball by Rehfeldt plated Millie Davidson for Holden’s final run of the game.

J. Brown coaxed three ground outs from Richmond in the top of the seventh to end the game. “Kameryn had one heck of a game at the plate,” said coach Smith. “One through nine really hit the ball well.” Keller pitched through 5 innings in the start, recording 7 strikeouts with no walks. J. Brown pitched for the final 2 innings, allowing no runs, and no hits. At the plate, F. Brown totaled 3 hits, and 4 RBIs. Davidson had 3 hits, and 2 RBIs. Rehfeldt had 2 hits, and 5 RBIs. Keller had 2 hits, and 1 RBI. Sisk had 1 hit, and 1 RBI. Marah Klover and Lilly Bay each had 1 hit.

The Holden softball team defeated conference opponent Higginsville by the score of 23-3 on Tuesday, Sept. 13.

Holden as a team totaled 12 hits in the game.

After trailing 2-1 at the end of the first inning, a three-run home run by Lady Eagle second baseman Maddie Sechrest scored Kameryn Rehfeldt and Abby Sisk ahead of her to give Holden the lead for good.

The one run in the first inning for Holden was delivered on a first-pitch home run by leadoff hitter Marah Klover.

Catcher Millie Davidson plated teammates Lilly Bay and Kimmie Spring on a single in the second to give the Lady Eagles five total in the inning, and six total on the scoreboard early in the contest. “The bats were hot,” said Holden softball head coach Jeff Smith. “We had the two-run deficit there in the bottom of first, and just came right back. We came back, and got it within one in the first. Then, the bats just came alive from that point and time against a good team.”

Following Nevada’s two runs scored in the first inning, freshman starting pitcher Jazzy Brown held the Lady Tigers scoreless through the remainder of her time on the mound in the game. “Jazzy pitched a great game against a pretty good offense, and commanded the zone,” highlighted coach Smith.

“That was probably the best game I’ve seen her throw all year. She did a great job. She limited the number of walks, and really commanded the corner.

I was happy with her for that.” Brown totaled 5 strikeouts in 5 innings on the mound while allowing 2 walks, and 2 runs on 2 hits.

Sechrest had the 3-run home run for 1 hit, and totaled 4 RBIs.

Sisk totaled 2 hits. Bay and Faith Brown each chipped in 1 hit. At the end of last week, the Holden softball team held an overall record of 8-6.

This Friday, Sept. 23, and Saturday, Sept. 24, the Holden softball team plays in the UCM Tournament.

Bracket are scheduled for Saturday with opponents and times to be determined.