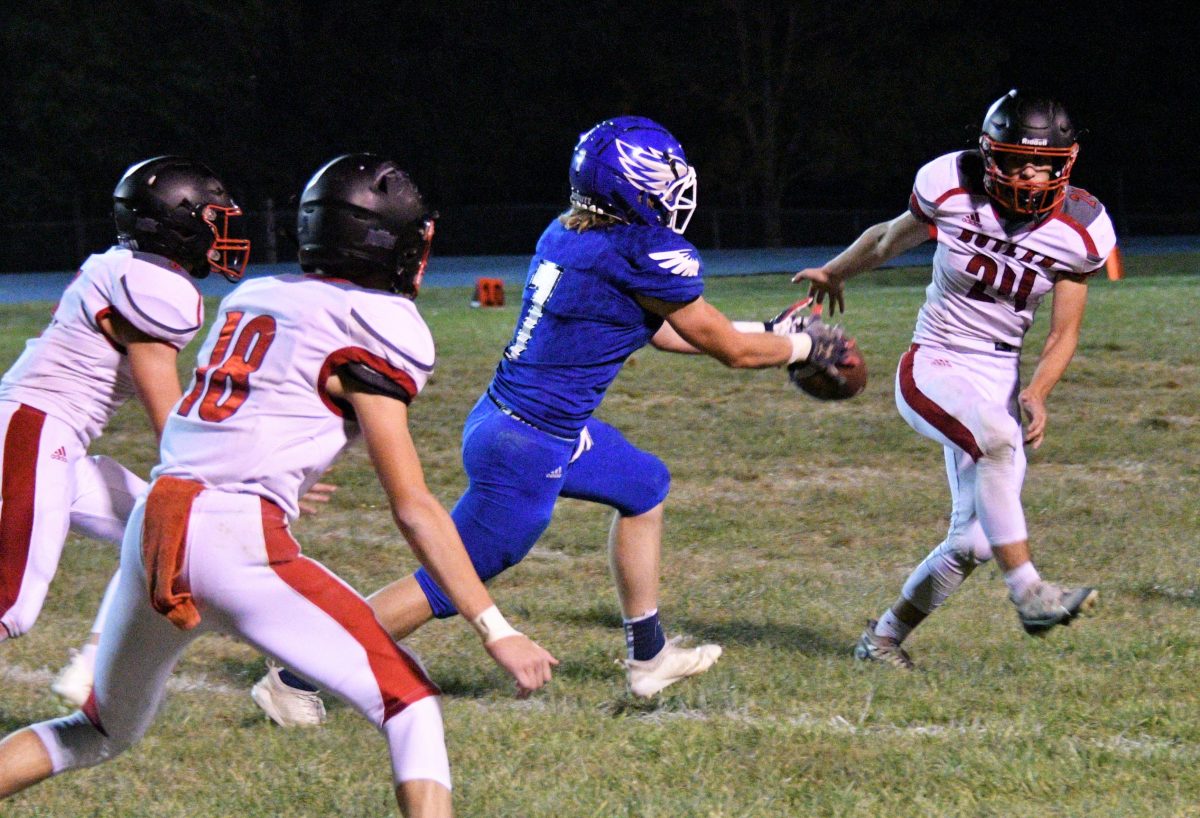 Tough Catch… Eagle receiver Lane Siemer makes a fingertip grab in traffic during the second half of Holden’s Homecoming win by the final score of 30-22 over Butler on Friday, September 16. Photo by Steve Edwards

The Holden Eagles football team recorded a Homecoming victory over the visiting Bears of Butler by the final score of 30-22 on Friday, Sept. 16.

Highlights were provided on both sides of the ball by Holden in the game with the Eagles emerging with the victory over Butler, the No. 7 ranked Class 1 team in the state. “We went hit-for-hit, play-for-play, and at the end, we made just enough plays,” said Holden football head coach David Diener. “I’m so proud of our kids for hanging in there, seeing the next opportunity, and going to make a play. We did it on both sides of the ball. What this shows is we can go in there, and go hit for hit with everybody.”

After receiving the opening kickoff, Holden marched down inside the Bears’ 20-yard line using a drive that included a long catch and run from tight end Garrett Smith, and two chain-moving quarterback sneaks from Aiden Morarity.

On a fourth-down play, running back Reco Jenkins took a handoff from Morarity, then lofted a touchdown pass to Smith for the first points of the game, and an early 6-0 lead. “That was the opening script,” described coach Diener. “Every play that we ran, we planned. The only play that we hadn’t scripted was Reco’s throw. We were able to make that connection, and Reco put a good ball on him.”

On Butler’s ensuing drive, the Bears mirrored Holden with their own halfback pass for a touchdown.

Butler converted the two-point play for an 8-6 lead with eight seconds remaining in the first quarter.

Butler added to its lead on a touchdown run with under seven minutes to play in the half.

A failed two-point conversion left the score at 14-6. An interception by Eagle senior defensive back Josh Taylor on a Butler pass set up Holden’s next score.

Holden running back Jayden Davis-Hacker scampered 30 yards down the Holden sideline to the end zone for the score.

Americo Mabrey toted the pigskin on the two-point conversion for the final points of the first half which ended with the score tied at 14-14.

Late in the third quarter, Jenkins found the end zone on a one-yard run to give the lead back to Holden.

A catch by Mabrey on the two-point conversion put the Eagles ahead 22-14.

A successful two-point conversion knotted the score at 22-22.

Three plays after a pass interference penalty against Butler, Morarity scrambled, then connected with CJ Reifsteck on a pass completion for what would be the game-winning touchdown.

On the two-point conversion, Eagle receiver Lane Siemer delivered a pass on an end around play that fell securely into the hands of Morarity who had slipped out of the backfield to catch the conversion.

Morarity’s touchdown throw, and conversion catch put Holden ahead 30-22. “It was an ad-libbed play,” said coach Diener of Reifsteck’s touchdown catch. “We practice that route, and CJ’s made that catch over and over again. When the quarterback extended the play, he was able to slip behind him, and Aiden put up a great ball on the run. He stepped up when I gave him the opportunity. Tonight we had to have him to win, and he answered.”

Though Siemer delivered on the end around conversion pass, it was his 6 receptions for 36 yards that caught coach Diener’s eye with many of those catches occurring on key conversion downs. “He had great catches,” said coach Diener of Siemer. “He was a huge lift on third down.”

The Bears’ chance of a comeback quickly caved following an unsportsmanlike call against Butler on a touchdown pass reception that was called back due to the penalty.

With under a minute to go, Taylor grabbed his second interception of the game to shut down Butler’s short-lived drive after the nullified touchdown pass. “Taylor had an outstanding game defensively,” said coach Diener. “His two interceptions tonight were great heads up plays.” Morarity downed the ball twice in victory formation to run the clock out on the Homecoming win with the scoreboard set at 30 points for Holden, 22 for Butler.

The Homecoming victory over the Bears moved Holden’s record on the season to 3-1, and represents a tilting point in the season with the MRVC-East schedule remaining before district play begins. “Last year, our biggest win of the year was Homecoming,” noted coach Diener of Holden’s victory over Lexington last season. “It set us up for a winning record, and tonight we put ourselves in the exact same situation. We have put ourselves in a situation where now, if we do what we’re supposed to do during our league, we will host district games.” Coach Diener emphasized, “It’s important for our kids to be out here in front of our crowd – another great crowd, by the way. It’s important for our kids to know that there’s been a lot of Homecomings at Holden Stadium, but the 2022 one is special to them. That was the message before the game today, that we had an opportunity to go out against a team that put us out of the playoffs last year, to make the 2022 Homecoming something to remember. They absolutely stepped up and answered that, and I’m very proud of them. I’m very happy for this community that we’re able to all be a part of it, and have special things happen on Friday nights.”

On offense for Holden, Morarity had 11 pass completions for 148 yards, and 1 touchdown. He carried the ball 7 times for 15 yards.

Davis-Hacker carried the ball 9 times for 41 total yards, and 1 touchdown.

Jenkins had 10 carries for 30 total yards, and 1 touchdown.

Mabrey carried the ball 1 time for 3 yards on a two-point conversion.

Seimer had 6 catches for 36 yards.

Morarity had 1 catch for 3 yards on the two-point conversion.

Mabrey had 1 catch for 3 yards on a two-point conversion.

Jenkins and Siemer each had 1 pass completion on 1 attempt.

On defense, tacklers included Tucker Kauffman with 16 total tackles, Mabrey with 12, Reifsteck with 11, Andrew Johnston with 8, Josh Taylor with 7, Smith with 7, and Bryce Faust with 6. Davis-Hacker and Jacob Andes each had 5 tackles.

Mabrey had 1 fumble recovery, and a team-high 4 tackles for loss. Taylor totaled 2 interceptions.

The Holden football team begins MRVC-East play this Friday, Sept. 23, with a road game at Lexington.