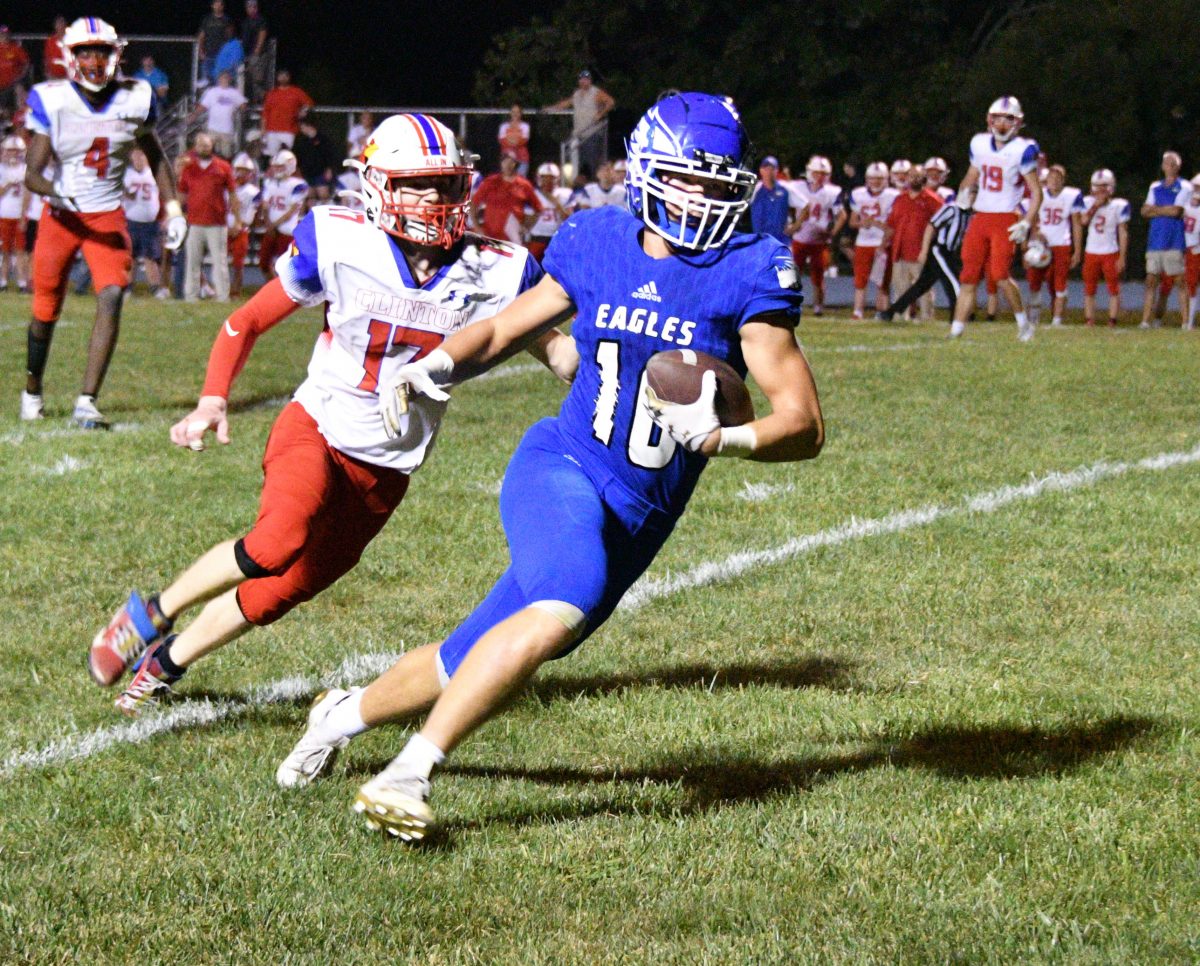 Fast And Furious… Eagle tight end Garrett Smith sprints to the end zone on the first of two touchdown receptions he had in the third quarter of Holden’s home opening game against Clinton on Friday, September 9. The Eagles won the game by the final score of 41-12. Photo by Steve Edwards

The Holden Eagles high school football team took advantage of its first home field appearance of the season on Friday, Sept. 9 by defeating the visiting Clinton Cardinals by the final score of 41-12.

In another second-half surge displayed by the Eagles, Holden scored 34 of its 41 points in the third and fourth quarters.

“I am so excited that our kids got rewarded for their week of practice, because this was our best week of practice for the year” said Holden football head coach David Diener. “For us to be able to come out, and then finally execute what we practiced all week was a big part of it. It took us a little bit to adjust, but once we did, all of our work took over.”

An interception by Eagle defensive back CJ Reifsteck on a Cardinal pass attempt ended a drive by Clinton in the final minutes of the half to help maintain the one-point lead.

Carries by Eagle running backs Wally Walker, Jayden Davis-Hacker, and Jenkins early in the second half put the pigskin on the goal line on Holden’s opening third quarter drive.

Davis-Hacker scored line on a second-and-inches carry for Holden’s second touchdown of the game. Inglis converted the extra-point kick to give the Eagles a 14-6 lead.

“Our backs ran great,” said coach Diener. “We’re finding the niche that we need to, and Jayden’s plays are starting to hit. We finally hit on our counter plays to CJ, and then we know the play action is going to be there. We just have to pick and choose the right time to throw it, and we finally got a rhythm of plays going where we could throw the play action. Then, those plays hit.”

Following a three-and-out drive by Clinton, the play action plan for the Eagles went into effect.

After a 14-yard catch by Reifsteck, and a 12-yard run by Davis-Hacker, Eagle quarterback Aiden Morarity found Garrett Smith on a touchdown pass completion. Inglis booted the extra-point for a 21-6 lead.

The Morarity-to-Smith touchdown combo connected again on a long catch and run by Smith to put the Eagles up 28-6 with just over two minutes to play in the third quarter.

Reifsteck became Holden’s fourth player to enter the end zone on an end-around play on the Eagles’ first drive of the fourth quarter. Inglis converted his fifth extra-point kick to give Holden a 35-6 lead.

“It was great that Clinton gave us a game because it makes us better, playing deep into the quarters,” said coach Diener. “A team like that that’s in a turn-around program that’s doing a lot of good things, they’re going to come out and play hard. We have to match that level of play, and we did defensively. Offensively, there were some people in different spots that we weren’t ready for. Once we got those first few series out of the way, we made our adjustments, we talked things through, and then we were able to roll and go like we needed to.”
Jenkins put the game firmly in control of the Eagles on a second touchdown run for the junior running back by crossing the goal line with just over four minutes to play for Holden’s final points of the game.

“Because we don’t have the one true home run threat that some teams have, that’s how we’re going to have to do it,” said coach Diener. “We’ve got to distribute the ball, and when each kid gets their opportunities, they’ve got to make the most of it. Wally had a good game, too. His carries were a little bit tougher opportunities, but finally he was able to see his seam that he needed to hit and had a couple good runs himself, too.”

The head coach tipped is hat to the Eagle defense which had Reifsteck, Taylor, and Bryce Faust collecting interceptions on the night.

“Our defense played absolutely outstanding,” said coach Diener. “This was a test that we hadn’t done yet with a team that can throw the ball. We really worked hard to make sure that our coverages were sound, and our kids communicated our coverages and got people to the right spots. Overall, our secondary played great. Every single one of them stepped up to a new challenge this week, and really played well.”

In the passing game, Morarity completed 6 passes for 122 total yards, and 2 touchdowns.

Smith had 2 touchdowns on 2 receptions with a total of 80 yards. Lane Siemer caught 3 passes for 28 total yards. Reifsteck had 1 catch for 14 yards.

The win over Clinton moves Holden’s record to 2-1 on the season with no conference games played to date.

“We’re going to have another tough week here with Butler,” said coach Diener. “It’s Homecoming, and it’s going to be another hard-fought game.”

Holden’s game against Butler this Friday starts at 7 p.m. Homecoming royalty will be crowned at halftime of the game.