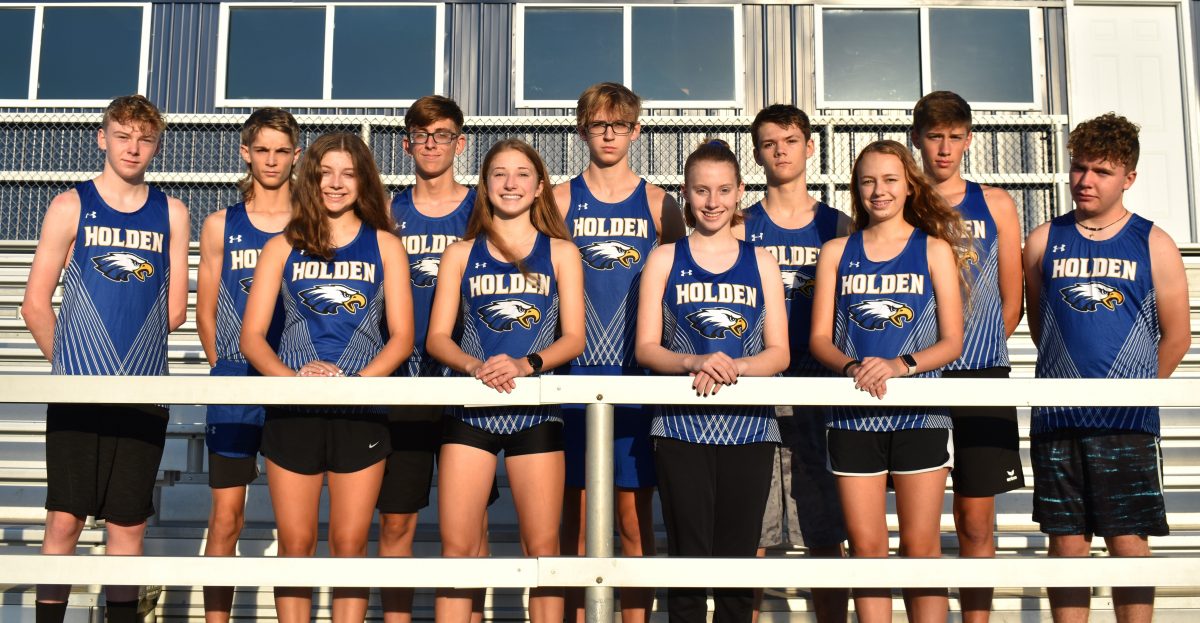 The Holden Eagles and Lady Eagles high school cross country teams are well into preseason preparation for the first meet on Saturday, September 3, at St. Michael the Archangel High School.

In all, the boys team features six returning runners. Young is the lone Lady Eagle returner with three freshmen joining her this season.

“We’ve got a nice core of returning runners,” says Holden cross country head coach Dale Wescott who retired from teaching at the end of last school year, and retains his coaching duties. “We’ve got the three that all went to state last year, and they all three have really worked hard over the summer. Going to state is one thing. I think they want to be a little bit better at state this year.

“We’ve worked really hard the first 10 days. I’ve been really impressed with where everybody’s at. I thought the last few days we’ve had some really nice practices.”

Willis closed out last season as the team’s number-one runner by winning the MRVC-East individual title, placing ninth at the district meet, and placing 56th at the Class 3 State Championships held at the Gans Creek Cross Country Course in Columbia.

Hankins earned the seventh-place All-MRVC-East medal last season, and joined Willis on the medal stand at the district meet with a 20th-place finish to qualify for the state meet. Hankins finished 127th out of 170 finishers at the state meet.

Returning with Willis and Hankins are junior Lukas Hunt, and sophomores Ethan Rice, Caleb Koehn, and Jackson Treece. Foreign exchange student Ruben Wiesmann joins the team this season, and looks to contribute as last year’s returning runners have shown growth in the offseason.

“I think the guys team has improved quite a bit,” says coach Wescott. “We’re excited. Zach was the conference champion. Rett is right there pushing him to be conference champion. Zach wasn’t healthy in track, but he’s healthy now and he’s running really well. It’s going to come down to the next three or four guys, and I feel like all those guys are better.

“Caleb was really coming on last year. He’s looking really good. I think there’s going to be a battle between the three, the four, and the five, which that would be Caleb, Ethan, and Jackson.

“That’s a friendly rivalry,” highlighted coach Wescott. “And then we’ve got Ruben, a foreign exchange student who I think he’s got a chance. He’s showed glimpses.”

Gone from last year’s team due to graduation are Brian Johnson and Michael Rinella who both were four-year team members.

“Those guys were just good guys to have on the team,” says coach Wescott. “They were always consistent, and they were good team members. It’s always tough to replace seniors, but I really think in this case, we’ve got people who are ready to step in.”

Young returns to lead this year’s girls team after placing fifth at the MRVC-East Meet to earn an all-conference medal last season. She added an all-district placing at the end of last season to qualify for the state meet where she placed 131st in a field of 170 runners.

“Ava worked as hard as anybody over the summer,” highlights coach Wescott. “She’s looking really good. As a matter of fact, we ran a 3.1 today, and she was ecstatic because she PR’ed today in practice already in practice over last year.”

“She’s got some rivals coming up,” says coach Wescott of last year’s lone Lady Eagle having company in the nest this season. “She’s got Abby coming up who’s looking really good. They have a friendly rivalry. She doesn’t want the new person to come in and beat her.

“We’ve got Riley Snively who’s hurt,” adds coach Wescott. “We’re not sure if we’re going to have her, or not. She was really good in middle school. So we’re waiting to see on that.

“Malea Brewington can just keep going, and going,” described coach Wescott. “She’s one where if you had a complete team on the girls side, would be like a four or a five.”

The Holden girls team will look for runners to join Young on the medal stand this season.

“I would say I think all three of our girls have chance to be all-conference, and then some of them have a chance to go beyond that,” says coach Wescott. “We’re waiting to see about Riley. I think she would have a chance.”

Coach Wescott is joined by assistant coach Ben Kiger this season as the tenured coaches look for a resurgence in the traditionally strong Holden cross country program.

“It all depends,” says coach Wescott of the cross country team’s outlook this season. “If we win conference, then we’re coming back, because we owned that for a long time. I told the boys that today. I was like, guys we owned that conference for a long time, and we were beating the other side back in the day. So that will be the first step.”

The team gets its first opportunity to test the waters this Saturday, September 3 at the St. Michael the Archangel Meet.

“I’m excited. I told the kids today after the last two days they’ve been practicing good. I’m excited to see what we can do.”

Start time for the meet at St. Michael the Archangel on September 3 is 8 a.m.