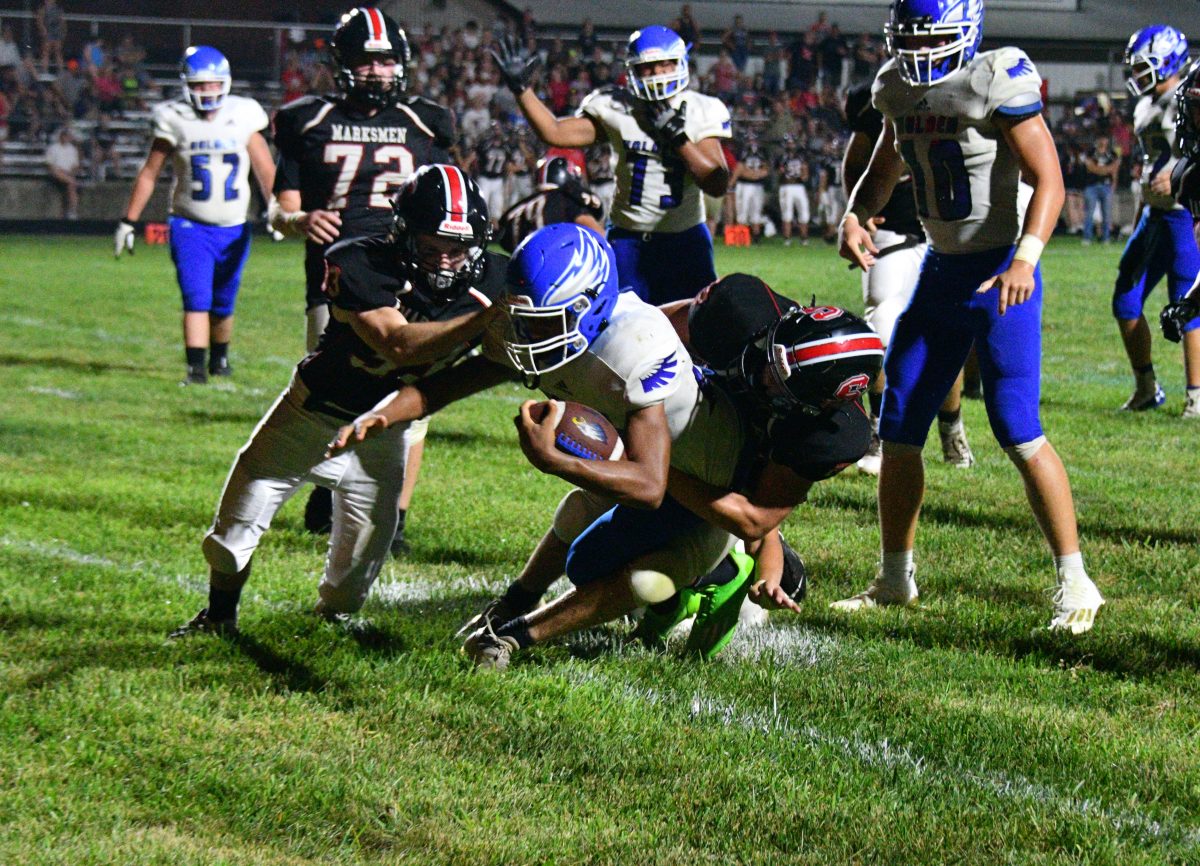 Breaking The Plain… Eagle running back Reco Jenkins carries defenders into the end zone on a five-yard touchdown run in the fourth quarter during Holden’s game at Sherwood Friday, August 26. The Holden football team overcame a 20-0 deficit to win the game by the final score of 26-20. Photo by Steve Edwards

Twenty-six unanswered points scored by the Holden football team pushed the Eagles to a come-from-behind win over Sherwood by the final score of 26-20 on Friday, August 26.

The home team Marksmen took control of the season-opening game for both teams by scoring two touchdowns in the first quarter, and another on Sherwood’s first possession of the third quarter.

“That was totally the tale of two games,” said Holden football head coach David Diener. “When we were on defense the whole time, and got the ball back on offense, we weren’t very good. We were finally able to flip the script, and go 26 unanswered at the end.”

As Holden’s offense struggled in the first half, Marksmen Garhett Cardwell, Lane Doll, and Connor Morris boosted Sherwood’s offense with Cardwell putting the first points on the scoreboard with a 7-yard run near the end of the first quarter.

Cardwell scored again on a one-yard dive with just over eight minutes remaining in the second quarter.

“We knew going in those (Cardwell and Doll) two were their big backs, and the kid that really stuck out that we didn’t read well on film was five (Morris),” said coach Diener. “Five played a really good game.”

Halftime adjustments provided Holden the opportunity to weather the 12-0 deficit they faced at the intermission.

The Marksmen put their final points on the scoreboard on a 26-yard touchdown run by Cardwell with just over eight minutes remaining in the third quarter.

The Eagles found their spark play on Holden’s following possession when CJ Reifsteck hauled in a 24-yard catch on a throw from quarterback Aiden Morarity.

That spark led to a drive that ended with a five-yard touchdown run by Eagle running back Reco Jenkins with 1:53 remaining in the third quarter.
“CJ absolutely…that was a huge conversion,” said coach Diener. “That was a huge catch. Our theme is if we can have one great conversion, we score after that a majority of the time. Our percentage is up, but we’ve got to have that one conversion to get the sticks moving. That play to CJ was absolutely the jump we were needing.”

Aside from Sherwood’s third quarter score, the Eagles’ defense silenced the Marksmen offense late in the game.

Holden’s offense also adjusted to the defense presented by the home team early in the game, and found open running room behind the left side of the offensive line.

“And then, we were able to roll from there,” said the head coach as he noted that the Eagle running backs found open space behind the left side of the offensive line. “That’s the thing. It was the right match-up. Normally, we do like to run to Aiden’s side, but that was where our match-ups were favorable, was to our left side.

“It was really just to get them believing,” continued coach Diener. “One, we had to learn how to block their defensive front. I had to sit there, and talk them through how we needed to block their D front. Once we were able to do that, then the plays started hitting. Reco and Wally (Walker) found their strides in the backfield with their one-two punch, and we were finally able to click with the running game. And then that set up the passing game.
“Garrett (Smith) had two great catches on the corner route down here to get some chunk yards. That’s going to be our game…we’re going to pound the ball, pound the ball, pound the ball, and try to get some chunks on play action.”

Jenkins added a second touchdown run early in the fourth quarter. Jenkins delivered a complete pass to Garrett Smith for a successful two-point conversion on a halfback pass to cut Sherwood’s lead to 20-14.

Holden capitalized on a Sherwood fumble halfway through the fourth quarter by converting the Marksman loss into points.
Following big gains by Jenkins and Walker after the fumble, Smith pulled in a touchdown catch from Morarity to tie the game with just over six minutes remaining in the fourth quarter as Holden’s running game began to wear down the Sherwood defense. A failed extra-point attempt left the score knotted at 20-20.

With the game clock ticking down under three minutes, the Marskmen turned the ball over to the Eagles on downs.
Morarity’s number was called on a third-and-goal play from the one-yard line for a game-winning quarterback sneak that set the final score at 26-20 with 46 seconds remaining.

The next time Morarity touched the ball was in the V formation to down the ball for the Holden victory after Sherwood turned the ball over on downs on their possession after Morarity’s sneak play.

“It was game one,” stated Diener. “We had the early turnovers. We had a lot of missed assignments on defense, and they were were good enough to take advantage of it. We knew that going in that if we played our rules, we were going to be able to contain the outside run, and be able to force things back into our numbers.

“The thing is, our ball carriers needed this game to understand still how to fit, and how to become varsity ball carriers. The fact that our two running backs weren’t playing defense…and when they came on in the second half, they were a step faster than everybody.”

Jenkins finished the game with 2 touchdowns, and 181 rushing yards on 28 carries.

Smith had 4 catches for a total of 78 yards receiving, and 1 touchdown catch.

Reifsteck had 1 catch for 24 yards.

Reifsteck led the defense with 10 tackles, and 1 sack.

Davis, Americo Mabrey, Aiden Christian, Andrew Johnston, and Isaac Bell each had a sack. Kale Tryon had a fumble recovery.

The Holden football team takes its 1-0 season record to Mid-Buchanan High School in Faucett this Friday, September 2. Kickoff for the Eagles versus Dragons (1-0) match-up is set for 7 p.m.