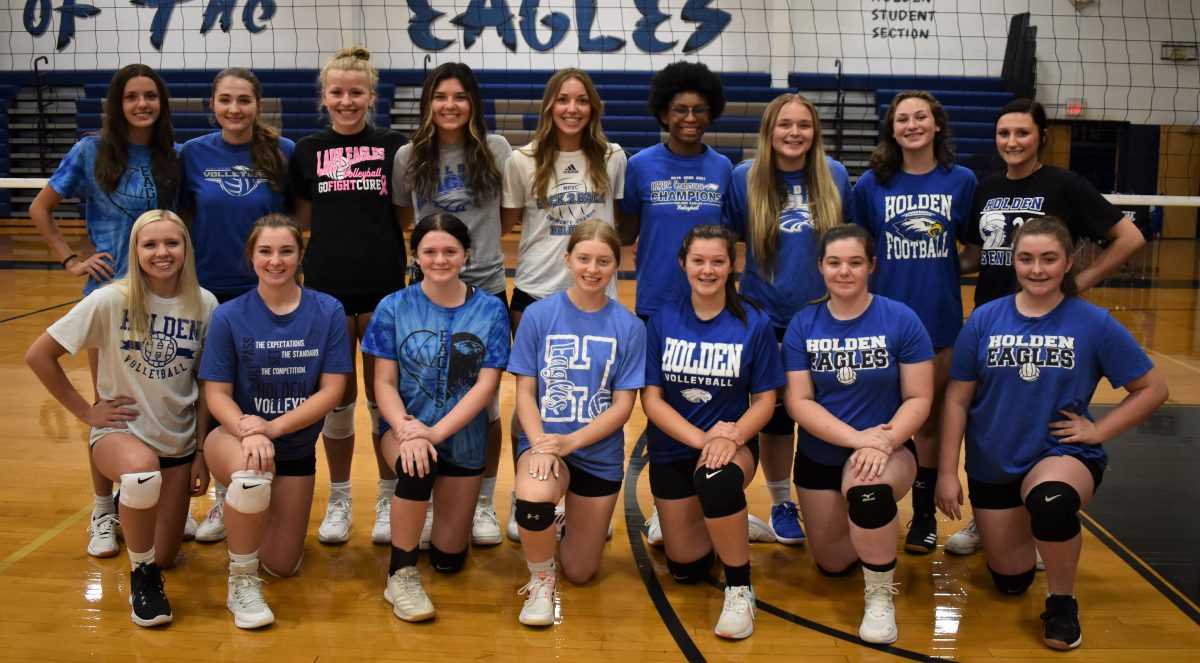 The Holden volleyball team welcomes new head coach Tori Florence this fall with the upcoming regular season set to start on Tuesday, August 30 in a road match at Cole Camp.

As coach Florence takes over coaching duties from Julie Carver who guided the Lady Eagles for the past three seasons, Florence is greeted by six seniors set to lead this year’s team during the season.

“I first met the girls on May 23 at school,” says coach Florence. “My message to the girls was that I knew I was going to do things differently than the previous coach, but I asked for open communication and trust that I was going to lead them to a successful season while allowing them to give input into what things worked for them as a team in the previous season.
“I stressed to the seniors that their voice would be heard when trying to navigate through how the seasons have been ran in the past.”

Those seniors who will provide a voice of guidance this season include Gracie Carver, Tristyn Powell, Sara Ayler, J’Lee Jones, GiGi Jones, and Natalie Moss.

Powell returns this season as a three-time all-conference player. She added all-district recognition after last year’s campaign in which the Lady Eagles volleyball program wrapped up its third consecutive MRVC-East championship.
Coach Florence, a Wellington-Napoleon graduate, takes over after most recently serving as the junior varsity coach for the Odessa girls basketball team, and is aware of the current consecutive conference clinch streak.

“I had done my research on what the previous seasons had looked like prior to accepting the position,” says coach Florence. “Though I was confident that the foundation of the program had been successful, and that was the expectation, I knew coming in I had to focus on the returning players and upcoming players to continue that success into this season.”
Missing from this year’s team are graduated seniors Emma Lohe, Elaina Young, Kalie Slack, Laila Seiz, Brady Hinton, and Lena Weeks with those players contributing to the recent success of the volleyball program.

Coach Florence is now focused on the system established by those players as this year’s team members confidently move up a grade level.

“As I previously stated, I was not concerned in what the team had lost because I was aware of what coach Carver expected of the girls, and that the foundation was strong,” says coach Florence. “I knew that the girls stepping up to the positions where previous seniors were would have no problem filling their shoes.

“In the offseason this summer, we worked on fundamentals, and adjusting to those underclassmen stepping up.”
Those underclassmen on this year’s squad looking to find success as they fill their roles include juniors Alex West and Chloe Idsigna, along with sophomore team members Izzy Guinn, Emilee Haggard, Jaci Gower, Cami Agee, Grace Kendrick, and Kia Harmon. Gower returns after earning all-conference and all-district recognition last season as a freshman.

Joining coach Florence as an assistant coach this season is Emily Purnell.

“She has been a huge help in the transition of the players adjusting to my coaching,” says coach Florence. “Our focus in the preseason has been building a dynamic between the players, and finding out what works for the team we currently have. My main focus in the preseason has been finding out our strengths as a team, and using those as well as our weaknesses, to be able to correct before the season.”

Notable strengths of the team entering the season are provided by the veterans who return with proven experience.

“I see some of my key players being Gracie Carver, and J’Lee Jones playing in the middle positions,” says coach Florence. “I see Tristyn Powell being a vocal leader and setter for the team, and Jaci Gower with playing varsity as a freshman…having that experience has only made her better on the back row.”

As the season approaches, coach Florence assesses the this year’s team, the conference landscape, and the season as a whole while the Lady Eagles shift to a new season with recent past success in the rearview mirror.

“With Holden being the conference champs three years in a row, I don’t expect anything less than that for this year,” says coach Florence. “We will have some competitive teams like Knob Noster and Higginsville. The seniors have competed with these teams for three years, and they are hungry for the title again this year.

“Though winning is important, we have an overall goal of becoming a team. With having some players in a new position, and I being a new coach, it is important for us to come together as a team so we can be successful.

“The players and I are excited to put all the work we have done this summer into our first game,” notes coach Florence. “I am excited to see how this group can come together, and achieve our team goals as well as individual goals.

“The fans can expect to see an intense group of players that are working hard, and not stopping until we get to the top.”

The climb to the heights that this season offers begins at Cole Camp on August 30. That night the JV team kicks off the regular season with a 5 p.m. match. The varsity contest against the Lady Bluebirds follows with a scheduled start time of 6.