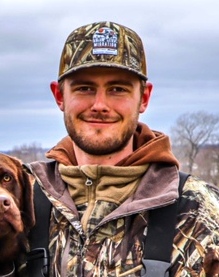 We regretfully announce the sudden passing of Eric Matthew Thomason, 23, of Holden, Missouri.

Eric passed away on June 18th, due to a fatal vehicle accident.

Born September 27, 1998 to Mark and Delight Thomason in Warrensburg, MO, Eric grew up with siblings Tyler Bruns and Riley Thomason on the family farm.

He found a natural aptitude with mechanics and nature.

Eric graduated from Holden High in 2017 and was known for being an excellent athlete and sportsman.

Eric Thomason would most often be described as both a kind, gentle person and the life of the party.

Eric would describe himself as a jack of all trades master of none.

First and foremost was his partnership with Bailey Lohe.

Eric and Bailey were high school sweethearts, and after dating for seven years, they married on July 10, 2021.

During their time together, they learned to navigate through life’s obstacles as they grew up.

Eric was a skilled outdoorsman, often dedicating his time to introducing new hunters and fishers to nature on the farm.

Eric could often be found training his Chocolate Labrador Ruger, They found joy in the yard as much as a duck blind.

He was also a founding member of the Winged Obsession outdoor media group.

Eric regularly enjoyed riding his motorcycle and working on a multitude of projects.

One of those projects was the restoration of his father’s 1989 Chevrolet Silverado with his dad, Mark.

With all his hobbies spending time with family and friends was what he loved most.

Whether it was swimming, watersports, hunting or just simply hanging out, Eric could always be found making someone’s day a bit more adventurous.

Above all Eric would be known for his service before self.

A dedicated member of Fire Dist. #2 Eric would leave his loved ones to save others and support his community.

Eric’s impact extends beyond his family and friends.

This loss will be felt community-wide and beyond.

The family will hold a celebration of life Gathering, in Eric’s name, at Williams Funeral Chapel in Holden, on Thursday, June 30.

There will be a sharing of memories starting at 4:30 p.m. immediately followed by open visitation from 5:00 to 7:00 p.m.