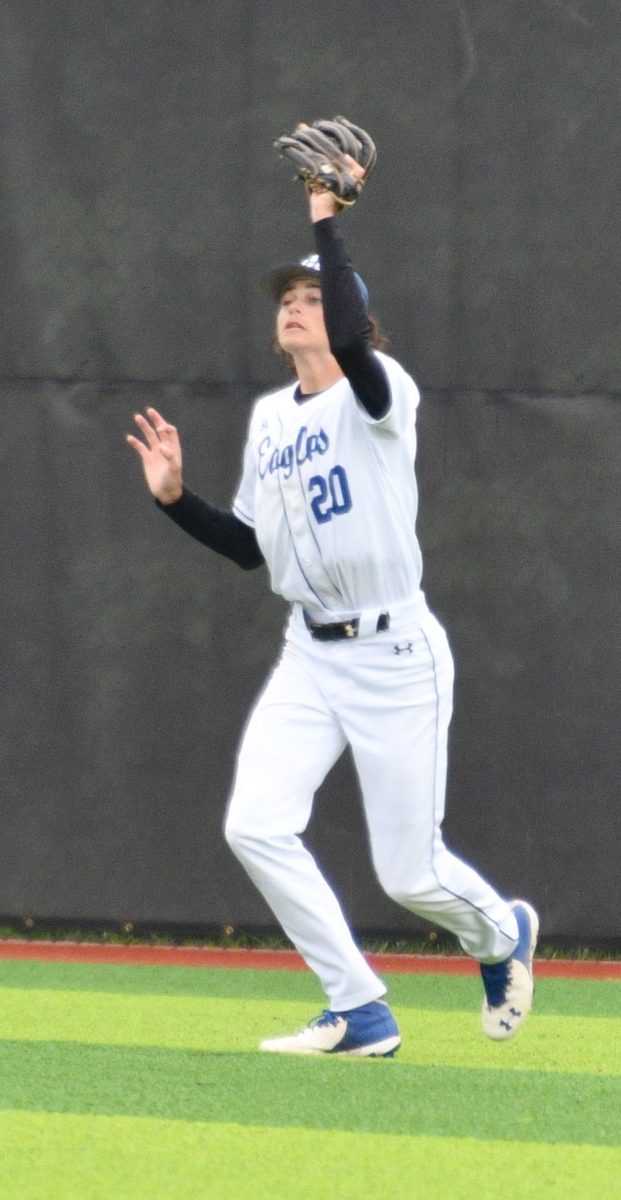 Solid Defense… Eagle right fielder Justin Radunsky pulls down a fly ball for a catch during Holden’s state sectional game against Stockton on Tuesday, May 24. Photo by Steve Edwards

A week after winning the Class 3, District 14 Tournament championship game, the Holden Eagles baseball team fell to Stockton in the sectional round of the Class 3 MSHSAA Baseball State Tournament by the final score of 3-2 on Tuesday, May 24.
With all of the runs scored in the game being posted in the first three innings, the Tigers plated a run in each of the first two innings for an early 2-0 lead.
The Eagles answered with two runs in the top of the third inning as the visiting team on the scoreboard in the game that featured a change of venue from the Eagles’ home field to the baseball field at Warrensburg High School due to field and weather conditions in Holden.
Stockton scored what would be the final run of the game to take the lead in the bottom of the third.
“It’s a tough one,” said Holden baseball head coach Charlie Castle. “It could have gone either way. We probably just didn’t hit enough to deserve it as much. We made a few more mistakes than they did early in the game, and it ended up being the difference. I’m proud of the kids. It was two good teams, pretty evenly matched.”
Holden’s biggest key hits of the game were delivered in the third inning to produce runs as the Eagles tied the score at 2-2.
After senior center fielder Hunter Higgins led off the third inning by reaching base on an infield ground ball, starting pitcher Garrett Smith lined a triple to left field two batters later to plate Higgins.
With Smith on third base, left fielder Danny Hartzler played the role of equalizer by hitting a deep fly ball to right field. Smith tagged at third base, and reached home plate on Hartzler’s sacrifice fly.
“We had two runs, five hits…we battled, but that’s the one thing, I think we improved so much as a team this year,” said Castle. “We wanted to put the ball in play. We did that for the most part. We just didn’t get enough guys in scoring position to make a difference, or get a clutch hit.
“Garrett had the big hit there. Danny got a sac fly. We didn’t string enough hits together.”
Stockton regained the lead in the bottom of the third inning when a double plated a Tiger runner who had reached base after being hit by a pitch.
For Holden’s Smith, getting the call to start on the mound in the sectional round of the state tournament marked the biggest stage of his career to this point.
Smith ended the game with six strikeouts in seven innings pitched while allowing five hits.
“That’s good for him,” said coach Castle in regard to Smith’s opportunity to pitch in a state sectional game. “He pitched well.”
Aside from a couple of close calls at first base with Holden on defense that went in Stockton’s favor during the game, the sectional contest featured a cleanly played contest with Holden displaying multiple highlight reel plays including a line drive catch by second baseman Lane Siemer in the first inning, and noteworthy grabs in the outfield throughout the game.
Freshman catcher Aiden Christian provided a throw to second base handled by shortstop Aiden Morarity to shut down a Tiger steal attempt in the fifth inning.
“Danny and Hunter made some great catches out there,” highlighted coach Castle. “Justin Radunsky had a nice running catch. Defense was pretty good at times.
“Danny made a real strong throw to third to nail a runner trying to tag up on a fly ball, and Hunter made a diving catch in center. It was great to see the two senior starters go out making some nice plays.
“We will definitely miss those two, along with Chance Agcopra, as they are good kids who did a lot for Holden athletics,” said coach Castle.
Stockton ended the game with five hits.
For Holden, Hartzler, third baseman Carson Gard, and first baseman Kale Tryon each had hits to go with Smith’s RBI triple.
The Eagles end the season with an overall record of 17-6, and an MRVC-East mark of 5-5. In April, the Eagles won their home tournament by defeating Odessa in the championship game of the Holden State Farm Classic. The Eagles won the Class 3, District 14 Tournament championship by defeating St. Michael the Archangel on May 17 to advance to the sectional round of the state baseball tournament.
Posted in Sports