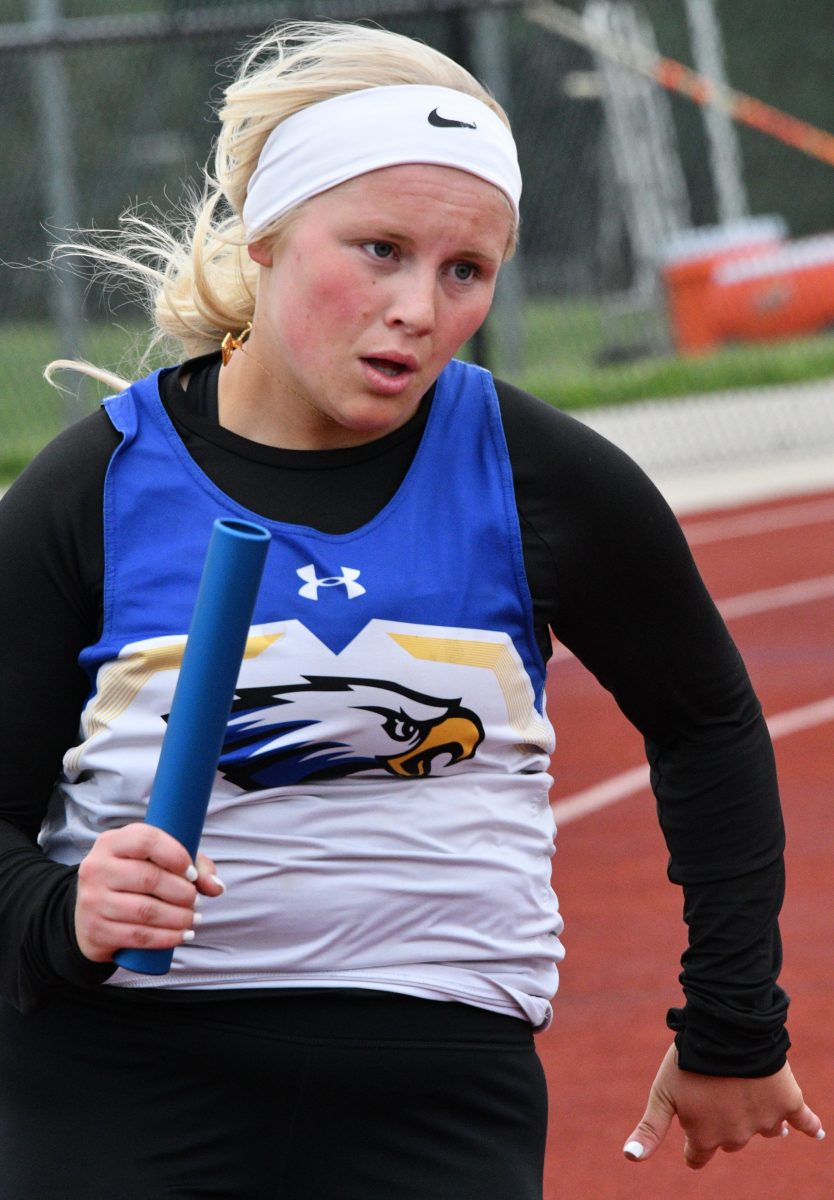 Harmon’s sectional title came in the high jump, and was decided by the tie-breaker as she and Eldon High School high jumper Zoe Martonfi both turned in a height of 1.6m on the day.

Harmon also qualified for the state meet by placing fourth in the long jump with a distance of 4.79m.

The four-event sectional qualifier Harmon placed sixth in the 100m dash at the sectional meet.

Harmon, Kimmie Spring, Rachel Wamsley, and Clara Hernan carried the baton in the 4x100m relay for a sixth-place finish in a time of 53.36 seconds at the sectional meet.

Stout will close out her Holden track and field career by competing in the shot put at the state meet after securing a spot in Jefferson City with a third-place finish at the sectional meet.

Stout opened her senior season with a distance of 10.8m to win the shot put at the UCM Indoor Relays on March 21. The senior posted a distance of 11.63m to claim the sectional bronze medal.

“She was still playing basketball when we started with practices, so she kind of got a late start,” said Holden throwers coach Mark Weddle. “We started out really good at UCM. It’s been a fun run.”

Opening the season with her shot put win at the UCM Meet after not competing in throwing events for the past two seasons set the course for Stout’s season to conclude at the state meet.

“It’s always a goal, but with Liz I knew coming in that was kind of what we wanted to shoot for,” said coach Weddle.

In the discus, Stout recorded a distance of 26.82m at the sectional meet to place sixth.

Senior Brian Johnson signed off in his senior season by placing sixth in the 400m dash in a time of 54.40 seconds. He set a personal record time of 52.44 seconds in a third-place finish at the district meet.

Over the season, Johnson regularly competed in the 100m dash, and the open 400. He also carried the baton on Holden’s 4x100m relay team, and the 4x4000m relay team.

Johnson described the final 400m dash of his Holden career.

“In the moment it felt good, but right when I got past the 200 mark, my legs started giving out,” said Johnson who had to adjust to competing in just one event at the sectional meet after competing in four events at most meets. “I feel like it’s weird because you have to warm up more. (In a regular meet) when you first start running, you’re already warmed up basically, so you don’t have to warm up again. But for just one event, I feel like it’s harder on yourself because you’ve got to warm up more, and get focused.”
The senior sprinter, along with teammates Powell, Reco Jenkins, Wally Walker, and Sam Comer invigorated Holden’s relay, and individual sprints program this season with multiple medal finishes over during the season. Through it all, Johnson describes the 400m dash and the short sprint relay as his favorite races, and was happy with his senior campaign, his Holden career, and the emerging sprinters on the team.

“I think it went pretty good,” said Johnson of the season. “I really like the coaches, and the team that I had by my side. It made me run faster.”

“It’s my favorite one,” said Johnson of the 400m dash. “And I did like the four-by-one, too, especially with the team. I liked the competition. I feel like it made me faster, and better as a person.”

Millie Davidson in her junior season, and Lilee Keller in their freshman campaign both saw their seasons come to a close with an appearance in the 100m hurdles at the sectional meet. Running in lane one, Davidson placed fifth with a time of 17.89 seconds. Keller clocked a time of 18.05 in lane eight to place seventh.

Also competing in individual events from the Holden girls team was Clara Hernan who placed eighth in the 200m dash with a time of 27.93 seconds.

Freshman Cole Zillner for the boys team placed eighth in the high jump with a height of 1.65m.

For Stout, Powell, and Harmon the season continues at the Class 3 Track and Field Championships in Jefferson City this Friday and Saturday, May 27 and 28 at Adkins Stadium. Stout in the shot put, and Harmon in the long jump and the high jump are set to compete in their event finals on Friday. For Powell, the 110m hurdles, and 300m hurdles preliminaries are scheduled for Friday. The hurdles finals for both races are set for Saturday.