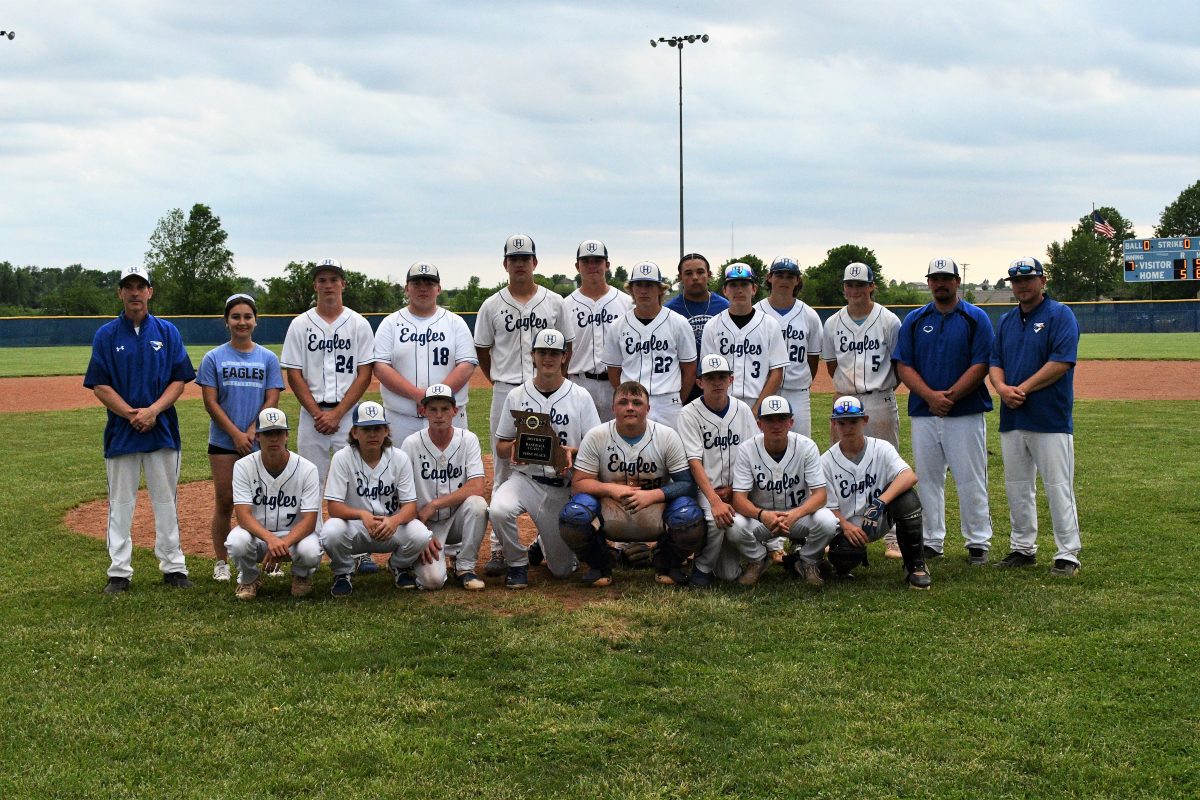 Five runs scored in the first inning by the Holden baseball team against St. Michael the Archangel in the championship final of the Class 3, District 14 Tournament proved to be plenty for the Eagles as they secured the district title by the final score of 5-1 on Tuesday, May 17.

A complete game performance by Holden starting pitcher Garrett Smith on the Eagles’ home field was backed up by key defensive plays to limit the Guardians’ scoring opportunities throughout the game.

“It is great to win a district title,” said Holden baseball head coach Charlie Castle. “I knew whoever got off to an early lead would have an advantage. Garrett, he was a bulldog out there. He just pitched great.”

At the plate, Smith set the table in the first inning with a double to get the Eagle bats going. Aiden Morarity singled to score Smith for the first run of the game.

Senior left fielder Danny Hartzler singled to put two runners on base. He was followed by freshman catcher Aiden Chritian who singled to score Morarity.

Freshman first baseman Kale Tryon stoked the first inning fire by knocking a triple that sent Hartzler and Christian across home plate. The fifth run of the first inning was provided on an RBI single hit by right fielder Justin Radunsky.

“I thought it was going to be a good, really close game,” said Hartzler. “Then, once we got those five runs in the first inning, it just felt like we had to do everything to back up Garrett on defense. It was just a great team effort out there.

“We were just making plays all around, and backing up Garrett. There were a couple jams he got out of…we just made a clutch defensive play to get out of trouble.”

Holden’s production in the first inning put the Guardians in a comeback situation that was restricted by Smith recording six strikeouts on the hill, and the Eagles playing solid defensive to offset the hits the Guardians did collect.

“My mindset was to limit mistakes…limit walks was a big one,” said Smith. “Towards the middle of the game, they started hitting the fastball, so I had to resort to offspeeds. That was working really well there at the end of the game.”

The lone score by the Guardians came in the third inning on an unearned run as St. Michael found ways to put the ball in play.
“I wasn’t phased,” said Smith. “I knew they were going to hit the ball. I knew that going into the game.”

After a catch by Christian in foul territory in the sixth inning, Tryon displayed the dynamics of the Eagle defense by completing a double play on an acrobatic tag in the seventh inning. Third baseman Carson Gard handled the ground ball, and the throw to second baseman Lane Siemer for the first out on the play.

The final out of the game was recorded on a strikeout by Smith.

“The defense was great tonight,” said Smith. “Defense really, really helped me tonight. Kale as a freshman stepping up this year is amazing. He’s done unbelievable this year.”

The winning pitcher tipped his cap to his catcher as well.

“He did very well tonight,” said Smith of Christian’s performance. “Tonight was one of his best games.”

Coach Castle also noted the play of Tryon and Christian.

“First baseman Kale Tryon had a big two-run hit in the first inning, and turned an unassisted double play in the first when he snared a hard line drive to double up the runner,” highlighted Castle. “He had a little more bounce in his step for the district tournament, and his energy set the tone for us.

“Another freshman stepped up as Christian did a great job behind the plate. It was probably his best defensive game. He was terrific receiving the ball, helping call the game, and made a big catch on a foul pop.”

The pivotal first inning punch provided by the Eagle offense stood out to coach Castle in analyzing the game. “Aiden Morarity had an RBI hit to start the scoring, plating Smith who had doubled. Aiden Christian and Justin Radunsky also had RBI hits to get us rolling.”

For Hartzler, and senior teammates Hunter Higgins and Chance Agcopra, the district championship win that was bolstered by the first inning occurred on the last day of classes for the Holden seniors.

“It just makes the feeling even better,” said Hartzler. “That was electrifying. We had the energy rolling, and we didn’t feel like anything could stop us after that.”

Eagles Defeat Butler In District Semifinal GameThe top-seeded Eagles defeated Butler by the final score of 8-1 in the semifinal round of the district tournament on Monday, May 16.
Holden starting pitcher Lane Siemer allowed just three hits in a complete game performance. Siemer walked four, and struck out seven as the Bears scored one unearned run.

“Lane is 7-0 on the season,” noted coach Charlie Castle.

With the win, the Eagles baseball team moved into the district championship game for the second straight season after finishing as the district runner-up last year.

Coach’s Corner
“It feels great,” said coach Castle of the Holden baseball team winning its first district title since the 2018 season when the Eagles finished in third place in the state tournament under then-head coach David Riley. “A lot of credit to coach Riley. It’s his program, and I’m excited for all these kids to get another banner up there on the wall. It’s great for our kids after dropping a heartbreaker in the district championship last year. It felt like this was for them, and coach Riley. It’s been a fun year.”

The Eagles advanced to play in the sectional round of the Class 3 State Baseball Championships on Tuesday of this week. Holden fell to Stockton in the sectional game by the final score of 3-2. Look for the complete game article in next week’s edition of The Holden Image.