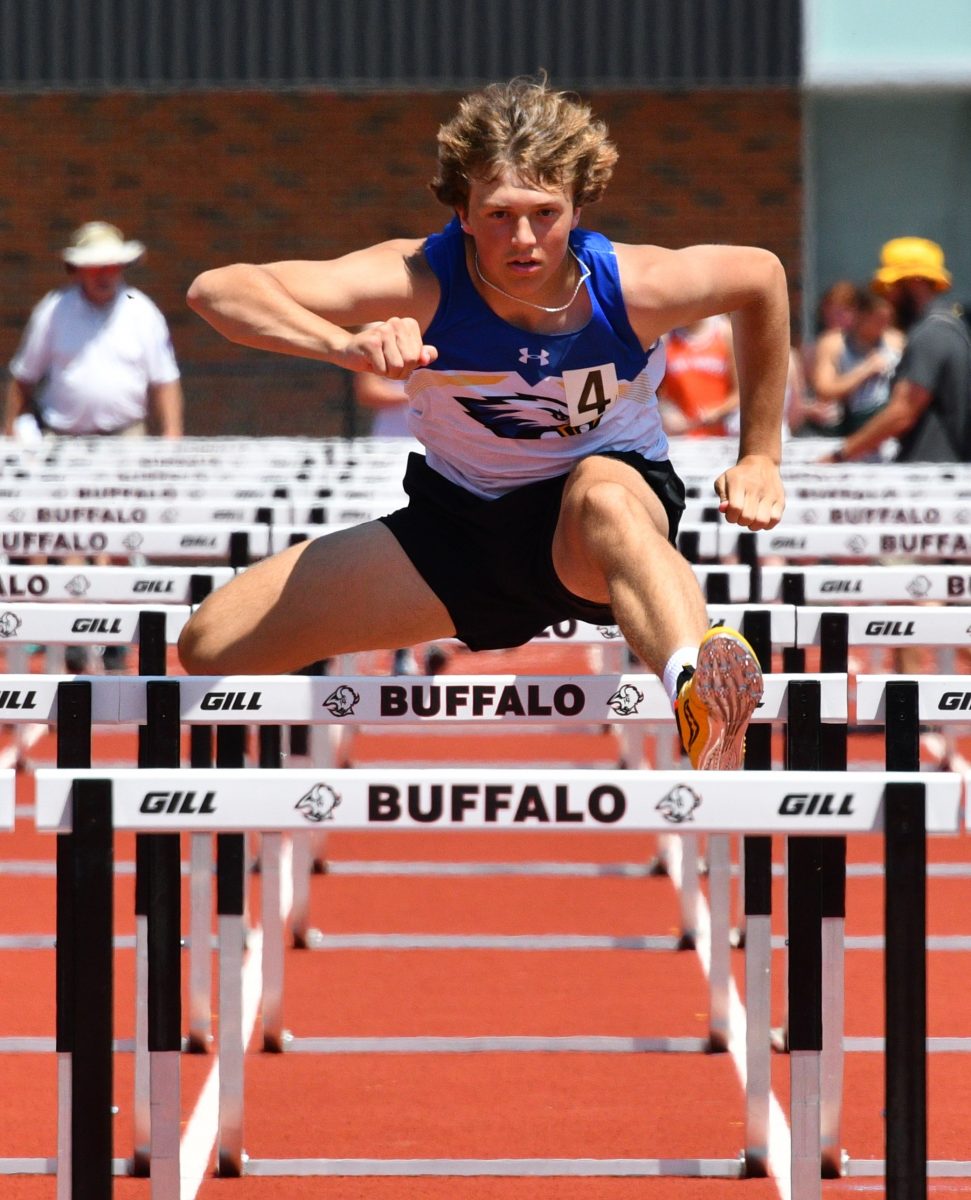 Hurdles District Champion… Eagle hurdler Masyn Powell won the individual title in the 110m hurdles at the Class 3, District 7 Track and Field Meet with a first-place finish in a personal record time of 15.68 seconds. Powell, senior Brian Johnson, and freshman Cole Zillner each captured top-four finishes at the district meet to advance to the Class 3, Sectional 4 Meet at Odessa High School this Saturday, May 21. Photo by Steve Edwards

The Holden Eagles high school track and field team placed eighth out of 13 teams competing at the Class 3, District Meet at Dallas County School District in Buffalo on Saturday, May 14.
Hurdler Masyn Powell marked the day by winning the district title in the 110m hurdles as he earned a spot at the sectional meet with a top-four finish.

Powell timed out at 15.68 seconds to claim the gold medal district finish in the 110m hurdles race, a little over a week after claiming the MRVC-East championship at that distance.

Powell went on to place third in the 300m hurdles at the district meet with a time of 43.16 seconds.

“Masyn, we knew was going to be a great hurdler this year,” said coach Diener. “He is really coming on strong here late as he continues to PR each meet.

“His most recent run puts him in the top 50 in the entire state, and if he continues to make improvements, he will have a real shot at going and placing at state,” said coach Diener.

Sifted down, Powell’s top-50 ranking in all classes in the state of Missouri breaks down to the sophomore sitting in the top-10 among Class 3 110m hurdlers at this point in the season.

Senior sprinter Brian Johnson returns to the sectional meet this season after advancing to the state sectional round last season.

On Saturday, Johnson recorded an all-district third place finish in the 400m dash by clocking a time of 52.44 seconds.

Johnson secured team points for Holden with a fifth-place finish in the 100 dash at 11.67 seconds, and carried the baton on the anchor leg of both the 4x100m relay, and the 4x400m relay for Holden.

Johnson, Powell, freshman Sam Comer, and junior Wally Walker toted the baton in the 4×400 relay for a sixth-place finish.

In the 4×100 relay, Johnson, Comer, Walker, and sophomore Reco Jenkins teamed up to place seventh.

“Brian is such a hard working, good kid that it is exciting to see him be able to move on,” said coach Diener. “He has anchored two of our relays this year, and will be tough to replace moving forward. He just missed the 100m, so it was great that he got to make it in the 400m.”

Freshman high jumper Cole Zillner moved up to the Holden boys team’s number-one spot on the depth chart in the event with junior Tyler Hankins hindered by a late-season injury.

Zillner finished in fourth place at the district meet on Saturday with a height of 1.7m.

“Cole has had a great season, and took advantage of an opportunity on Saturday to jump his best jumps of the year,” said coach Diener.

Hankins placed eighth in both the high jump, and the pole vault on the day.

Jenkins scored team points in individual events both on the track, and in the arena of field events by placing seventh in the 100m dash, and eighth in the triple jump.

Though not moving onto sectionals, Jenkins is set to return as a leader next season among a solid core of sprinters.

“Reco has made great improvements this year,” said coach Diener. “To make the finals in that district is a tremendous accomplishment, and will be great experience for him next year. As he continues to put in work in the offseason, he is going to be able to step up, and fill some of the holes that Brian is leaving next year.”

Senior Michael Rinella, and freshmen Rett Hankins, Jackson Treece, and Ethan Rice carried the baton for Holden in the 4x800m relay in a sixth-place finish.

Rett Hankins placed seventh in the 3200m run to chip in team points on the day.

Senior thrower Garrett Abel closed out his senior season district meet with an eighth-place finish in the shot put. He placed 12th in the discus.

Sophomore Marshall Doogs placed 10th in the discus for his top throwing performance on the day.

“Our boys throwers all had PRs, and just missed moving on,” noted coach Diener. “Sauren Folson broke his own school record (in the javelin) with a throw of 40.15m”

After setting a personal record at the conference meet, senior pole vaulter Wyatt Doutt failed to clear a height at the district meet as starting vault heights moved up in the postseason competition.

“For the seniors who ran their last meet, I am thankful for their leadership,” said coach Diener. “This group really stepped up, and led this group of 74 track athletes. Michael had a great senior year, winning, and placing in different meets in the 800m. Wyatt Doutt in pole vault had a great year, and was vaulting his best at the end of the year which is all you can ask for as coaches.”

The Class 3, Sectional 4 Track and Field Meet will be held at Odessa High School this Saturday, May 21. The start time is 9 a.m.