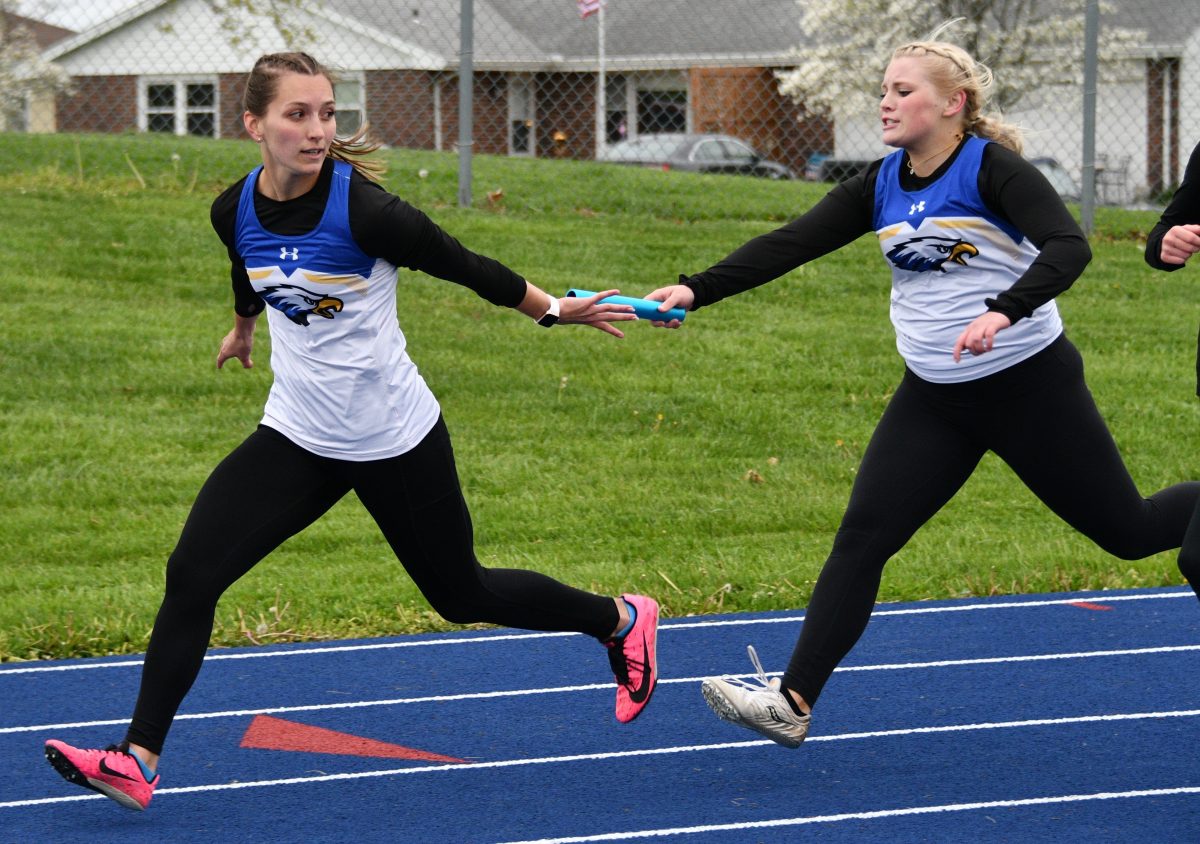 In a change of venue from Carrollton High School to Higginsville due to field and track conditions at Carrollton, the Lady Eagles with 148 team points outdistanced the second-place host Lady Huskers who totaled 131.75 points.

Freshman Kia Harmon, and senior Liz Stout headlined the meet by taking individual titles – Harmon in both the high jump and the long jump, and Stout in the shot put.

“I am very proud of the girls,” said Holden track and field head coach David Diener. “Going into the meet as a staff, we knew we would have a good chance at winning the conference meet, if our girls went out, and performed like they needed to.”

“As big as the 10 points are in placing first, when we get a chance to have two athletes score, you can balance out those placings quickly,” said coach Diener. “We had many different double placers, and then in the high jump we were able to go first and second place with Marah (Klover) and Kia in the girls’ event.

Harmon posted a height of 1.6m in the high jump, and long jumped 4.93m in her two conference championship performances. She placed second in the 100m dash with a time of 13.49 seconds.

Harmon carried the baton with teammates Kimmie Spring, Rachel Wamsley, and Clara Hernan in the 4x100m relay for a second-place finish. Harmon herself totaled 30 points for the team effort.

“Kia is a special athlete,” said coach Diener. “Not everyone has her talent. She will continue to post great numbers as she continues to improve her technique in the field events, and gets stronger in the weight room.”

“Liz has been a great three-sport athlete for Holden High School over the years, and I am excited that she was able to be healthy and successful this year,” said coach Diener as the shot put school record holder Stout returned from an injury last year, and was forced to sit out her sophomore season due to the cancellation of the track and field season in 2020. “This year, she was able to set the school record in the shot put, and is going to have a great opportunity to make a run in the postseason series of track meets.

“She is a competitor, and all of our girls throwers are a reason we have been so successful as a team which is led by Liz competing in all three throws. Coaches (Mark) Weddle and (Luke) Littrell have done a great job with our group of throwers this year, and credit goes to them and the athletes they work so hard with each day.”

Klover’s second place finish in the high jump was decided by the tie-breaker as she matched Harmon’s 1.6m.

Klover went on to run on Holden’s third-place 4x400m relay team with teammates Guinn, Wamsley, and Gracie Carver in the signature final event of all track and field meets.

“The girls 4×100 team, and girls 4×400 team both ran PRs,” noted coach Diener. “Rachel Wamsley has been running her best splits of the year here these last couple of meets in those events.”

Guinn and Young also forced the tie-breaker in the pole vault with each vaulter clearing 2.35m. The senior Young finished in second place as she set a personal record (PR) with Guinn taking third.

“Elaina has had a great senior year, and Izzy is a young talent who is going to continue to be successful in pole vault, and other events in the future,” said coach Diener. “All year, they have consistently placed in the top of pole vualt. Both have improved, and reached PR heights this year.”

Hurdlers Davidson and Keller stacked up points in the barriers races with Davidson placing second, and Keller third in the 100m distance for top-three all-conference finishes. In the 300m hurdles race, Davidson placed third with Keller placing fifth.
The freshman Keller stepping up to rank highly with veteran Davidson in her junior year season stood out to coach Diener as he marked, “Lilee Keller getting third in hurdles as her times continue to improve each meet,” as a top finish that stood out to him.
Holden’s 4x200m relay team of Wamsley, Hernan, Kimmie Spring, and Klara Tschoepe took the all-conference third-place medal finish.
Tschoepe at second place in the javelin, and Chloe Hernan at third place in the shot put joined the list of Lady Eagles earning all-conference finishes.
“Sophomore Chloe Hernan has come on strong late in the season with shot put, and to get a third-place at conference was a great performance for her,” said coach Diener.
Freshman Ava Young’s all-conference third-place finish in the 3200m run prior to the 4x400m relay race signified a tipping point in the Lady Eagles’ conference championship as the team points total tilted in Holden’s favor in that moment.
“We knew we wanted to finish the meet strong and put our best 4×400 time down, but I knew we had locked it up after Ava Young finished third in the 3200m,” said coach Diener. “That was a great race by her, and that place and points put us out of reach of the other conference teams.”
The team win marks the fifth conference title in the last six MRVC-East Meets for the Lady Eagles track and field program with Higginsville disrupting a streak of four straight titles for Holden when the Lady Huskers won last year.

“Holden girls track has a great tradition of winning the conference,” stated first-year head coach Diener. “Taking over this program from coach (Spencer) Gudde, the girls winnig the conference was a goal for our program, and the credit goes to the girls for working as hard as they did to make it all happen.”