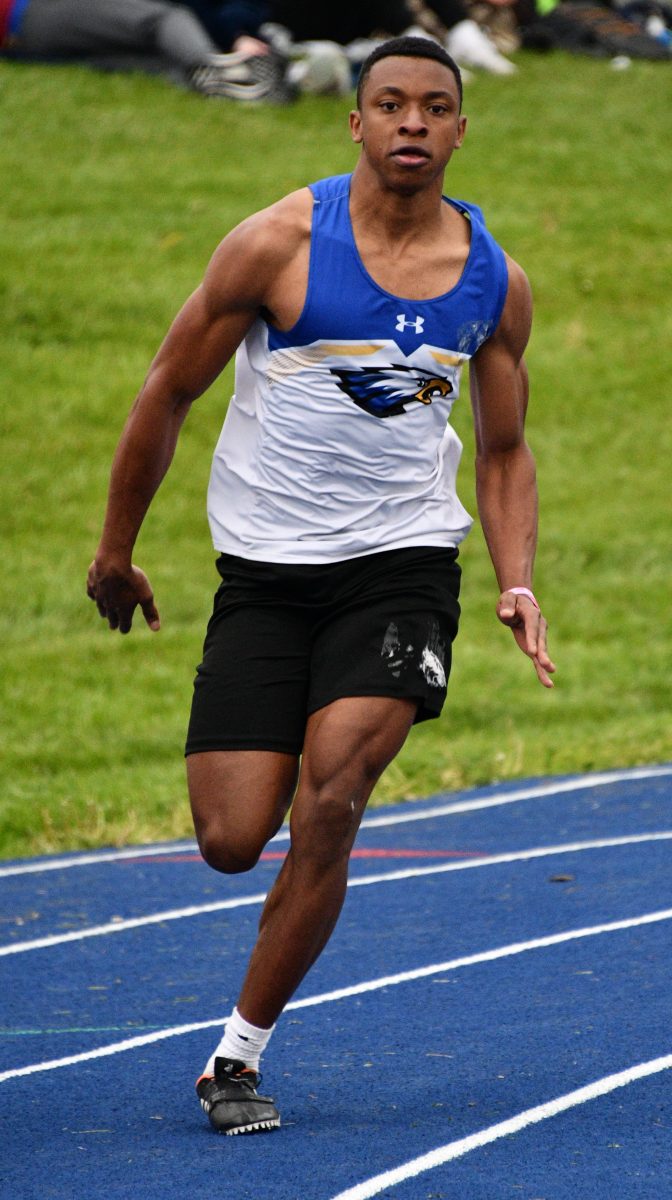 In a third-place team finish for the Eagles high school boys track and field team at the MRVC-East Meet on Tuesday, May 3, hurdler Masyn Powell and distance runner Rett Hankins won individual titles in events.
In all, Eagle athletes earned two first-place finishes, three second-place silver medal finishes, and four third-place fnishes, along with multiple top-six points placings as Holden finished behind Higginsville in first, and Lexington in second in team standings.
“I am extremely proud of our track and field program,” said first-year Holden track and field head coach David Diener. “The assistant coaches have done such an outstanding job getting these kids ready to compete and be successful, and the kids come and work hard for me every day.
“I am thankful for their effort, and excited they get an opportunity to experience success and rewards for their work.”
As the Holden boys team’s only returning all-conference medalist from last season, Powell bettered his second-place 2021 finish in the 110m hurdles by leading the pack in the race this year with a first-place finish. Powell broke the sub-16 second barrier in clocking a time of 15.93 seconds to take the individual title.
With a time of 42.24 seconds, Powell finished just .21 seconds off of the first-place time in the 300m hurdles to earn the second-place all-conference medal. He carried the baton on the second leg of Holden’s 4x400m relay as he, Sam Comer, Wally Walker, and Brian Johnson finished in fifth-place in the race.
“Masyn is really attacking the hurdles right now, and continues to be a steady leg in the 4×400,” said coach Diener. “His dedication to his hurdle craft is going to help him make a deep run in the postseason.”
The freshman Hankins at 11:14.52 finished nine seconds ahead of the second-place finisher in the 3200m run to give the Holden boy’s team its second individual title on the day.
Hankins earned team points with a fourth-place finish in the 1600m run, and carried the baton with teammates Zach Willis, Ethan Rice, and Jackson Treece for a fifth-place finish in the 4x800m relay.
“Rett is a hard worker, and is a guy who does not just go run, he has a plan and executes his plan for each lap,” said coach Diener. “He has a bright future for our distance program here at Holden, and I was very pleased of how well he ran at conference.”
Willis finished in sixth place in both the 1600m run, and the 3200m run as he fought through some leg pain.
Johnson earned individual all-conference honors by placing third in the 400m dash with a time of 52.41 seconds in his senior year conference meet, and earned team points with a sixth-place finish in the 100m dash. The senior sprinter carried the baton on the fourth leg of the 4x100m relay with teammates Sam Comer, Reco Jenkins, and Wally Walker in an all-conference third-place medal finish.
“Brian has been the anchor and leader of our sprint team this year,” said coach Diener. “He ran his best 400 of the year last meet, and it has set him up well for our districts. He is a guy who will be tough to replace next year, but I’m excited for his senior year postseason.”
Comer looks to be in line to fill the shoes of Johnson next season as the now freshman Comer gains sprint experience.
“We are excited for Sam as he continues to develop,” said coach Diener. “He really has helped this 4×100 team get off to a good start, and will help fill the spots of Brian in the future of our program. The 4×100 team all together has been solid all year, and they will make a push at our district meet.”
Senior pole vaulter Wyatt Doutt stepped up to perform as Holden’s number-one vaulter at the conference meet in the absence of injured junior Tyler Hankins. Doutt turned in a second-place finish with a PR height of 3.2m.
“Wyatt is peaking at the right time, and has his goals set to make it out of districts,” said coach Diener. “It is fun to see a senior who has worked as hard as h e has to be making big jumps in PRs towards the end of his senior season.”
Freshman Jayden Ring turned in a points placement in the pole vault by finishing sixth with a PR height of 2.75m.
“Jayden is a great pole vaulting talent,” said coach Diener. “As he continues to get more confident in the pole vault craft, he has the speed to really hit some big vaults over the next three years.”
Also in field events, senior Garrett Abel and sophomore Marshall Doogs both earned all-conference finishes in the discus. Abel placed second, and Doogs placed third. The duo also finished back-to-back in the discus with Abel at fourth place, and Doogs at fifth. Doogs added a fifth-place finish in the javelin as freshman Sauren Folson placed fourth for multiple points placings from the Holden throwers.
“Garrett, Marshall, and Sauren have been working hard all year, and really were the diference in how well our boys team did,” said coach Diener. “They went out and threw well in less than ideal throwing conditions. As a result, they brought home individual medals, and set us up for the third-place finish.”
Rounding out the boys track and field team’s medal placings was Reco Jenkins who placed third for an all-conference finish in the triple jump. Jenkins also scored a team point by placing sixth in the long jump.
Other top-six points placings for the Eagles – 200m dash, Wally Walker, 6th; 110m hurdles, Daniel Mailath, 5th; 4x200m relay, Kasyn Tevis, Trent Stout, Jacob Andes, Carson Moreno, 5th; high jump, Cole Zillner, 4th.
Posted in Sports