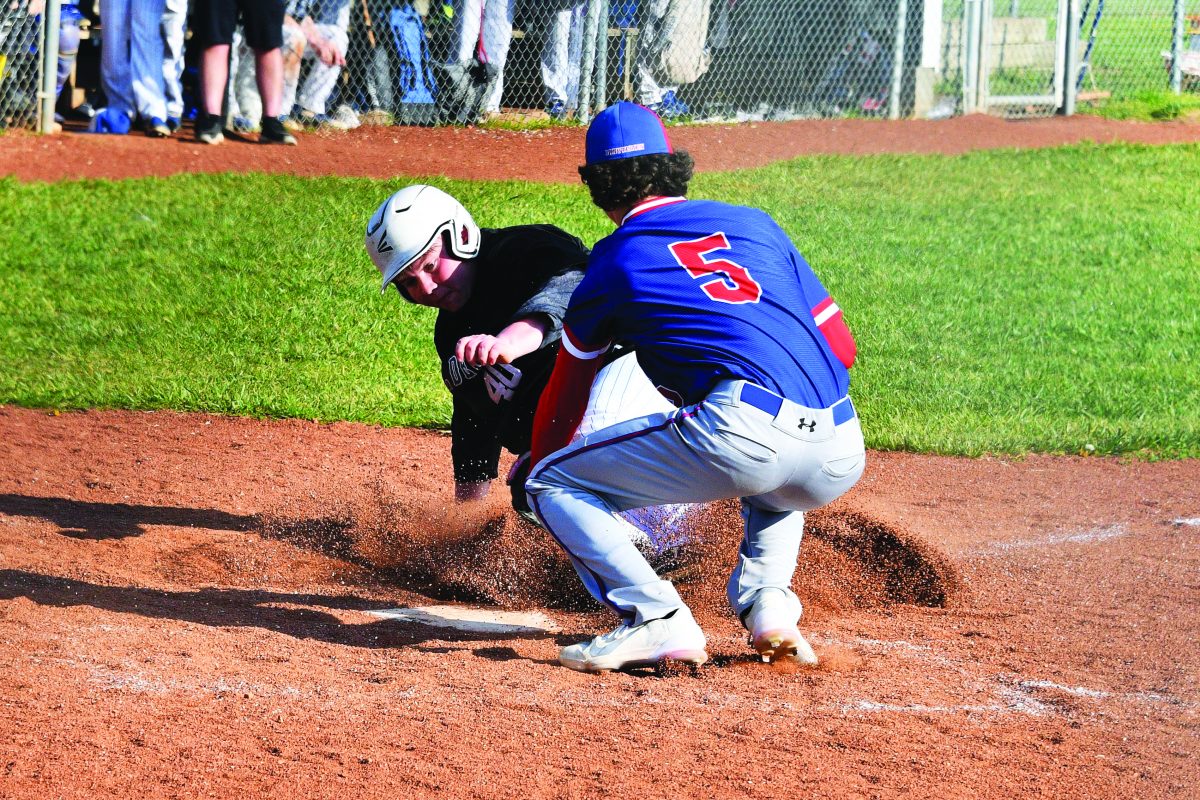 Safe Senior Slide… Eagle senior first baseman Chance Agcopra (40) safely slides in for a run during Holden’s Senior Night game against Lexington on Tuesday, April 26. The Eagles defeated the Minutemen by the final score of 16-0 for a Senior Night victory. Photo by Steve Edwards

The Holden baseball team handily defeated Lexington by the final score of 16-0 in Holden’s Senior Night game on Tuesday, April 24.
After plating one run in the bottom of the first inning, Holden poured on the runs with 15 in the second frame to set the final score in the game which was ended by the run rule when the Minutemen failed to score.
Senior Eagle players Chance Agcopra, Hunter Higgins, and Danny Hartzler were recognized on the field after the game.
“It was senior night, and our three seniors played well,” said Holden baseball head coach Charlie Castle. “Chance Agcopra played first base. He scored two runs after he walked, and was hit by a pitch.
“Hunter Higgins had an RBI single.
“Danny Hartzler had a single with two hit-by-pitches.”
Junior Carson Card scored Holden’s lone run in the first inning on a sacrifice fly by junior Garrett Smith before the spigot opened in the second inning to produce the 15-inning frame.
A single by starting pitcher Lane Siemer plated freshman Aiden Christian in the second inning for Holden’s final run of the game. Seimer’s single set the Eagle team at 10 hits in the contest.
In Siemer’s start on the hill for the Eagles, he allowed just one hit in the shutout victory.
“Lane Siemer was one batter away from a perfect game,” noted coach Castle. “Lexington’s nine-hole hitter blooped a single to right.
“Lane finished with three innings pitched with one hit, and three strikeouts.”
Siemer ended the game on his third strikeout to leave zeros on the scoreboard for Lexington.
the tournament are to-be-determined.
Next Monday, May 9, Holden hosts Richmond for an MRVC-East match-up. The varsity game begins at 4:30 p.m., and is followed by a JV game.
On Tuesday, May 10, Holden plays a makeup game at Richmond. The varsity game begins at 3 p.m., and is followed by a JV game.
Holden is set to host the Class 3, District 14 Baseball Tournament as the number-one seed in the tournament. Holden plays in the semifinal round of the tournament on Monday, May 16 versus the winner of the quarterfinal game between Adrian (8-3) and Butler (9-8). The semifinal game on Monday begins at 4 p.m. at the Holden High School baseball field.
Posted in Sports