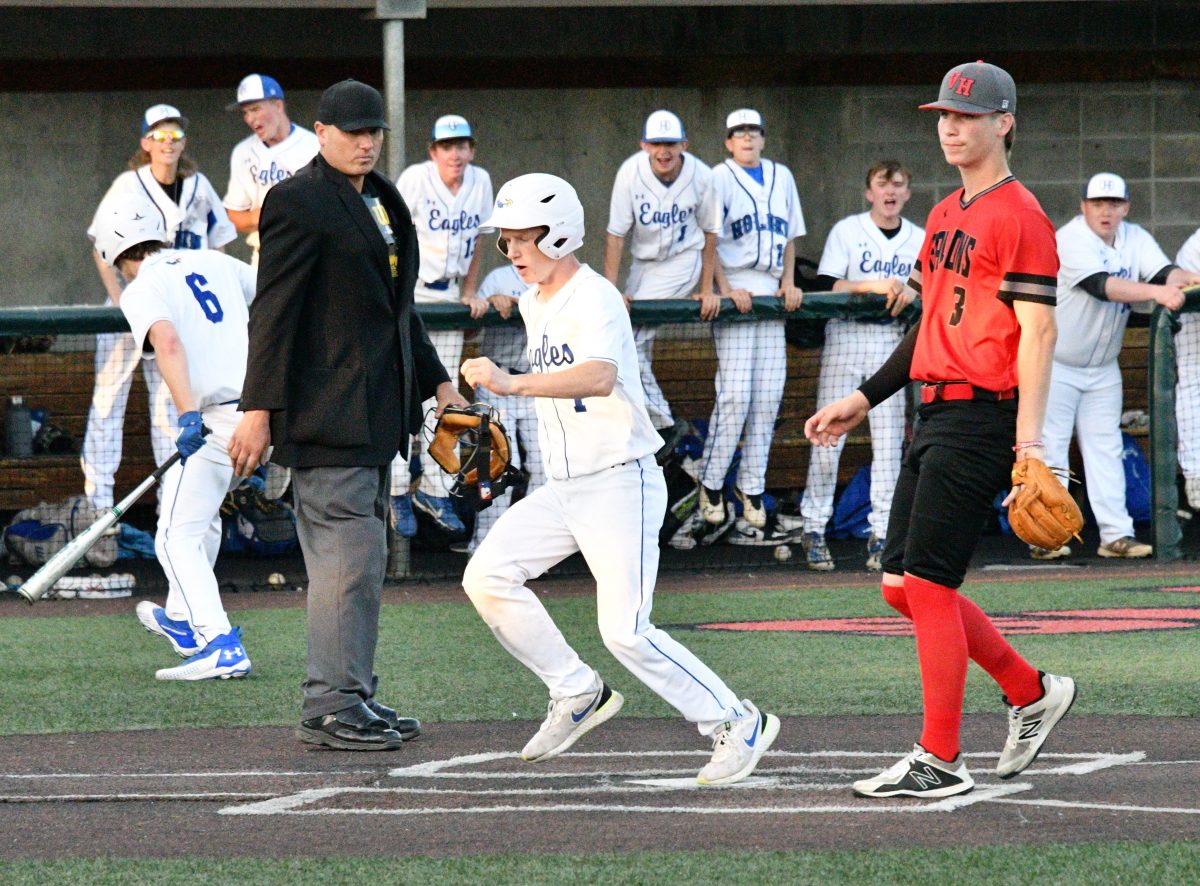 Extra Inning Winner… Eagle pinch runner Travis Bruns crosses the plate on a passed ball in the bottom of the ninth inning during Holden’s game against Van Horn at Crane Stadium on Friday, April 22. Bruns’s score represented the winning run in the extra-inning game that went to Holden by the final score of 9-8. Photo by Steve Edwards

After nine innings of play, the Holden baseball team surfaced with a 9-8 victory over Van Horn on Friday, April 22.
Giving up five runs in the second inning for an early 6-1 deficit to the Falcons forced a comeback situation for the home team in the game that was played at Crane Stadium on the UCM Campus.
After a frenzied rally to tied the score at 8-8 at the end of regulation, pinch runner Travis Bruns trotted across the plate with two outs in the bottom of the ninth inning for the winning run.
“We had a really bad second inning mentally,” said Holden head coach Charlie Castle. “They scored five runs on just one hit.”
The game featured 17 total runs in 10 innings with Van Horn collecting 11 hits, and Holden scattering eight hits. The Falcons fumbled for five errors as the Eagles posted two errors.
In what came to be the final inning of the game, Bruns entered the contest for Lane Siemer who had been hit by a pitch with two outs.
Bruns hustled to third base on a bloop single hit by teammate Garrett Smith. The Falcons intentionally walked Aiden Morarity to load the bases.
With Danny Hartzler at bat, a wild pitch to the deep backstop on Tompkins Field at Crane Stadium allowed Bruns to gallop to home plate.
“There was lots of craziness in this game,” noted coach Castle. “We would have liked to have played better on a big stage like UCM.
We came out very flat, but we found a way to get it done. That just seems to be the identity of this team right now.”
Hartzler, Carson Gard, and Morarity each saw time on the mound with Morarity receiving credit for the win in the closing role.
Aiden Christian and Garrett Smith each had two hits to lead Holden.
At the end of last week, the Holden baseball team held an overall record of 14-1, and stood at 4-1 in MRVC-East play.
This Saturday, Holden hosts Lawson for a JV game at 10 a.m. which is followed by a varsity doubleheader.
Posted in Sports