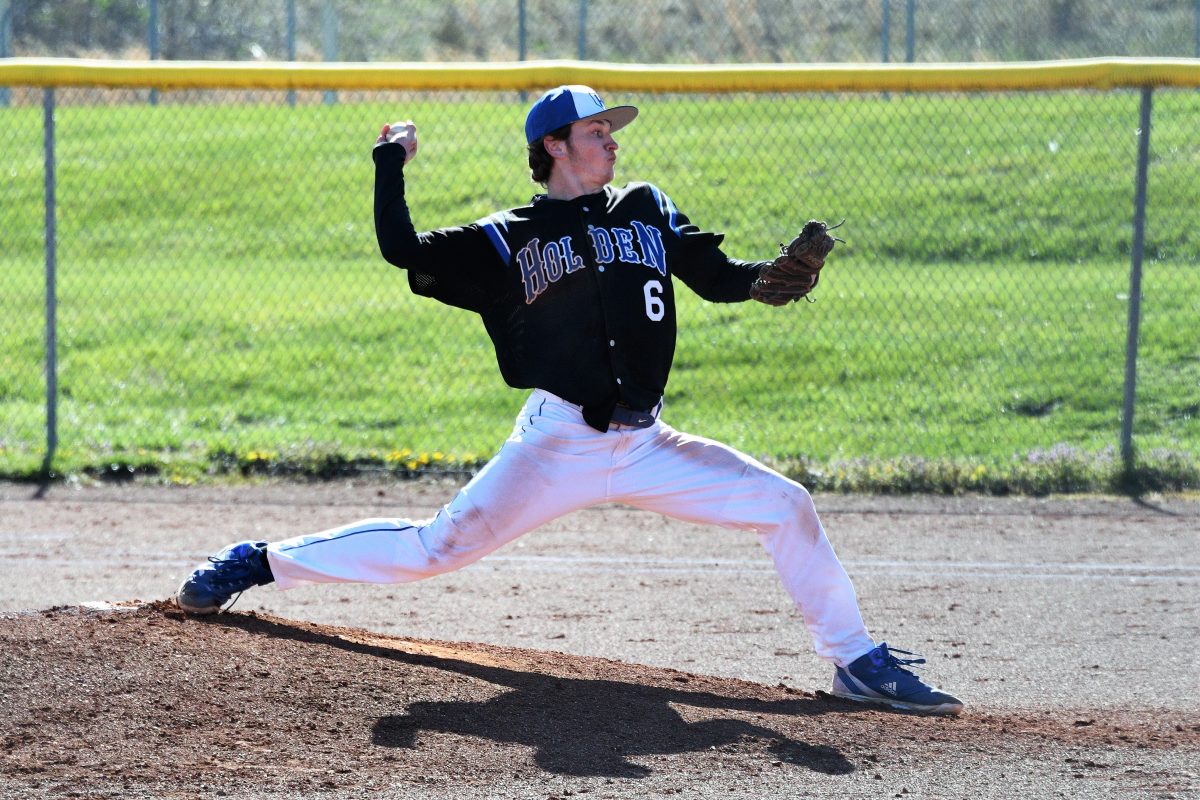 Downhill Delivery… Eagle starting pitcher Danny Hartzler delivers to the plate during Holden’s game at Crest Ridge on Monday, April 18. Holden won the game by the final score of 6-5. Photo by Steve Edwards

In a non-conference game at Crest Ridge High School, the Holden baseball team played to a 6-5 win over the Cougars on Monday, April 18.

The Eagles jumped out to an early 2-0 lead as the Cougars kept the game close.

“We’re happy to get a win,” said Holden baseball head coach Charlie Castle. “They were the better team today. We talked about how good teams find a way to win. We did do that. We did not play up to our capabilities, I did feel like, and some of that’s because they did some good stuff, too.”

In the bottom of the first inning, Cougar catcher Wyatt Ducos cut the lead in half with a lead-off solo home run.
After Ducos’s blast, the Holden defense held Crest Ridge off the scoreboard with solid defensive plays behind starting pitcher Danny Hartzler.

Holden added a run in the second inning on a single by Gard that plated Kale Tryon who singled, and stole a base in front of Gard.
Cougar starting pitcher Theo Feldman doubled to lead off the bottom of the third inning, but would be picked off on a throw from Hartzler to second base.

The pickoff of Feldman proved costly for the Cougars as Ducos homered two batters later for his second solo shot of the game, leaving Crest Ridge trailing by one run again with the score at 3-2.

“We’ve talked all year at the bottom of the order we don’t want them to steal because the two sticks we’ve got at the top of the order are pretty good, and we can’t take the bat out of their hands,” said Crest Ridge baseball head coach Rick Schmidli.

Hartzler was replaced by Eagle reliever Aiden Morarity with one out, and one runner on in the fifth inning.

The Eagles elected to intentionally walk Ducos in his third at-bat of the game during the fifth inning.

Crest Ridge tied the game on a hit batter that pushed a run across the plate with the bases loaded.

In the sixth, the Eagles regained the lead on a ground out by Siemer that scored Tryon after he singled to open the inning.
Holden added two runs in the top of the seventh. One was scored on a solo home run by Morarity.

Two batters later, Hunter Higgins drew a walk. Tryon plated Higgins with a double for Holden’s final run of the game, and a 6-3 lead.

Ducos singled to open the bottom of the seventh, and would score later in the inning as the Cougars mounted a comeback effort.
Jackson Nimsgern followed Ducos with a single. A ground ball by Daniel Doak put Nimsgern out at second, leaving runners at first and third. Cougar relief pitcher Conner Buttram singled to plate Ducos.

Doak scored on a ground out by Corben Martin for Crest Ridge’s final run of the game.

Morarity ended the contest with a strikeout to hold on for the 6-5 win with one Cougar stranded in the seventh.

For Holden, Tryon totaled three hits with one RBI, and one run scored.

Siemer ended the game with two hits, one RBI, and one run scored.

Morarity had the one home run for one hit.

Hartzler worked through 4 1/3 innings on the mound in the start for Holden. He allowed two runs on four hits, and one walk while striking out three batters.

“Danny started, and except for the leadoff batter’s two home runs, was solid,” said coach Castle.

Morarity earned the win in relief. He had one earned run (3 total) with two hit batters, and two strikeouts.

“Aiden was solid,” said coach Castle. “Sometimes he’s got that swing-and-miss stuff. I was hoping for more of that, but those kids battled. I’ll give them credit for that. I was just more frustrated with our offense. We did not have good approaches at the plate, except for Kale Tryon and Lane Siemer. I thought those two were by far our best hitters.”

For the Cougars, Ducos had three hits (2HR) two RBIs, and one walk. Buttram had one hit, and one RBI. Doak scored one run, and was hit by a pitch.

In the start on the mound, Feldman allowed one earned run (3 total) on five hits, three walks, one hit batter, and two strikeouts.

Coach Schmidli assessed the team’s performance after dropping two games the week before.

“It’s the little things,” said coach Schmidli. “We gave up only two unearned runs. We’ve got to learn to be better ballplayers from that aspect, but from that aspect, the kids played well against a very good team. Charlie’s got a great team, and we knew they were going to be very good. Overall, we were pleased with how they’re playing. As long as I can see that we’re getting better, and tonight I saw where we got better. It was a good night.”