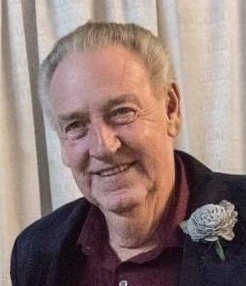 He was the son of Murvin Earl and Grace (Johnson) Manford. Danny was a lifelong resident of Holden, Missouri, graduating from Holden High School in 1965.

On August 23, 1971, Danny was united in marriage to Sharon Kay Holmes in Miami, Oklahoma.

In the early years of their marriage, Danny and Sharon bought a large Victorian home in Holden and began a lifelong restoration project.

Danny took great pride in what they had accomplished over the years to restore their home.

This home was always full of love, laughter and good times for family and friends, and the coffee pot was always on.

Danny was an avid NASCAR fan and enjoyed watching and attending NASCAR races with family.

He enjoyed “tinkering” in his garage and sitting on his porch waving and visiting with all those who passed by.

Most of his adult life, Danny worked as a truck driver and was a member of the Teamsters Union, Local #541, Heavy Hauler.

Before his retirement in 2013, Danny had worked for more than 20 years for J.A. Lillig Excavating. Danny had a kind, compassionate, outgoing personality, with just a touch of “wicked humor.”

He could start a conversation with complete strangers, and by the time the conversation ended, he would know their life history, who their relatives were, their address, and most likely had exchanged phone numbers.

Danny was a true and loyal friend and the first to volunteer to help anyone in need.

Danny’s family was the most important thing in his life.

Danny gave a nickname to all those he loved and once he “named” you, that’s who you were for the rest of your life.

He valued his role as patriarch of his family and worked hard every day to and family and Justin and Rebecca McConville and Maddie; other relatives and many, many friends.

Per Danny’s wishes, cremation has been accorded.