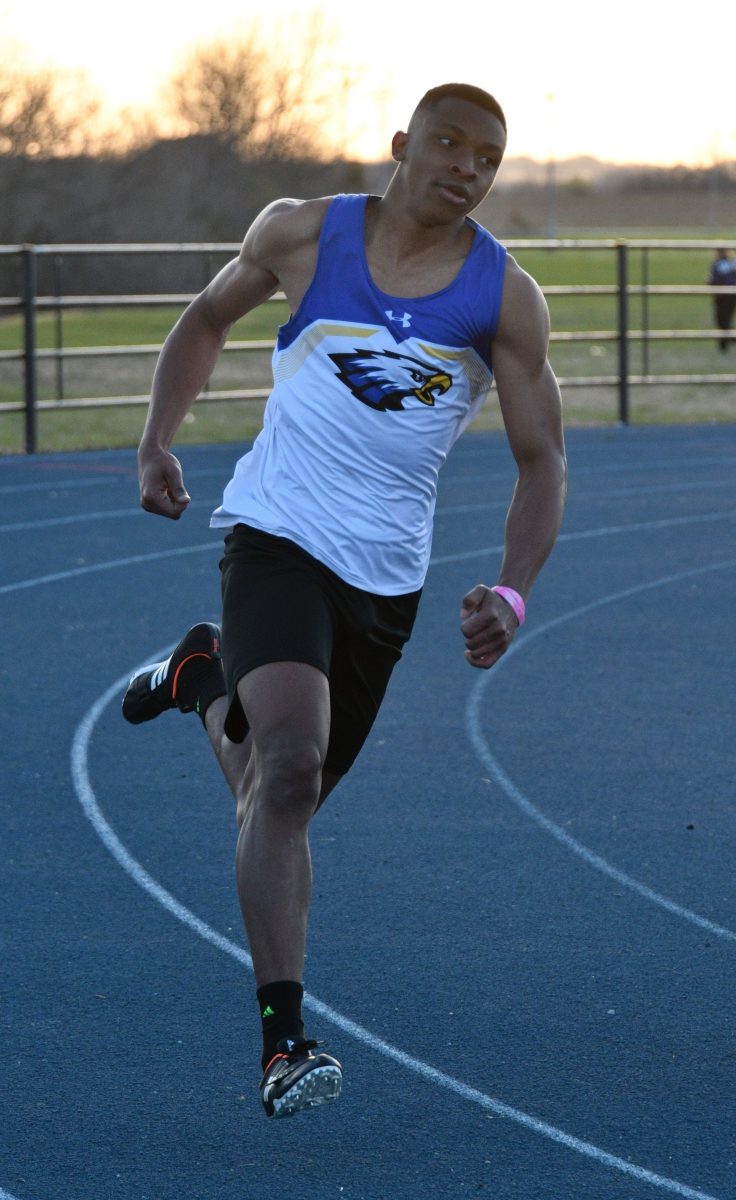 Strong Sprints… Eagle senior Brian Johnson rounds the first curve of the 400m dash on his way to a second-place finish at the Holden Eagle Invitational Meet on Friday, April 8. Johnson also placed second in the 100m dash, and carried the baton with teammates Sam Comer, Reco Jenkins, and Wally Walker for a fifth-place finish in the 4x100m relay. Photo by Steve Edwards

Competing in cold, windy conditions, the Lady Eagles track and field team won the first place team trophy at the Holden Invitational Meet on Friday, April 8.
The Holden boys track and field team placed fourth at last Friday’s home meet.
“It was a busy cold night, and our kids competed very well,” said Holden track and field coach David Diener. “I was proud of some individual efforts, and also some team efforts.”
Senior Liz Stout secured two first-place finishes in field events by gathering gold medal finishes in both the discus, and the shot put as multiple team members contributed points to the girls team’s win.
“Liz got first in both shot and disc,” highlighted throwers coach Mark Weddle.
In the discus, Stout recorded a season-best distance of 34.12m. She posted a put of 11.12m to win the top shot spot, and placed fourth in the javelin.
Freshman Kia Harmon tied teammate Marah Klover on the school record leader board in the high jump by clearing 1.6m. Harmon’s height placed her second on the day.
Klover cleared 1.45m to place third last Friday. Earlier in the week at the Pleasant Hill Meet, Klover set the school record at 1.6m.
“Kia tied Marah’s school record,” highlighted coach Diener. “Both are having great seasons. Coach (Dale) Wescott continues to see and make adjustments to their forms, and approaches. Their high jumps are able to score two sets of high points in one event, and are big reasons for our girls team success. The girls will continue to be competitive with each other, but it is more of a team score attitude from both of them as they keep pushing that school record to higher marks.”
Harmon tacked on second-place finishes in both the 100m dash, and the long jump to her high jump finish last Friday.
Hurdler Millie Davidson placed second in the 100m hurdles with a season-best time of 17.80 seconds, and placed fourth in the 300m hurdles.
Freshman hurdler Lilee Keller took a fifth-place finish in the 100m hurdles, and placed sixth in the 300m barriers race.
In another medal finish, Gracie Carver clocked a time of 2:42 in the 800m run to place second.
Macie Remington placed second in the triple jump with a distance of 8.55m.
“We had some great efforts in our field events,” noted coach Diener. “The girls went two, three, four in the pole vault.”
Vaulter Izzy Guinn led the sweep by placing second with a height of 2.3m to match her career-best height. Elaina Young placed third, and Natalie Moss placed fourth with season-best heights.
Peyton Kilgore placed third in the discus, and Klara Tschoepe placed third in the javelin to add to the team’s field event showing.
On the track, Clara Hernan placed fifth in the 200m dash, and seventh in the 100m dash.
Distance runner Ava Young placed sixth in the 3200m run.
Rachel Wamsley placed seventh in the 200m dash. Emma Lohe placed seventh in the long jump to round out top-eight individual finishes for the girls team.
The Lady Eagles 4x400m relay team of Guinn, Lohe, Klover, and Carver closed out the meet with a first-place finish in a time of 4:37.50.
For the boys team, hurdler Masyn Powell won the 110m hurdles race, and placed second in the 300m hurdles.
Senior Brian Johnson took second-place finishes in both the 100m dash, and the 400m dash. Johnson clocked a season-best time of 11.81 seconds in the 100m race.
Johnson, Sam Comer, Reco Jenkins, and Wally Walker carried the baton in the 4x100m relay for a fifth-place finish.
Distance runner Rett Hankins placed fourth in the 3200m run, and fifth in the 1600m.
Zach Willis placed seventh in the 1600m run, and fifth in the 3200m run. Freshman Caleb Koehn clocked a season-best time to place eighth in the 3200m.
Michael Rinella placed fourth in the 800m run with a time of 2:17.
In top field event finishes, Tyler Hankins placed fourth in the high jump, and fifth in the pole vault. Reco Jenkins placed fifth in the long jump, and sixth in the triple jump.
Garrett Abel placed fifth in the shot put with a season-best distance of 12.15m.
“Garrett didn’t place, but he threw over 12 meters,” noted coach Weddle.
Wyatt Doutt recorded a season-best height in the pole vault to place eighth. Freshman Sauren Folson recorded season-best distances in both the discus, and the javelin to place eighth in each.
“We had a really great showing,” summarized coach Diener. “I’m extremely proud of the kids. For our girls team to come out, and as a team beat those teams is a really great mark in the middle of the season. Overall, to battle these elements, the opportunity to be in front of our fans here, you’re always going to want to do well. We had a lot of PRs, and I’m proud of the kids.”
Posted in Sports