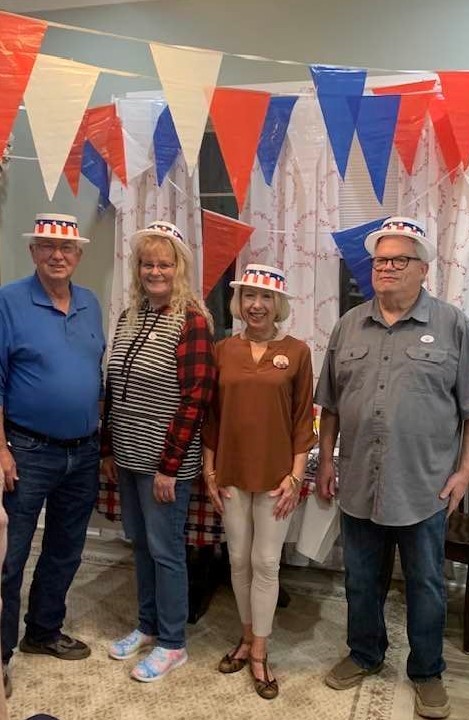 Democracy In Action! Victory Party Held!… Voters elected all new faces in city government leadership last week. A watch party turned into a victory party as final results came in on Election Night, which was Tuesday, April 5. It became apparent that the vast majority of Holden residents voted overwhelmingly for change in their city leaders. New councilmen and women were elected, as well as a new mayor to lead our town for the next four years. More than a dozen ecstatic residents attended this particular watch party, in which all of the candidates were victorious in their bid for open seats in Holden’s government. Pictured, left to right, Mayor-Elect Ray Briscoe, and Councilmen/Women-Elect – Julie Getz, Ward I; Carol Mallory, Ward II; and Allen Mensch, Ward IV. Also elected but not in attendance was Larry Miller, Ward III.  Photo Submitted

Residents made their voices heard when they exercised their Constitutional right to vote and got involved in the future leaders of our community, school board, and other issues, as they headed to the polls in large numbers on Election Day.

It was apparent as the polls closed that citizens voted for change, especially in city government.

In the race for Mayor of the City of Holden – N. Ray Briscoe soundly defeated former mayor, Doyle E. Weeks, Sr., by a margin of 417 votes to 49.

Briscoe received 88.35 percent of the vote, while Weeks received 10.38 percent of voter support.

In vacancies on the Holden City Council, there were seats open in all four Wards.

The results are as follows: Ward I – Julie Getz won the open seat with 54 votes; Sharon Manford received 20 votes; and Elizabeth Weeks, (former council incumbent and mayor), finished with 16 votes.

Holden R-III School Board results are as follows: Citizens voted to fill two vacancies – and elected Nathan Haun, with 528 votes; and Gerilynn Hoover, who received 411 votes.

For Emergency Services Board – Western Commission District Board Member – Larry Jennings won the seat with 1,448 votes; against 20 write-in votes. Holden R-III School District Proposition FORWARD – Holden voters were in favor of Prop FORWARD, as the measure passed by a resounding total of 641 affirmative votes, to 355 votes against the Proposition.