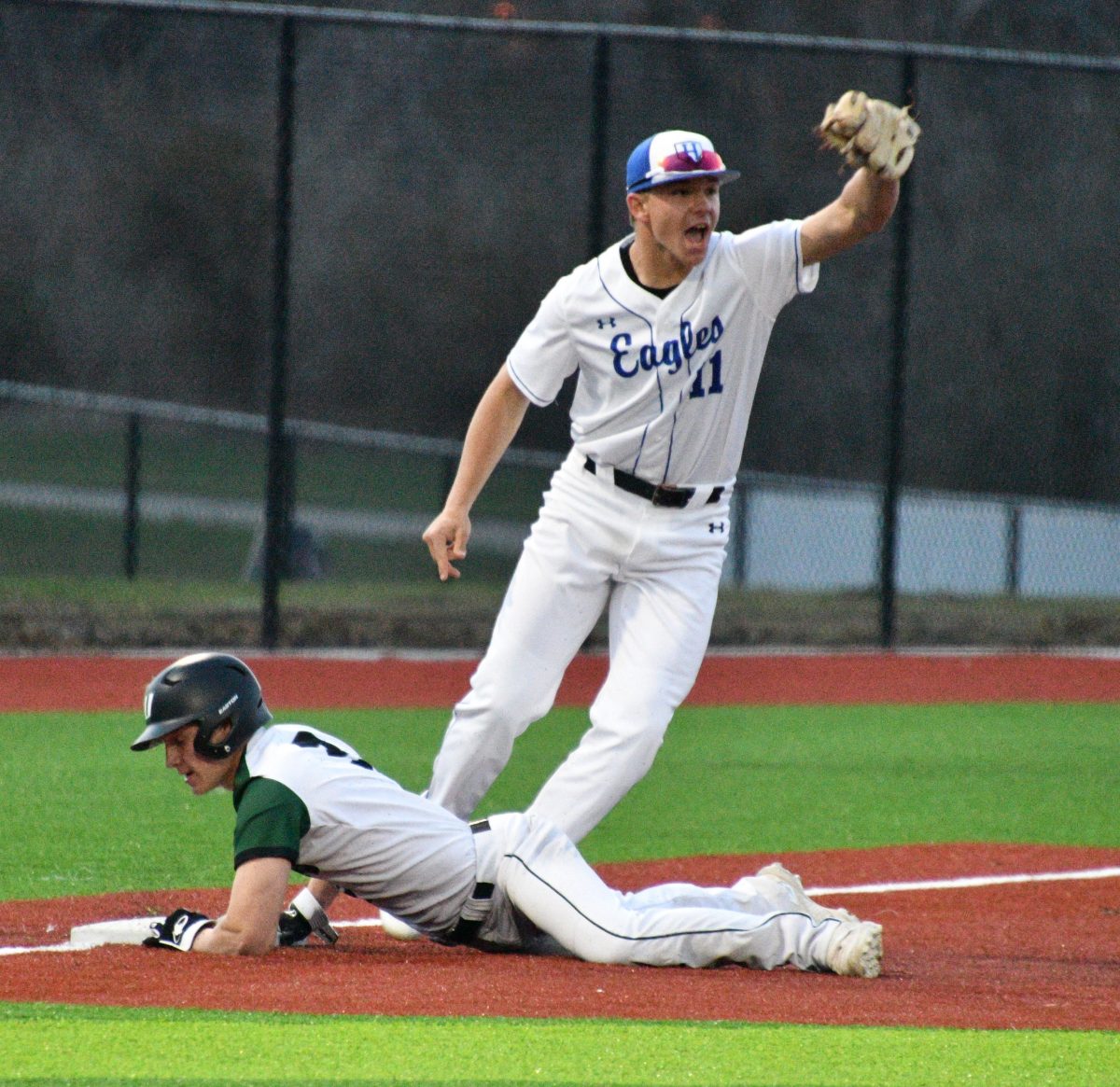 In a rematch of last year’s Class 3, District 13 Baseball Tournament championship game, Holden played to an 8-7 win over Warsaw on Friday, April 1.
This year’s game resembled last year’s title game in that the contest was moved to an alternate site with an all-weather turf field as Warrensburg High School served as the site for the game which was originally scheduled to be played in Holden. Last year, the district semifinals and district championship games were played on the turf field at Versailles High School due to weather conditions.
Though this year’s regular season game between the two teams carried less overall weight, the victory kept the Eagles’ record unblemished at 5-0, and provided another early-season win over a traditionally strong opponent.
“It was a good win over a high-quality team,” said Holden baseball head coach Charlie Castle. “We made it a lot harder than it needed to be, though. Any time we play Warsaw, strange things seem to happen.”
Last year’s district championship game between the two teams involved a late night into early morning showcase that kept the scoreboard operator busy in a back-and-forth, 16-inning game wtth a 17-16 final score in favor of the Wildcats.
Last Friday, Holden lit up the scoreboard early on with seven runs in the bottom of the first inning after Warsaw plated a run in the top of the frame.
As the scoring dried up for Holden on the moist turf field at Warrensburg High School, the Wildcats chipped away at Holden’s lead with a run in the third inning, and three runs in the fourth. All three of the runs scored in the fourth inning were a result of errant Holden pitches that found their way to the backstop with a runner on third base.
A run scored by Waraw in the fifth inning left the Wildcats trailing by one with the score at 7-6.
“I thought we swung the bats pretty well even after the first inning,” said coach Castle. “We only scored one run after that, but we still had some hard contact. It was just right at them, or they chased it down in the outfield.
“We had some lapses on defense that put runners on in the middle innings that led to the passed balls, and wild pitches on which five of their runs were scored.”
Eagles courtesy runner Americo Mabrey stole home plate in the fifth inning to give Holden a valuable two-run pad with the score at 8-6.
“That was a  big insurance run, and helped stem all the momentum they had,” said coach Castle of Mabrey’s run that came when Warsaw’s catcher threw to second base on a steal attempt by Eagle runner Hunter Higgins.
The Wildcats opened the top of the sixth inning with a triple, and scored their seventh run of the game on an RBI single that followed. The Wildcat runner advanced to second as Warsaw threatened to gain control of the game with one on, and no outs.
On the next at-bat, Holden relief pitcher Aiden Morarity coaxed a fly ball to right field that was caught by Wyatt VanMeter. The Warsaw runner on second base tagged, and tried to reach third base. VanMeter’s throw to third base was handled by cutoff man Lane Siemer who threw to third baseman Garrett Smith for the putout.
A ground out from Warsaw’s next batter ended the Wildcat threat.
“Wyatt VanMeter came in as a replacement, and had a big assist from right field when a runner tried to tag up in the sixth,” highlighted coach Castle. “He made the catch, then relayed to second baseman Lane Siemer who then fired a strike to third baseman Garrett Smith to tag out the runner.”
Following a scoreless bottom of the sixth from Holden, and a scoreless top of the seventh from Warsaw, the game ended with the home team Eagles ahead 8-7.
“Danny Hartzler was the winning pitcher,” said coach Castle. “He pitched well. He went three innings, and allowed one earned run on three hits with three walks, and one strikeout. He definitely did his job of making them put the ball in play.
“Catcher Aiden Christian was two-for-three at the plate with a double, two RBIs, and a stolen base,” continued coach Castle. “Aiden Morarity picked up the save. Aiden went four innings, and only gave up one earned run with two walks, four strikeouts, and three hits.”
At the plate, Morarity had 2 hits, and 2 RBIs. Higgins had 1 hit, and 1 RBI. Also hitting safely were Siemer, Smith, and Carson Gard.
At the end of last week, the Holden baseball team held an overall record of 5-0, and an MRVC-East mark of 2-0.
This Friday, the Eagles host St. Michael the Archangel. A varsity game will be played at 4:30 p.m. on Friday. A JV game follows the varsity game.
By The Numbers…In their last two meetings, the Holden and Warsaw baseball teams have combined for 48 total runs, and 23 innings of play…during the 2018-19 season, the two teams opened the season with a doubleheader in which they split games…during that 2019 doubleheader split, the two teams combined for 32 runs on the day…the first of those games went into four extra innings of play with Holden taking the win…Warsaw won the second contest on the day in a run-rule shortened, six-inning game.
Posted in Sports