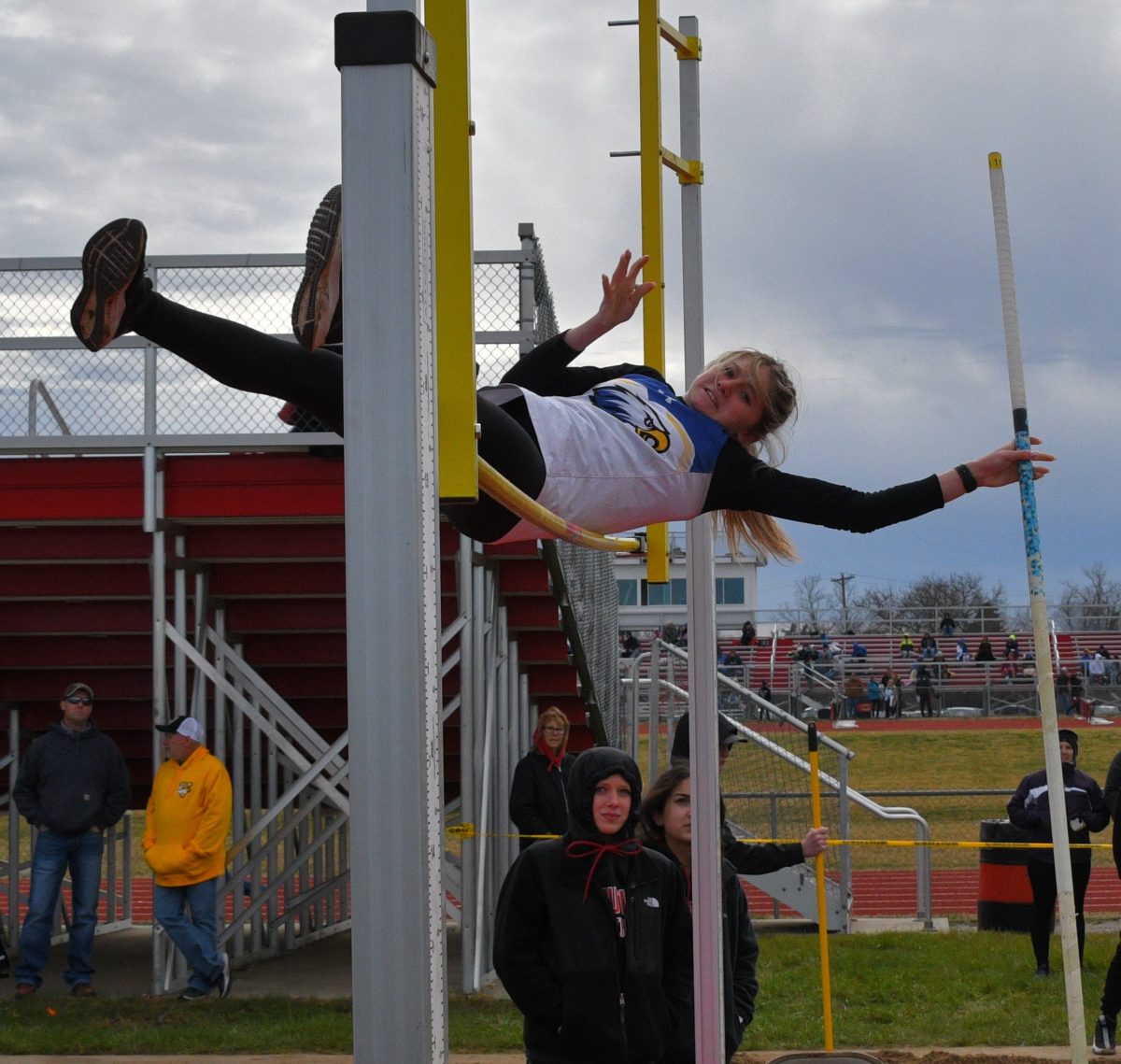 Over The Bar… Lady Eagle freshman pole vaulter Izzy Guinn grazes the bar on a successful pole vault attempt the Butler Bear Invitational Meet on Friday, March 25. Guinn placed third in the event with a final height of 2.2m. Photo by Steve Edwards

“I am overall very pleased with how we’ve done with our official full meet,” said Holden track and field head coach David Diener. “There haven’t been very many events that you haven’t heard at least one Holden name, or a couple Holden names in the top eight.
“Our girls relays all placed,” noted coach Diener. “Our girls 4×800 finished third.”

Wamsley ran the final leg of the race after losing her left shoe during the handoff from Hernan.

“In our girls 4×200, we had two first varsity meet racers, and we finished fourth,” noted coach Diener as Hernan and Kendrick gained their first meet experience. “And Rachel ran her 200 without a shoe.”

Spring, Wamsley, Kia Harmon, and Izzy Guinn toted the baton in the 4x100m relay race for a fourth-place finish.

“As far as our times, they’re competitive, and there are things we can keep improving on,” said coach Diener in regard to Holden’s relay team performances.

In individual events, Carver placed fourth in the 800m run.

Davidson took fifth-place in the 100m hurdles, and placed seventh in the 300m hurdles.

Harmon placed third in the 100m dash, fourth in the high jump, and sixth in the long jump to contribute 11 points to the team total.

“Kia finished third in the 100 as a freshman,” highlighted coach Diener of the first-year varsity runner who early in the meet said she had a rough day in the high jump. “A rough day for her is still fourth place.”

Hernan placed ninth in the 100m dash for a top-10 finish.

“Clara is going to make an impact on the team,” said coach Diener.

In the javelin throw, Klara Tschoepe placed third to earn a medal.

“We had Klara, one of our foreign exchange students finish third in the javelin,” noted coach Diener.

Guinn placed third in the pole vault. She was followed by Elaina Young who placed fourth.

“Both of our guys and girls teams have put in great work to start the year, and to see their work pay off in the season brings some momentum to these next few weeks of meets,” summarized coach Diener.

The next meet for the Holden high school track and field teams is scheduled for this Friday, April 1, at Odessa High School at 4 p.m.