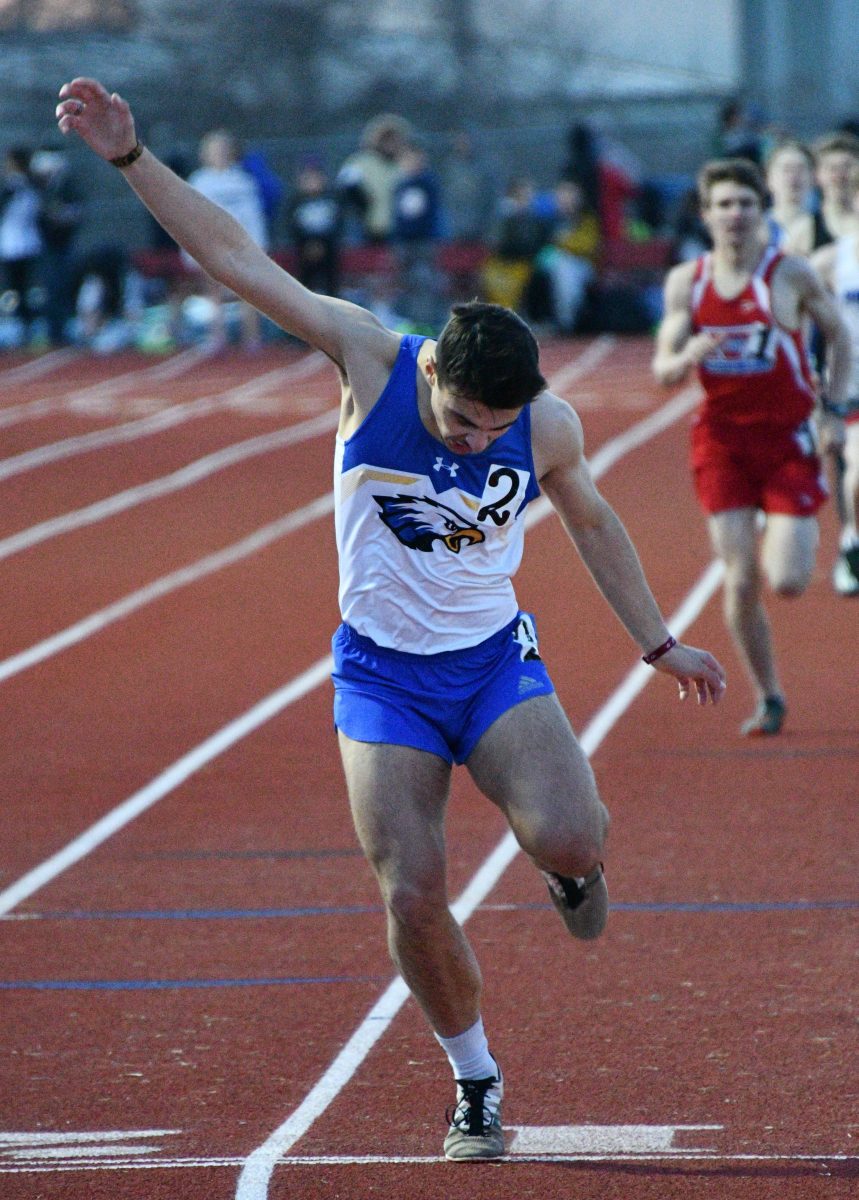 All Out Effort… Eagle senior Michael Rinella lunges at the finish line as he placed first in the 800m run at the Butler Bear Invitational Meet on Friday, March 25. Photo by Steve Edwards

The Holden boys track and field team racked up 111 team points to win the Butler Bear Invitational Meet on Friday, March 25 with 15 boys team competing on the day.

“I am overall very pleased with how we’ve done with our official full meet,” said Holden track and field head coach David Diener near the end of the meet. “There haven’t been very many events that you haven’t heard at least one Holden name, or a couple Holden names in the top eight. With a big meet like this, and with this many schools here, we’re very pleased.”

The top performance on the Holden boys team came from senior Michael Rinella who turned in a first-place finish in the 800m run with a time of 2:19.

“Michael winning his 800 was a really good showing there,” said coach Diener.

In the 4x800m relay, Rinella ran with teammates Zach Willis, Ethan Rice, and Rett Hankins for a fourth-place finish.
Willis added a silver medal to his day by placing second in the 3200m run in a photo finish with Hankins who placed third, just two-hundredths of a second behind Willis.

Johnson teamed up with Reco Jenkins, Wally Walker, and Samuel Comer for a fourth-place finish in the 4x100m relay.

Jenkins added fifth-place finishes in both the long jump, and the triple jump to go with his fourth-place relay team finish.

“Our guys 4×200, they finished seventh, and those are four freshmen,” emphasized coach Diener.

“Masyn finished second in the 110 hurdles by one-hundredth of a second,” noted coach Diener. “Masyn also finished third in the 300 hurdles, so we had people place everywhere.”

Senior Garrett Abel took the bronze medal in the discus with a third-place toss of 33.08m. Marshall Doogs placed seventh in the discus, and eighth in the javelin. Keyghin Orcutt added points by placing sixth in the shot put.

Holden’s 4x400m relay team of Powell, Tevis, Walker, and Johnson placed fifth in a time of 3:55 to score the final points in the team win.

“I am very excited for our boys track and field team on their team win,” said coach Diener. “It was very much a team effort as we only had one event that did not score team points. Both of our guys and girls teams have put in great work to start the year, and to see their work pay off in the season brings some momentum to these next few weeks of meets.”

The next meet for the Holden high school track and field teams is scheduled for this Friday, April 1, at Odessa High School at 4 p.m.